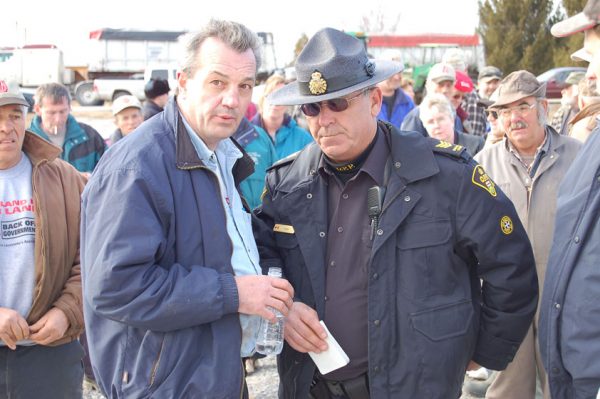 MPP Randy Hillier surprised many with the announcement he would not be seeking re-election in this spring’s provincial election. Hillier is pictured here in a file photo from his Ontario Landowner Association days.

LANARK — He bootstrapped a political career on the central demand that government “back off” as Ontario Landowers’ Association co-founder and rural rabble rouser. Now MPP Randy Hillier (Independent, Lanark-Frontenac-Kingston) is backing off and bowing out.

“A message that will be greeted with sadness by some, and … glee by others,” the bombastic Hillier conceded in his March 3 announcement via an online video titled “End of a Chapter.”

He had previously announced he would run for the Ontario ‘New Blue’ Party in the June 2 election.

The aboutface by the onetime farmer-focused activist surprised some political observers, given how much he seemed to relish being a thorn in the side of his former colleagues on the Ford government benches, especially during the pandemic.

“In my view, I’ve come to the conclusion that there is not a political solution to what ails our society,” Hillier, first elected in 2007, declared. “The division, the polarization, the animus, the censorship, the suppression of views, these will not be fixed politically,” he said, adding he will continue to be “outspoken.”

In a 15-year career at Queen’s Park, the 64-year-old former electrician has spent precious little time on the government side of the aisle, which may have been the best outcome for a man seemingly hardwired to oppose authority. Only with his fourth consecutive election win in 2018 did he briefly find himself on the ruling benches with the new PC government that had defeated the longstanding Liberal regime. Hillier went independent in 2019, however, when Premier Doug Ford booted him from the Tory caucus after he allegedly insulted the parents of autistic children in the Legislature.

John Vanderspank formed the Lanark Landowners’ Association with Hillier in 2003, the organization that morphed into the Ontario Landowners’ Association before the duo had a falling out. The Renfrew-area cash-cropper nonetheless credited Hillier with showing farmers how to stand up to government overreach in rural Eastern Ontario at the time.

“He opened our eyes to show us what we really could do,” Vanderspank said. “He showed us our rights. He made me a lot stronger, and since then I’ve been able to deal with the municipality, with the police … so he helped me out that way,” he said.

“We got a lot accomplished…. He showed us how much strength we really had.”

At the same time, Vanderspank acknowledged “lots of aspects about Randy I don’t like.” In that vein, Hillier’s activism “was pretty much always just for Randy,” he said.

It carried over to Queen’s Park, where Hillier “pretty much stabbed in the back” every PC leader he served under, Vanderspank also asserted.

But he also expressed agreement with Hillier’s vocal opposition to pandemic mandates over the last couple of years, adding the outgoing MPP “always had the press against him. I saw that 15 or 20 years ago.”

Hillier “was basically done” as a political force once he ceased to be a PC MPP, Vanderspank suggested, with little prospect of playing more than a spoiler in his riding if he chose to stay on the ballot as an independent.

Stittsville sheep farmer Tom Black, another early Landowners’ Association adherent and former OLA president, similarly credited Hillier with showing farmers “how to fight back” against bureaucracy. “He was extremely good at rallying a crowd,” he recalled.

But Hillier had “bigger dreams” and aimed to turn the OLA into a political party, an “angle” not appreciated by the membership when he sprung it on them in 2005, Black said. The ensuing disagreement prompted Hillier’s acrimonious departure from the Landowners. Members were otherwise immersed in fallout from the Mad Cow disease crisis as a top concern at that time, Black explained.

“We were the people on the ground with the tractors and the cows, saying that things needed to get fixed. We didn’t have bigger dreams,” Black said.

“We were fighting for democracy, a voice, but in the group, there was no democracy. Randy was the sole voice” and what he said was the law.

Black emphasized that he bears no animosity toward Hillier, adding, “I’m just never 100 % sure of his intentions. Is it for Randy or the people he’s trying to help?”

In his video swan song, Hillier conceded his stance on COVID-19 measures had “put him offside with public opinion” and “the narrative that we were living in the most dangerous times … that warranted the destruction of our representative democracy, warranted states of emergency, and the suspension of civil liberties, the trampling of our Charter-protected rights and freedoms.”

“Many people in the public clamoured and encouraged our governments to take these excessive measures, to allay their fears, to allay the anxiety,” he observed. “We have, in effect, been ruled by the mob for the last couple of years, and I don’t see that ending anytime soon.”

More recently, Twitter has banned Hillier and his colleagues at the Legislature have voted to no longer recognize him, after he likened the provincial and federal cabinets to terrorists on the social media platform.

Charged with pushing officer: Independent MPP Randy Hillier says he only greets with “love and affection” 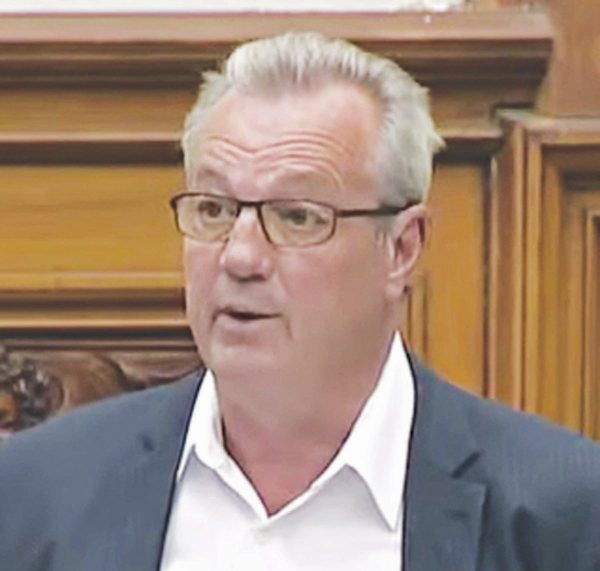 “I look forward to the opportunity to defend myself against these charges,” said Hiller in a March 28 press release. “Questioning and challenging public policy is the role and responsibility of any elected representative. Non-violent civil disobedience has been a globally accepted means of expressing grievance against governments, until 2022 in Prime Minister Justin Trudeau’s Canada.”

During a March 28 court appearance, Crown counsel Tim Wightman said Hillier, Maxime Bernier, and a group of supporters attempted to access parliament Hill by throwing a metal gate out of the way on Jan. 29. A Parliamentary Protective Service Officer tried to stop them but Hillier used his shoulder and hip to push the officer away, Wightman told the court.

Hillier said he does not know what led to his assault charge, as he “only ever greeted people with love and affection.”
One online video shows what appears to be Hillier backing up and a police officer backing up and bumping into each other.

Justice of the Peace Louise Logue consented to Hillier’s release and prohibited him from posting on social media about the Freedom Convoy, COVID-19 vaccine, mask mandates and the anti-vaccine cause.

Hillier’s next court date is May 4.