Farmers support truckers with no regrets 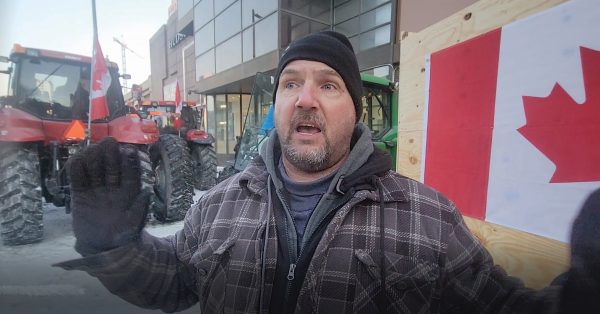 Crop farmer Marty Renaud, who participated in Ottawa and Cornwall convoys, said 95 per cent of people he talked to were supportive of the protests.

EASTERN ONTARIO — The Truckers’ Freedom Convoy is rapidly retreating into history’s rearview mirror. But for the Eastern Ontario farmers that took part, there are achievements to reflect upon and fond memories of a time that won’t soon be forgotten.

No one expects the political class to ever acknowledge the easing of provincial COVID mandates had anything to do with the convoy’s 3-week Ottawa protest — an event one caller to a local radio show described as “truckerlude.” Farmers who recently spoke with Farmers Forum nonetheless say the convoy achieved some of its aims and still say protesting was the right thing to do.

The provinces have been ditching vax passes, employment mandates and other pandemic measures, even as the Trudeau government has held firm on federal mandates, such as the key vaccine requirement for cross-border truckers that sparked the protest.

While expressing disappointment at the lack of change federally, “we made some progress in terms of lifting of mandates” provincially, Thomas Kirchmeier said. The St. Isidore dairy farmer was part of an Eastern Ontario farm tractorcade into Ottawa one weekend in February as a show of solidarity with the truckers. Some of the same farm machines also made their presence felt the following Saturday as they slowed traffic at the international bridge in Cornwall.

He’s not sure if the movement has anything left to do at this point. The end of the ad hoc festivities in downtown Ottawa “left a real vacuum afterward,” Kirchmeier observed on a personal level. “It was always a party, it was always a good time,” the farmer said, adding he always felt good after attending the scene, now just a memory.

Though he expressed some sympathy for downtown Ottawa residents, he pointed out that “at the end of the day, it’s the capital city, and once in a while you have to put up with protests.”

It was the prime minister’s refusal to meet with protesters that ensured the event “went wrong from the get-go,” he asserted. Trudeau, Kirchmeier added, hurt his international reputation with that stance and only made it worse when he invoked the Emergencies Act to clear out the truckers by force.

The protest “might have pushed” the removal of provincial mandates “a bit further and faster,” said Iroquois-area cash-cropper Marcel Smellink, who suggested the movement was now in a holding pattern.

“My biggest concern is, if there’s another variant, will they lock us back up again?” Smellink said, also describing his support for the convoy as nothing but positive and a “great experience…. It was a big tailgate party. I was proud to be a small part of it.”

Not everyone will agree, Smellink acknowledged, but he’s OK with that. “I can only do what’s right in my heart,” said the Dutch immigrant, who explained that he knows the value of freedom after growing up immersed in family stories about life in occupied Holland during the Second World War.

“It was about freedom, and freedom for my kids and grandkids,” Brian Haass, a Peterborough-area trucker and farmer, said. The protest, he added, “needed to happen.”

Haass said he had as many as four transports in Ottawa during the protest, with two staying the whole time. “Not even for a second” did he have regrets about taking part, he said.

Thousands of people shook his hand amid the “happiness and patriotism” during the convoy’s stay in the city, he said. Those wishing him well included Poles and Ukrainians who had lived under communism, he added.

“There was zero graffiti, no broken windows, no fights,” Haass said, adding he never locked his trucks, either. “I could have left my wallet on the fender and nobody would have taken it.”

Cash-cropper Marty Renaud, of Green Valley, said the protest showed the government that “people were getting really upset” as the mandates dragged on. Ontario Premier Doug Ford, in particular, could see “it wasn’t just the 10% unvaccinated” population upset enough with COVID restrictions to physically protest, Renaud said.

He noted the convoy started to lose public support as the provinces started to ease their mandates. He doesn’t expect to ever see a protest of such magnitude again.

“It was good, and I don’t regret it,” said Renaud, whose farm tractor appeared in both Ottawa and Cornwall. “Ninety-five per cent of the people I talk to say it was good what we did.”