BREAKING NEWS
05:27
Home News How a 22-year-old started a beef farm: Working up to 120 hours per week, no bank loans, and a lot of planning

How a 22-year-old started a beef farm: Working up to 120 hours per week, no bank loans, and a lot of planning 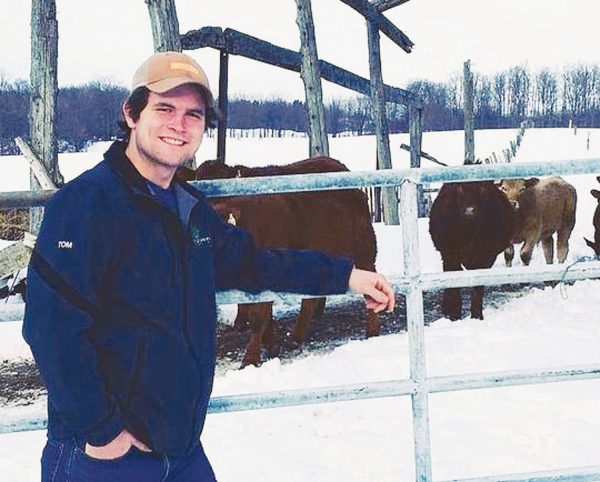 It’s difficult to start a farm with no agricultural background, and no bank loans, but Tom Aikins has done just that.
At the age of 19 he raised 20 cows on rented land. Today, at 21, his operation includes 50 cows, 25 calves, and 400 acres.

RAVENNA— At age 22, Grey County’s Tom Aikins is running his own beef operation. And he started it himself without a single bank loan.

Neither of Aikins’ parents farmed, but he says he had a keen interest in agriculture after spending time on his cousins’ farm. When a nearby dairy farmer needed help with chores, Aikins jumped at the chance for some real experience. He quickly learned how to set up pens, feed cows, care for calves, change milkers, and wash the milk line.

Chores soon turned into a full-time position. Aikins also took a job on a beef and cash crop operation, working both jobs. He says he barely spent a penny on himself, worked as many hours as he could manage, and put away nearly all the money he earned.

“Out of high school, I bought a pickup truck, worked, and didn’t spend money on stupid stuff,” he said.

Aikins received news of an 84-year-old farmer in the area who was having a hard time managing his operation due to poor health. Aikins approached the farmer and worked out a lease with the help of a mentor. At age 19, he got his first farm.

“I was nervous to ask people if they wanted to rent to me and you can’t have that mindset,” Aikins said. “There’s opportunities out there, you need to be flexible in what you’re willing to do.”

The farm was in bad condition and Aikins took to fixing it up, adding an electric fence and a new barn. He raised 20 cows on the rented land while continuing to work full-time at another farm and hauling hay mornings, evenings, and weekends to stay afloat.

He acquired a “very minimal” family loan from his parents and financed the farm almost entirely on his own savings. “I’ve never had a loan from a lending institution,” he said.

When a neighbour passed away, he rented that land too. He brought his herd up to 40 and increased his hay production by 200 acres. To manage the increased expenses, Aikins started a local snow removal route in the winters, began custom feeding calves, and grazing and breeding heifers. He would make sure to sell enough calves and hay to be able to pay his rent each fall.

“You’ve got to have a good handle on your finances,” he said. “I try to pay cash for everything. When I wanted to buy a bailer, I sold enough hay to be able to buy the bailer. I didn’t want to get a bunch of credit and have that hanging over me. That was my strategy.”

After his lease ended, another farm nearby offered Aikins rent their land and he accepted. He says he hasn’t saved up enough money to purchase his own farm yet, but will continue to rent and invest until he can.

“Keep a tally on your assets and reflect on it year-over-year,” Aikins said. “It makes you realize what you’ve built. When it’s all spread out over the farm, you don’t see it.”