End the lockdown protests sweep the country, include rural Canada 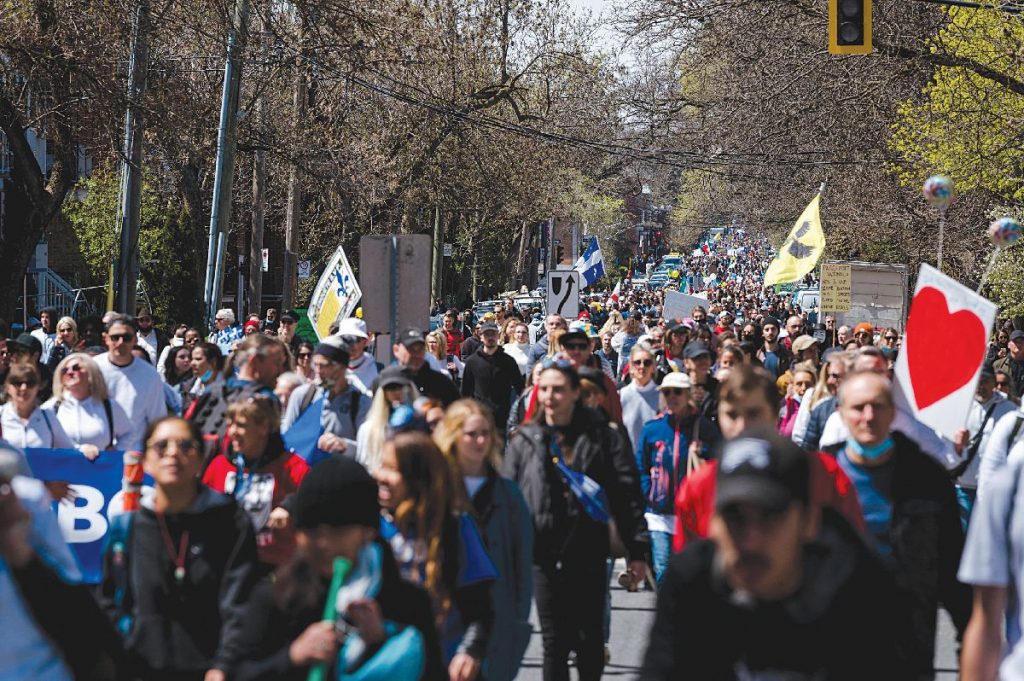 Demonstrators march against new Covid-19 anti-mask and anti-curfew restrictions, in Montreal on May 1, 2021. – The new restrictions issues by the Canadian the government include the mandatory wearing of masks when gathering outside; a mandatory 20h00 curfew, which will moved to 21h30, on May 3, 2021; and restrictions on gatherings. (Photo by Andrej Ivanov / AFP) (Photo by ANDREJ IVANOV/AFP via Getty Images)

CHATHAM — COVID lockdown fatigue is taking root in rural Ontario and across Canada as anti-lockdown protests and marches are being held to rail against pandemic restrictions and the resulting economic damage. In communities not otherwise known as hotbeds of protest and discontent, the “No More Lockdowns Canada” slogan has been carried on placards and posted on the occasional front yard.

In Chatham last month, a 43-year-old woman was charged in connection with organizing two anti-lockdown protests that respectively drew 30 and 50 people on Saturday, April 17 and Sunday, April 18. She’s accused of failing to comply with the Reopening Ontario Act and is due in court May 26.

Provincial police laid several charges April 24 at an anti-lockdown protest at Midland’s harbourfront. Seven individuals were charged for failing to comply with an order made during a declared emergency, OPP said.
Rallies were also held that day in Stratford and Waterloo. An April 9 demonstration in Barrie attracted 300 people and the organizer was fined $300.

Smaller protests were held across Eastern Ontario, including at Cornwall, Embrun, Russell, Alexandria, Belleville, Coburg and Peterborough. There have been recurring small protests on Ottawa’s Parliament Hill. Thousands of people have been showing up at marches in large cities, including Toronto and Calgary. But by far the largest marches are in Montreal.

More than 30,000 people marched in Montreal on May 1. More protests flared up the same day, including at a Church of God service in Aylmer, in Elgin County. Two off-duty Toronto police officers were charged for attending the gathering at the Mennonite church where congregants were alleged to have eschewed masks and physical distancing. 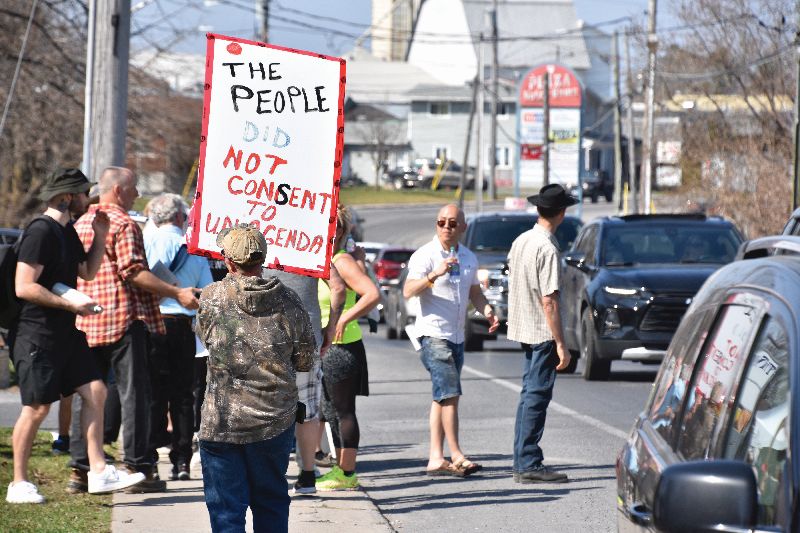 An April protest in Embrun.

St. Catharines saw a May Day demonstration culminating in a gathering at city hall. That same weekend, police handed tickets to 19 golfers who teed up at the Bridges Golf Club in Tillsonburg. The Club flouted the law in defiance of the Ford government, which has closed outdoor recreational amenities to golfers and tennis players in a bid to keep people at home. Ontario is the only jurisdiction in North America that closed golf courses.

Health Minister Christine Elliott justified such closures as a means of simply “limiting the mobility” of the public. (She offered no timeline on when those facilities might reopen.)

The same strategy blew up on the Ford government after declaring park play structures off limits to children last month, drawing the fury of parents whose reaction caused a tearful Doug Ford to back down. The ongoing provincial ban continued on outdoor sports last month. However, the Ontario Soccer organization has since gone on the offensive, pleading with the government to allow children to get back to the fields for their mental health. The soccer association argued on behalf of its 500,000 participants that “this social and physical neglect of our children and youth must stop.”

Only three people in Ontario under the age of 20 have died from COVID-19.

Saturday, May 15 has been marked as a global day of protest for the anti-lockdown movement. It can’t come soon enough for seed sales rep. Vince Trudell, of Melbourne, who has taken part in several protests. Farmers are upset and frustrated,” he said. “Everything is bull—-.”

Trudell says his farmer clientele are always quick with a handshake. “There aren’t very many farmers who will not shake my hand,” he said. “These farmers don’t like to wait outside the hardware store to buy a couple of screws.”
Political and medical authorities are quick to condemn anti-lockdown protests. With the country battling a third wave of COVID-19 cases — pressuring hospital ICU’s to a degree not previously seen — policymakers are also hearing loud calls for more restrictions, not less.

For their part, anti-lockdown proponents argue that people need to take precautions, wear a mask when necessary to protect the vulnerable, but shutting down outdoor events and crushing jobs, youth sports, schools and restricting freedom of movement and religion is overkill.