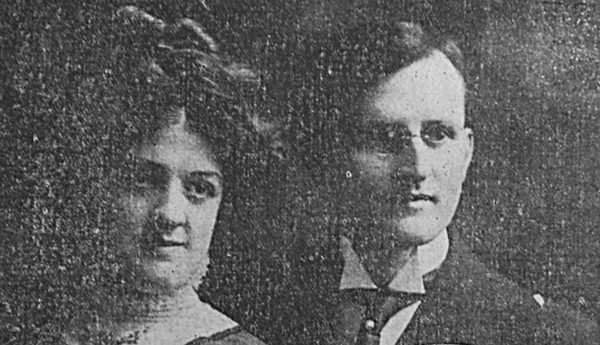 Hudson Allison and his wife Bess and daughter perished in the Titanic disaster. The Allisons purchased a Chesterville farm, now owned by the Vanden Bosch family.

Betty Vanden Bosch has never been able to watch that last Titanic blockbuster movie, complete with its highly realistic portrayal of the maritime tragedy that shocked the world 110 years ago this month. The story hits just a little too close to home.

The matriarch of the Vanden Bosch Elevators farm family happens to live in the country home built by one of the most famous Titanic victims, Hudson Allison, wealthy banker and gentleman farmer.

Though a resident of toney Westmount, Quebec, Hudson Allison was, in early 1912, putting the finishing touches on a fine new farmhouse on the rural property he acquired on the outskirts of his Eastern Ontario hometown of Chesterville, just a few miles from where he was born in old Winchester Township.

The 30-year-old financier and his 25-year-old wife, Bess, along with their two young children, travelled to England partly on a mission to buy cattle for the new farm. Fatefully, the Allisons returned to North America aboard the maiden voyage of the Titanic. Only their 11-month-old son, Trevor, survived. The family nursemaid, with baby Trevor in her arms, was separated from his parents during the confusion. They found a place in a lifeboat after the reputed “unsinkable” ship struck an iceberg off the coast of Newfoundland late on April 14, 1912.

The Allisons were among the more than 1,500 people (out of 2,200 passengers and crew) who perished when the White Star luxury liner sank into the icy Atlantic waters. Especially tragic, Bess and 2-year-old daughter Helen Loraine had been ushered onto a lifeboat — it was women and children first, of course — but the young mother desperately insisted on getting back onto the foundering big ship with her daughter to find her “missing” baby. (That tragic scene, which surviving passengers recounted to the media, has been restaged in at least one of the several Titanic films produced over the years, as well as in a 1990s miniseries about the Allisons.)

Meanwhile, Hudson’s newly purchased Frisian Holstein cattle, as well as a number of horses, arrived from overseas at the Winchester train station, a few weeks after the family funeral service at Chesterville’s local Methodist church. The shipping arrangements had gone ahead, to the surprise of Hudson’s surviving extended family members. “They didn’t know the animals were coming,” says Vanden Bosch, who has extensively researched the Allison story. “They drove the cattle (on foot) from Winchester to Chesterville,” she adds. It’s a spectacle Vanden Bosch says she can envision, all of those animals entering what is now her driveway off County Rd. 7, more than a century ago. The thought triggers her own memories as a youth, chasing her parents’ dairy cattle two miles to a new pasture each summer outside Lanark.

The Allison farm ran as an estate for about 10 years after the tragedy, with Hudson’s brother, sister-in-law and mother living there. The operation was “a real show place,” complete with electricity in the new barn, cork-lined stalls, a tile-drainage machine to improve the land, and top-quality cattle and teams of horses, Vanden Bosch says.

Elements of that grandeur remained when she and her late husband, Stan Vanden Bosch, bought the place in 1965 and established an Ayrshire dairy herd, before switching to crop farming exclusively in the late 1970s. The property had been long sold out of the Allison family when they purchased it. The big brick house — which wouldn’t look out of place in Westmount — was easily expansive enough to accommodate the Vanden Bosches’ growing family of four children on the second floor while Stan’s parents lived on the first.

The original barn was partly destroyed by a tornado that ripped through Chesterville in 1972 but some remnants of that structure still stand at Vanden Bosch Elevators.

Betty says she only became aware of the Titanic connection to her home in the late 1970s. Her interest was further piqued when submariners finally found the sunken vessel on the ocean floor in 1985. Local kin of the Allisons have also assisted in her knowledge over the years. Along the way, she’s amassed a collection of Titanic and Allison family memorabilia, and visited local schools to tell an important local story. The tragedy of it all can still grip her in an emotional way, she says.

The longtime Rotarian hopes to display her collection — including vintage clothing, replica Titanic dishes, four-foot Titanic model and Allison photos — when Chesterville celebrates its annual Art on the Waterfront event, June 4-5. The display is tentatively set for the village’s United Church, site of the Allisons’ funeral service in 1912.

Beef prices set for a surge that could last years, experts say