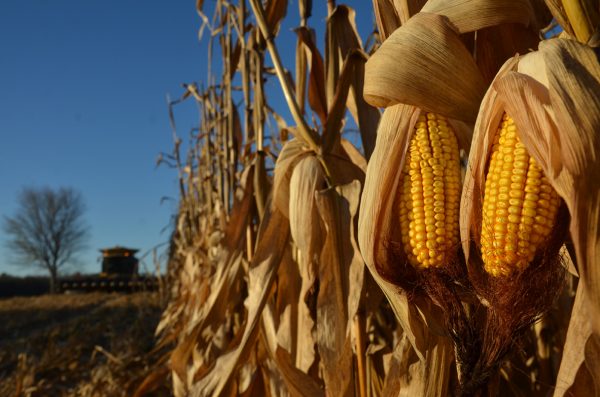 COBDEN — Long, sunny summer days that spilled into fall added up to 30 to 40 more bushels per acre than usual of Grade 2 corn for Bruce Hamilton.
“We have our worst field done and it didn’t drag us down any,” says the Cobden crop, dairy and beef farmer, who was combining 200-bu/ac corn that had as much as 200 extra heat units and dried down well before the first frost. “The corn got to maturity on its own this year without Mother Nature pushing it. We’ve only got one person to thank for that and that’s the Lord.”
Timely rains and September heat also had Avonmore crop and dairy farmer Glen Canham’s expectations flying high. He still had 400 acres to go on Oct. 23, but the yield monitor had been hitting the 200-bushel mark.
“I hope for a record crop on our farm. There is no reason to be upset about the crop this year,” he says.
With the exception of some fields close to the Quebec border north of Lancaster, 200 bu/ac seems to be the norm across Eastern Ontario. Average yields may end up close to 10 bushels above the long-term average, says independent agronomist Gilles Quesnel, adding that most corn will make Grade 2.
Corn hit by mid-May frost took its time recovering and the tile runs were glaring after a rainy June, but heat and moisture during pollination and grain fill were ideal, leaving cobs with an extra two rows of larger, longer kernels, says Quesnel.
“Farmers could see the potential in September but once we started harvest, many were getting as much as 10 bushels above expectations,” he says.
There’s still a lot of corn in the field — harvest was about halfway done by Oct. 28 — but big yields, more acreage, and with soybeans and cereals already taking up elevator space, farmers may be in a pinch to find storage. “It’s likely to be a bit of a headache. There may be some corn stored temporarily on cement pads until it can be moved,” says Quesnel.
Napanee crop farmer Andrew Hough’s yields were more spotty but still a little above average, ranging from 150 to 190 bu/ac so far.
May frost and dryness followed by a deluge of rain in June may have pulled down yields and impacted cob size consistency, he says. But there are still good-looking fields yet to combine, which may have got a yield boost from biosolids and a cover crop, says Hough.
“I’m optimistic. There is quite a bit of harvest to go, so we’ll just have to wait and see.”