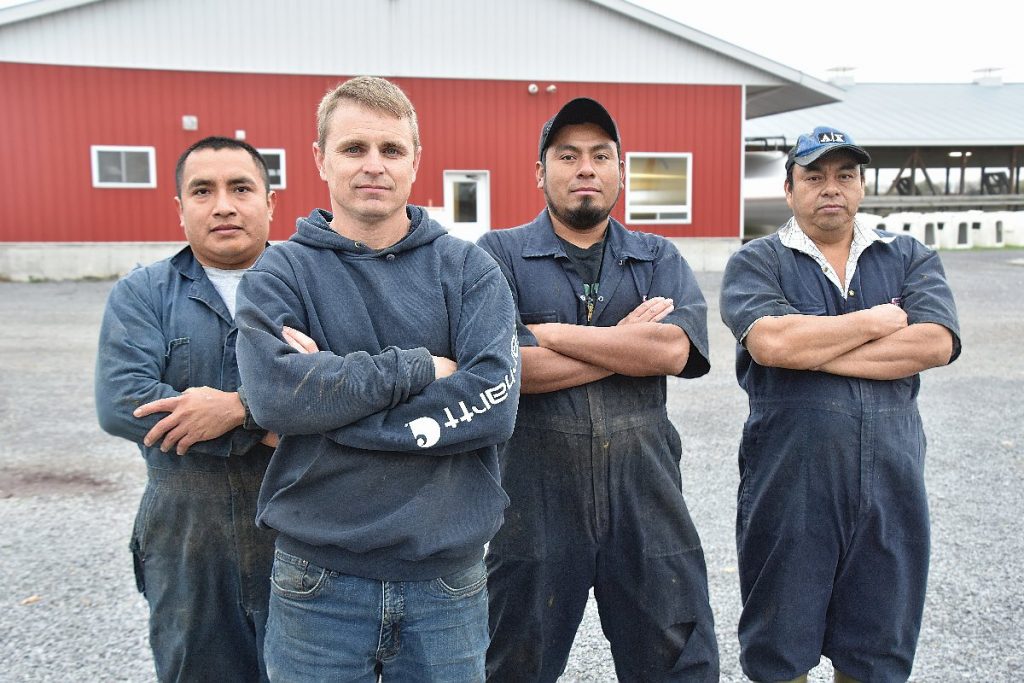 Osgoode dairy farmer Todd Nixon solved his labour problems when he hired Guatemalans to milk the cows. Behind him are Avelardo Ical-Pop, Oscar Lopez-Cruz and Felix Lopez-Cruz. (Nelson Zandbergen photo)

Morrisburg crop farmer Arden Schneckenburger is among the 4 out of 10 farmers not able to find the workers they need, according to a recent Canadian Federation of Agriculture (CFA) survey.

“Pre-COVID was far better,” said Schneckenburger, who is looking for a full-time worker. His family farm relies more on trucking contractors today as their own trucks sometimes sit idle for lack of drivers. Two part-time drivers handle about 55 % of the farm’s transportation requirements. “We would’ve had one or two full-timers on staff, moving fertilizer, hauling crops.”

Some jobs don’t get done. While the farm managed to hire one employee in the spring there was no luck landing summer students to mow lawns and whipper-snip around buildings and such. “Not a single one applied,” he said.
Larger operations are having a terrible time finding workers. St. Albert Cheese factory, a farmer co-op, wants to expand operations but has cut production as they are searching for 25 to 40 workers to fill immediate job vacancies.

Some farmers solved their problems by hiring foreign workers for the summer months or even year-round. No longer the sole domain of orchards and vegetable growers, employing foreign workers is a strategy supported by the Canadian Federation of Agriculture as a way of relieving on-farm pressures.

Osgoode area dairy farmer Todd Nixon hired six Guatemalans through the Temporary Foreign Worker program for barn chores and the milking parlour. He took the plunge one year before COVID. At any given time, three full-time employees from Guatemala are on the farm. They worked straight through the pandemic. When one of the workers goes home, another Guatemalan arrives. 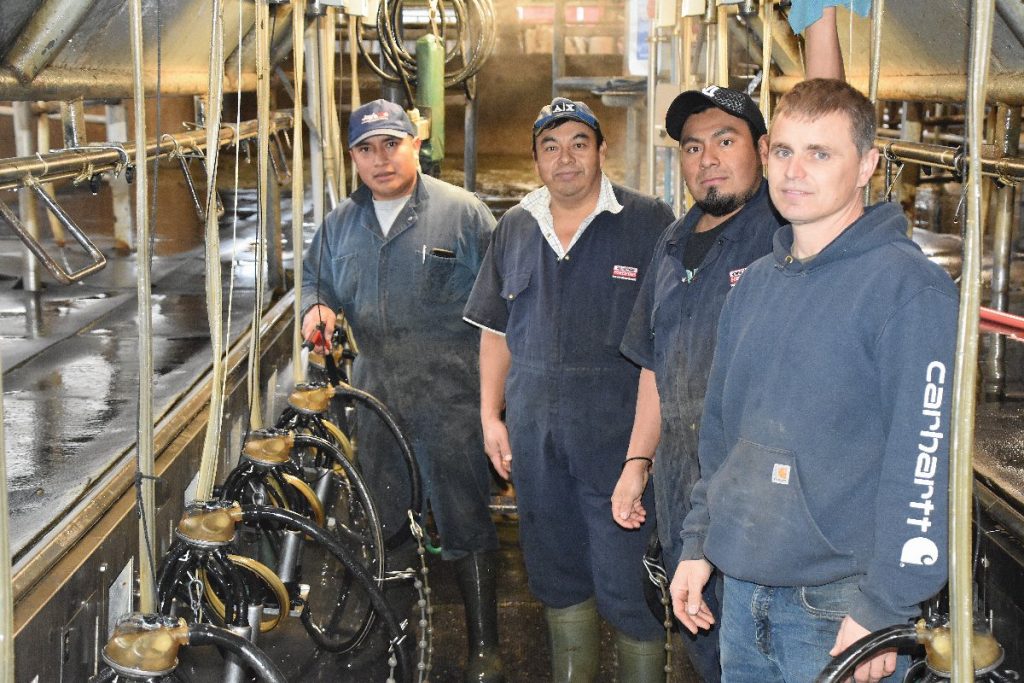 Hosting the Guatemalans “has been a huge improvement for us,” Nixon said. “They haven’t missed a shift, switched a shift, been late for a shift, since they started. Which is way different from when we were running a lot of students before.”

Nixon said the Guatemalans are taking English lessons and he knows of four or five other dairy farms in the region now employing workers from Guatemala.

So vital are such workers to fill a growing gap on Ontario farms, the CFA is calling for clear rules and government support for farmers to access the foreign worker program, along with potential permanent residency for those employees. The number of unfilled positions in Ontario agriculture is expected to reach 123,000 by 2029, up from 63,000 in 2018, according to the CFA.

Other farmers are lucky enough to have family help or find someone local. A local worker proved to be the solution at Dave McDiarmid’s Winchester area dairy farm. He found a mature neighbour just before the pandemic to milk the cows full-time. She grew up on a dairy farm and lives nearby. “Somebody like her is very hard to find,” he observed. “All she has ever done is milk cows, and it’s not too far of a drive for her.”

She works two to three hours per milking, in the morning and again in the evening. The routine work includes feeding the cattle and calves. “We’re happy with the arrangement and I think she is as well,” he said.

In Glengarry County’s Williamstown area, cash cropper Duncan Ferguson said he was “really lucky to have a couple of really solid part-time employees that have been with us through thick and thin.”

But the Glengarry Federation of Agriculture president acknowledged farmers do face hiring challenges. “There seems to be an unwillingness to work out there,” he said.

Retired workers can sometimes be persuaded to put in a few hours. “Some of my best employees are retired workers,” Ferguson added. “They just want a little bit of extra spending money.”

He counts in that category a newly hired truck driver running only a couple of loads daily to earn enough to work on his car collection this winter. “I’m more than happy to provide that for him.”