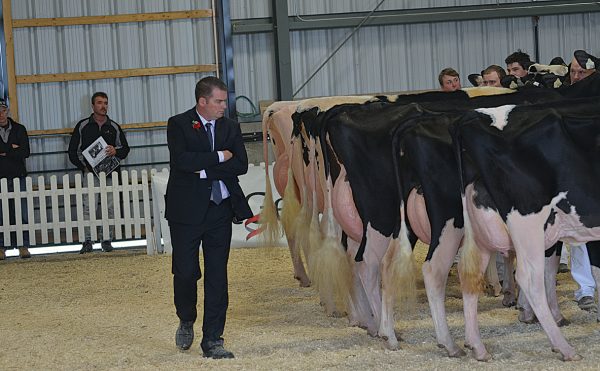 METCALFE — Even as a first-lactation two-year-old that was just nine days fresh, Brian Enright had a hunch that Garay Sid Black Beauty might be something special.

“Every day we could see an improvement in her udder. We have a lot of people come through the barn and they kept telling us this cow was going to come ahead fast. Within 60 days her udder changed. She milked very high as a two-year-old,” says the Winchester dairy farmer, who boarded Black Beauty at his barn this spring, buying her not long after she arrived. She was up to 45 kilograms of milk on her second test.

His instinct paid off: Black Beauty was grand champion at the Eastern Ontario-Western Quebec Championship Show on Oct. 15 in Metcalfe.

But Enright credits his son Matt and his neighbour Gerald Jaquemet — who co-owns the cow with the Enrights and Pembroke-based livestock photographer Vicki Fletcher — for making the call to buy the young cow.

“Gerald is a sharp cow man who understands pedigrees. Matt has a knack for working with a cow and making improvements as she moves through her lactation,” says Enright, who runs Winright Holsteins with his wife, Audrey, Matt, and Matt’s girlfriend, Erica Neville.

Deep-bodied with fine-boned quality in her legs and a good udder, Black Beauty, part of the well-known Barbie cow family, has already classified Very Good and has six Excellent dams backing her up.

She caught the eye of judge Bloyce Thompson almost immediately.

“She was an easy winner. Her future is bright. I have no fear that when she calves out again she’s going to get even better,” says the P.E.I. dairy farmer, who runs Eastside Farms Inc. with his wife, Terri in Frenchfort.

But it’s still rare to see such a young cow come out ahead, says Enright. “We thought we had other cows that would chase the top.”

His pick would have been the reserve champ, Budjon-JK WBRK Enthem, jointly owned by the Enrights and Jaquemet. The senior three-year-old has a great frame and capacity with a high and wide rear udder, but it was her Elegance family roots that piqued their interest when she was just a young calf, says Enright. “She really filled in. She’s 88 points as a second calver.”

Perennial winner Simon Lalande of Ferme Blondin was absent for the second straight year. Cows owned or previously owned by the St-Placide, Que. farm have made the top three 10 years out of the last 13.

“Every single one of his cows had a beautiful udder.”