BILL C-244: Why steal secrets if right-to-repair bill gives them away? 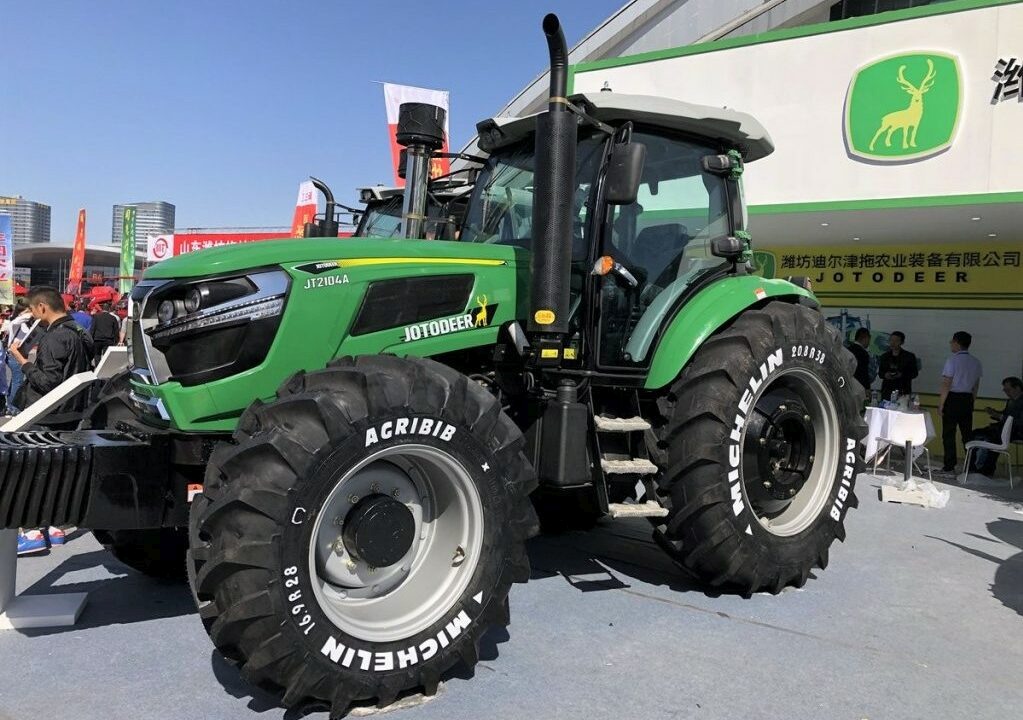 This “JotoDeere” — a John Deere look-alike — was on display at a 2018 trade show in Wuhan, China.

OTTAWA — Farm equipment manufacturers are sounding the alarm over proposed invasive “right to repair” legislation in Canada that will make their proprietary technology easier for China to rip off and malevolent hackers to exploit.

If parliament passes private member’s bill C-244 as is, John Schmeiser, president of the Canadian arm of the North American Equipment Dealers Association, told Farmers Forum that, to protect company secrets, American-based companies might stop including their most advanced technology on farm equipment that comes to Canada.

Schmeiser asserted that farmers already have a right-to-repair in most cases, and argued the bill violates World Trade Organization rules and the Canada-US-Mexico Agreement on Trade. “The worst possible thing for Canadian farmers would be to put us offside with the U.S. or have different rules than the U.S.”

Rookie MP Wilson Miao (LIB-Richmond Centre), who immigrated from Hong Kong and doesn’t have an office open to the public in his Vancouver-area riding, sponsored the bill that requires only one more vote to pass in the House. The bill would loosen the Copyright Act to give consumers access to the information and computer code needed to diagnose, maintain and repair all sorts of appliances by themselves — from refrigerators to computers, as well as farm tractors.

Though he didn’t specifically raise the issue of industrial espionage when he appeared before the Industry and Technology committee last November, Schmeiser confirmed it’s a major part of the overall cybersecurity threat his organization sees in the bill.

“Cybersecurity and the threat of somebody stealing corporate secrets is top of mind, and we just haven’t escalated to that same level of debate in Canada at this point,” Schmeiser said. “But I think the threat is very real… I think the whole industry is at risk of having intellectual property stolen if things like access to software is just thrown wide open.”

As recently as April 2022, a St. Louis court convicted a Chinese national of conspiracy to commit economic espionage and sentenced him to 29 months in jail. The man pleaded guilty to copying a proprietary online farming software algorithm from Monsanto and trying to spirit it away to China.

Meanwhile, a John Deere tractor knock-off — a modern-looking machine complete with green paint and dancing deer logo, but cheekily called a “JotoDeere” — turned up at a 2018 trade show in Wuhan, China.

Canada is no stranger to Chinese subterfuge. The most recent accusations stem from a Global News report that 11 unidentified federal candidates in the Greater Toronto Area alone received election campaign contributions from the Chinese government in 2019. “It’s hard not to connect the dots that some of this might be going on in agriculture as well,” John Schmeiser said. Global News also reported last November that China placed agents in MPs’ offices and led aggressive campaigns against politicians viewed as contrary to its interests.

Beyond China, the bill threatens to increase the cybersecurity threat from plain old criminal hackers and online extortionists. When Russian soldiers stole a number of John Deere tractors after invading Ukraine last February, the Illinois-based manufacturer remotely turned them off, rendering them useless to the Putin regime. Imagine that capability in the hands of malicious hackers “because they’ve got access to the software” via Canada, Schmeiser said, calling that scenario “a threat to Canadian agriculture.”

Farmers already enjoy the right to repair their equipment in 98% of the cases, he told MPs, adding the industry offers all of the specialized tools, diagnostic equipment, service manuals and access to error codes.

Schmeiser also reported that a recently inked memorandum of understanding between John Deere and the largest private farm organization in the U.S. — the American Farm Bureau, equivalent to Canada’s Federation of Agriculture  — demonstrates the industry’s commitment to allowing on-farm repair.

Charles Burton, senior fellow at the Ottawa-based Macdonald-Laurier Institute and former counsellor at the Canadian Embassy, described the bill as “very troubling” as it would mean turning over sensitive or secret company information to users, including “a hostile China” that could adapt the technology for its military program.

“Is this bill in the interest of farming or a pretext for hostile actors to use it against Canadian interests?” Burton asked. “I’m shocked that it could go through.”

The bill’s sponsor, MP Wilson Miao, told Farmers Forum by email that he did not rule out changes to the bill, noting it would undergo clause-by-clause review and debate at committee. There are no farm dealerships in Miao’s riding.