Who’s who at Queen’s Park 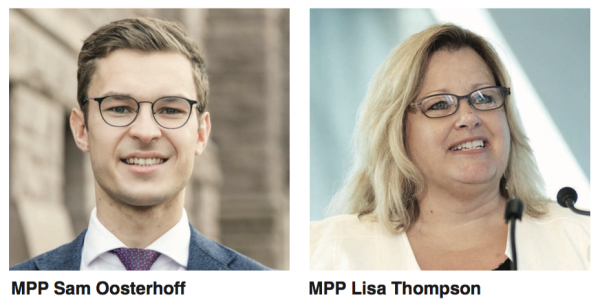 TORONTO — Your Member of Provincial Parliament is back at work. Following the recent June provincial election here are four MPPs worth watching.

In 2016, Oosterhoff became the youngest MPP ever elected in the Ontario legislature. He was 19. He was a breath of fresh air for rural Ontarians with traditional family values. When elected, he had been enrolled as a first-year political science student at Brock University. In one of his more recent jobs, he was a policy analyst in Ottawa. Before politics one of his jobs was shovelling snow. He also grew up on a pork farm at Vineland in the Niagara Region.

Critics howled at his winning, strengthening the argument that the vocal opponents to traditional values are the intolerant ones. In contrast, Oosterhoff shines as a man of conviction and courage.

Oosterhoff correctly points out that Canada has no abortion laws and shares the most extreme posi- tion in the world with China and North Korea.

Lisa Thompson was born in Wingham and now lives near Teeswater with her husband on a farm that has been in his family for well over a century. They cash crop and raise purebred Boer meat goats.

She is a graduate of the University of Guelph.

Before politics called, Thompson was the general manager of the Ontario Dairy Goat Cooperative. She is also past chair of the Ontario 4-H Foundation. The people of Huron-Bruce are solidly in her corner. In this year’s June election she garnered 24,369 votes, tripling her nearest opponent.

John Vanthof was born and raised on a New Liskeard dairy farm. He and his wife ran their own dairy farm in Earlton between 1984 and 2014 before politics.

For 20 years, John served on the Timiskaming Dairy Producer Committee.

In 2004, he was elected for a term on the board of the Dairy Farmers of Ontario. In the riding, John is noted for his 10-year term as president of the Temiskaming Federation of Agriculture. He is also the nephew of former PC Agriculture Minister Ernie Hardeman. Vanthof captured his fourth election win this year with 9,251 votes, outpacing the PC candidate by about 1,600 votes.

Bobbi Ann Brady’s story supports the belief that politics is a blood sport.

For 23 years, Brady was the executive assistant to MPP Toby Barrett. When he announced his retirement, Brady was rejected as a PC candidate, so she ran as an Independent with Barrett’s encouragement. He was her campaign manager. She turned the party rejection into motivation. “I felt after 23 years of being a loyal party soldier, they owed me the chance,” she said. She beat the former Haldimand mayor by more than 2,000 votes.

She grew up on the family tobacco farm and is a gold med- alist kickboxing champion who turned her focus to karate. “It’s outside my comfort zone and a great way to release pent up frustration and stress,” she said.