Who’s the farm boy that won emerging artist at Boots and Hearts? 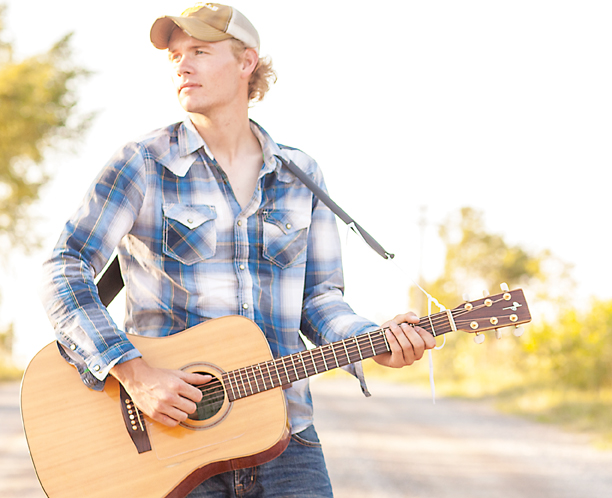 “Especially on the tractor, sitting there for 10 hours and you’re starting to get a little bit bored,” said Barker. “You see something around that strikes a chord, and you start building a song idea, and you write and re-write in your head and sing it out loud. When you get a tractor stuck, you can either get pissed off or use it as inspiration for a song.”

In August, Barker, 23, son of Kevin Barker of Kevin Barker Auctions at Woodville, west of Lindsay, won the Boots and Hearts Emerging Artist Showcase, a contest to find Canada’s next big country star. More than 12,000 of 52,000 votes were cast for Barker, who sang the song he wrote, Calling Me Home, on the main stage at the Boots and Hearts festival, one of Canada’s largest country music festivals, held in early August north of Barrie. Universal Music Canada will soon release one of his singles and he will spend a week in Nashville for a professional photoshoot and media training.

Farm chores helped him learn what it takes to be successful in music.

“Just keep working,” he said. “That’s the main thing you learn from being on a farm. When you’re picking rocks for two weeks straight, there’s no such thing as quitting. It’s got to get done, and somebody’s got to do it. It’s the same with the music career. You just keep playing. You play a chicken restaurant 150 times where there’s 10 people there, but you keep going back and keep playing and keep plugging along. You just keep working until you get a break.”

Barker started his musical journey at age four by playing fiddle. He switched to guitar when he was 12 and started playing fill-in for guitar players in bar bands at ages 16 and 17. Around that time, he had his first-ever gig, playing at a local cattlemen’s association.

When he turned 18, he was in Nashville chasing the dream to become a full-time musician. His inspirations are George Strait, Hank Williams, Alan Jackson, and Eric Church.

The farming culture has also helped Barker write with authenticity. He says a lot of songwriters who write country music actually grew up in the city and don’t know what a fencerow is, or the difference between a John Deere and a Case IH.

“I don’t think I would be where I am today with my music career if I hadn’t had that upbringing.”