What you learned is wrong. Soybeans need nitrogen, researcher says

ONTARIO — American growers are losing soybean yield potential due to inadequate management of the crop — and it starts with the mistaken belief that soybeans need less fertilizer than is actually the case.

Ontario growers would do well to avoid the same pitfall. That was the implicit advice of Dr. Fred Below — at the University of Illinois’ department of crop sciences — as he outlined the secrets of soybean success during the annual Ontario Agricultural Conference in January. 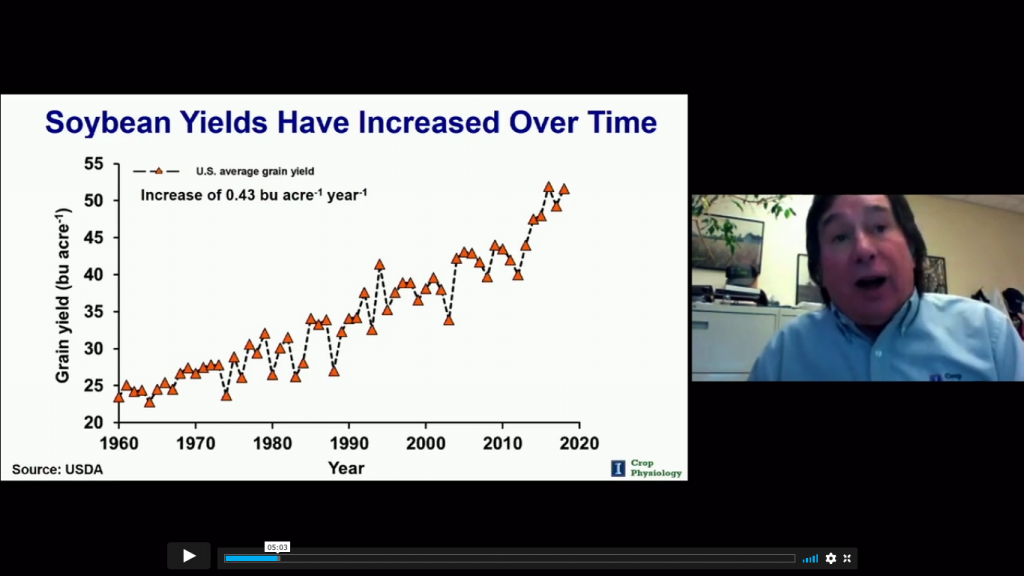 Dr. Below presents data showing the increase in American soybean yield over the last 60 years.

Key among his points delivered online: Realize that soybeans — despite being a nitrogen-fixing plant — draw more N out of the soil than they put back in. Those root nodules, where bacteria make nitrogen in a symbiotic relationship with the soybean plant, only satisfy half of the crop’s nitrogen requirement of four to five pounds for each bushel of beans produced.

Below pointed to research showing a 60 bu/ac soybean crop removes 56 pounds of nitrogen, per acre, from the soil. “Soybean does not add nitrogen to the soil,” he reiterated.

He added, “If I teach you anything here today, it’s that soybean removes more nitrogen than it fixes, and it has to do with the fact that soybean has a very high nitrogen requirement, and it only gets about half of its nitrogen from the nodules. I know I learned in school that for every bushel of soybeans, you got a pound of N. It’s actually exactly the opposite.

That extra nitrogen must come from added fertilizer, and Below showed research indicating that Ammonium Nitrate broadcast at pre-planting — somewhat surprisingly — yielded the best result.

Below described soil fertility — including the need for appropriate levels of Potassium, Phosphorus and Sulfur — as “one of the most overlooked factors for managing soybean yields.”