What are the odds? A South Mountain peach tree bears fruit 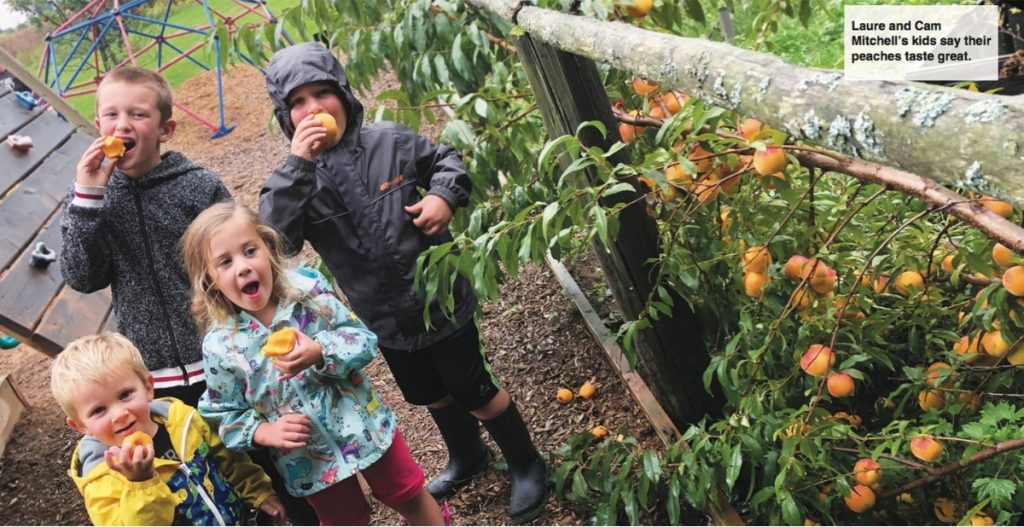 SOUTH MOUNTAIN — Call it the little peach tree that could.

It had no business sprouting out of a peach pit in the old compost pile that practically lay beneath a cedar hedge at Laure and Cam Mitchell’s Eastern Ontario home about 40 km south of Ottawa — and well north of Niagara’s peach groves.

Over the ensuing decade or so, the unassuming sapling crept out from the tangled darkness, stooped parallel to the ground, emerging laterally like a weed
beside the playground equipment enjoyed by the couple’s four children.

Nobody noticed when the bent-over tree with strange leaves flowered this spring. Cam says they were away camping and paid little attention to the sapling — until they noticed it laden with fruit for the first time. Its branches were splayed on the ground and bejewelled with yellow peaches that took on a reddish hue as they ripened near the beginning of October.

Both teachers, the couple say their debut crop yielded about half a bushel or more. Laure says her mother collected much of the unexpected bounty, turning the fruit into peach jelly.

Other friends have also dropped by for samples, eager to plant the seeds in their own back yards after Laure relayed the story on social media.

Only smaller examples were left on the tree when Farmers Forum paid a visit in early October.

The flesh is brighter orange than Niagara peaches at the grocery store, and the pit clings within (not ‘free-stone’ as peach a cionados might say). It’s sweet but not as sweet as a store-bought peach (based on the writer’s palate). Laure describes their texture as “buttery.”

OMAFRA fruit tree specialist Kathryn Carter reported that peach trees can indeed grow in Eastern Ontario, “but it is unusual for them to have a long life span as they are prone to winter injury due to the cold temperatures” here. “The other challenge is that Eastern Ontario is further away from the lake, so that area is more prone to frosts which would also reduce peach yields,” she said by email.

“This winter was relatively mild though, and we didn’t have any significant negative impact from frosts, so that might have helped your peach tree survive and produce well this year. Having said that, it would be interesting to see how it fares over a 5- or 10-year period.”