BREAKING NEWS
18:07
Home News WESTERN ONTARIO: Double-crop in a year that could

WESTERN ONTARIO: Double-crop in a year that could

WINGHAM — Some producers did manage to pull off “double-cropped” soybeans this fall — though, as usual, the feat remained rare during a year that otherwise saw increased interest as spring got off to an early start.

Conditions were such that winter wheat was fertilized early, matured quickly and beckoned for an early harvest in mid-summer. But conditions didn’t work out perfectly from there to accommodate a soybean follow-up. Rain often delayed the wheat harvest and with it, the prospect of planting beans on the back end.

For those growers who did get those soybeans in the ground, the moisture spurred the seed to sprout and emerge. Warmth and mild conditions lasted through fall — with no killing frost until at least late October — allowing the combines to head out for a second time on those same fields this season.

“I’ve heard of some terrific yields in the 40s and even in the 50s (bu/ac),” said Horst Bohner, Stratford-based soybean specialist with the Ontario Ministry of Agriculture, Food and Rural Affairs. 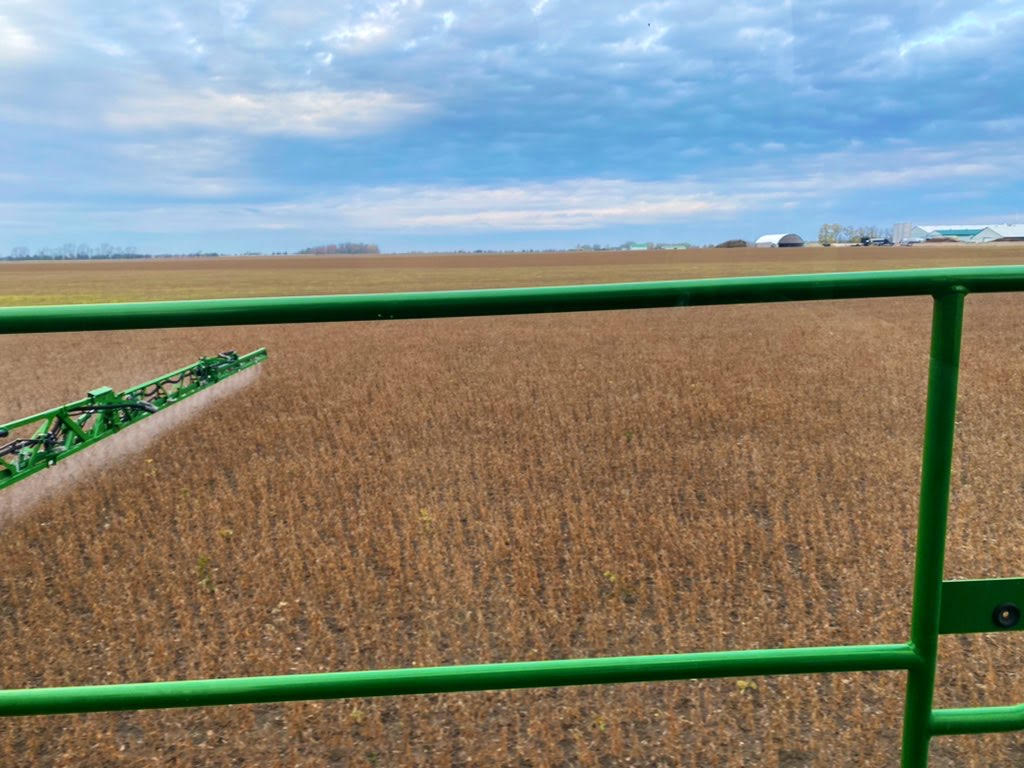 Spraying for volunteer wheat in Mark McLean’s soybean crop planted after this year’s winter wheat harvest in the summer.

“But at the end of the day, were there a lot of double-cropped soybean acres? Absolutely not,” added Bohner. He estimated that not even one percent of Ontario’s soybean acres in 2021 followed the harvest of some other crop, principally winter wheat — although other cereals as well as peas and dry beans can also serve as the precursor.

“It’s a risky business, for sure, but some guys have gotten pretty good at it.”

The attempt panned out for Kitchener-area cash-cropper and chicken farmer Mark McLean, who reported a soybean yield of 33.1 bu/ac on 125 acres of land on which he first grew a crop of winter wheat in 2021. The achievement was a first for McLean, who crops a combined total of 4,500 corn, soybean and wheat acres. The July 18 bean planting was a “hail Mary pass,” McLean quipped, adding he was prepared to plant up to 500 acres if only he could have gotten the seed in the ground by July 10.

Rebecca Miller, a partner in Edgar’s Feed & Seed in Wingham, said she didn’t have “a ton” of clients trying to double-crop this season. Mother Nature provided a few challenges but “the growers who did do it were successful at it,” she said, describing yields as decent. “They were happy.
“Will they do it again, every year? Definitely not,” Miller added. “Is it more economical when the price of beans is at $15, for sure it is. And a lot of guys were more enticed to give it a try because beans were at that all-time high.”

In her area, she said, very dry conditions at the time of the winter wheat harvest dissuaded some from following up with soybeans, fearing that germination would be poor. But then rain arrived to justify the move for those who took the risk. “The people that planted them got in that sweet spot. I had one guy, he went after winter barley [harvested even earlier] and he really hit that sweet spot.”

London area cash-cropper Bob Kroesbergen said he’s tried planting soybeans after the wheat harvest three times in the past half decade, and so far it’s worked out on the 100-acre spread, including this year. “They did OK,” he said, estimating his yield at 25 bu/ac, similar to his previous attempts. His double-cropped soybeans were planted in mid-July — about a week and a half after the wheat came off, a delay caused by rain.

“Quality was great, and the moisture was about 15%” at time of harvest near the end of October, he reported.

The spring’s early start and the late killing frost even allowed a few Eastern Ontario producers to get in on the double-cropped soybean action this year.

“It’s extraordinarily unusual,” said Warren Schneckenburger of Morrisburg, adding a “pretty unique set of environmental circumstances” led to a similar double harvest on eight acres of soybeans he planted “for fun” after wheat on July 10.