Who knew corn yields could ever exceed 600 bushels per acre? David Hula of Charles City, Virginia has done it not once, but twice. And he’s the only one who’s ever done it.

In the 57th year of the National Corn Growers Association’s National Corn Yield Contest, Hula produced the greatest yield, hitting 602.1694 bu/ac. He won with a no-till, irrigated field of Pioneer’s P1222YHR. The winning yield must be calculated over a minimum of 10 continuous acres. 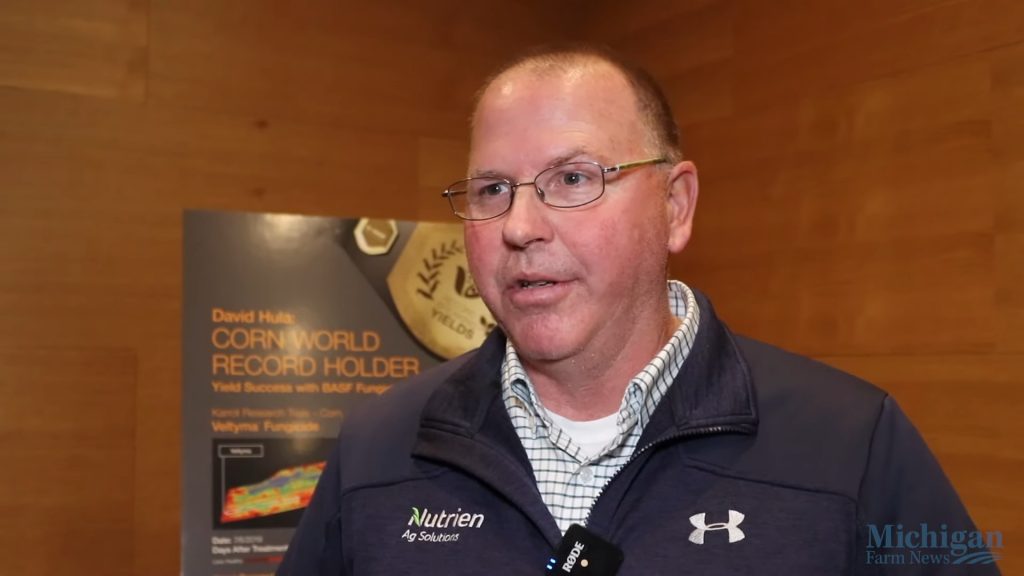 David Hula is interviewed by the Michigan Farm Bureau’s news organization on YouTube in February 2020.

But his efforts are hardly sound business decisions. He spends a lot of time and money for bragging rights to a world record.
Back in 2019, Hula had won the same competition with 616.195 bu/ac, already setting his fourth world record in corn yield. Hula told Progressive Farmer that his 2019 plot cost him $1,700 per acre and said it would be profitable anywhere above U.S. $2.75 corn. At U.S. $4 a bushel, this year’s winning 602 bu/ac corn would gross U.S. $2,408 per acre. But growing it takes more time and effort than anything.

Hula uses Precision Planting’s Conceal, a fertilizer placement device that adds nutrients in a double band three inches away from the seed row. He samples every acre of his soil and adds lime if necessary to correct the pH.

Hula uses the SoilWarrior Strip-Till Rig to apply sulfur, phosphorus, nitrogen, monoammonium, and micronutrients in bands prior to planting. He meets with Pioneer representatives to choose corn hybrids, basing his decision first and foremost on yield potential, then early flowering for a longer grain-fill period.

Hula told Successful Farming that careful planting is key. Hula uses DeltaForce, an automated downforce control system which helps with maximizing yield. He plants at 5 to 6 kph and checks his rows every-other time he refills his planter.

Hula samples the corn leaf tissues often and has created his own dataset to know exactly when to apply nutrients throughout the season. He uses a Y-Drop Sidedress to extend nitrogen application and applies boron, nitrogen, potash, sulfur, and micronutrients with foliar sprays. He also uses fertigation and fungicides.

The second highest yield in the contest was accomplished by none other than Hula’s son, Craig Hula, with 583.07 bu/ac in the same category and with the same variety. Don Stall of Charlotte, Michigan had the third-highest yield, scoring 465.7725 bu/ac on a conventional irrigated field of Pioneer’s P0720AM.

The winners will be celebrated at the Commodity Classic in March, 2022, in New Orleans, Louisiana.