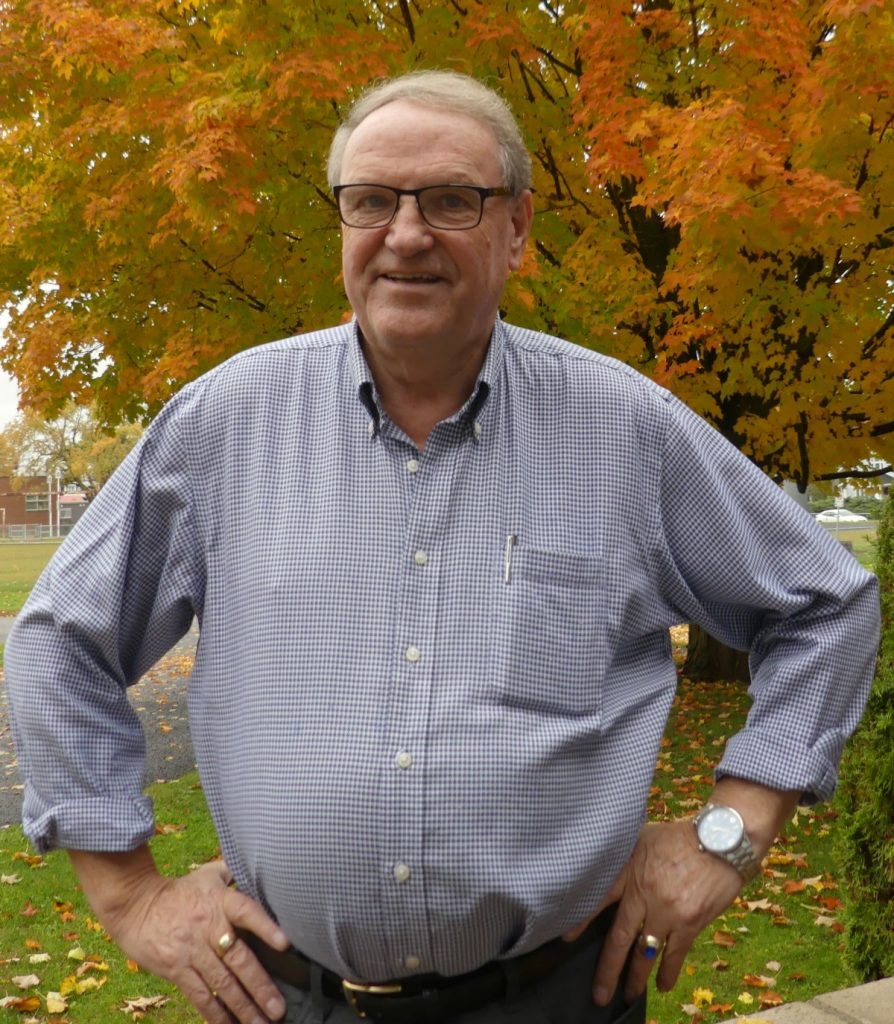 Award-winning salesman for Ottawa Valley Harvestore, Henk Huizenga retired from his full-time position at the end of October. He plans to work for the company one day a week from home. (Nelson Zandbergen photo)

Henk Huizenga found his calling in sales at age 49

WINCHESTER — He climbed the heights of blue silo salesmanship in North America and now Henk Huizenga is easing down the ladder into what he intends to be a busy retirement.

Huizenga, 77, says he found his true career calling in middle age — 28 years ago — after a call from Ottawa Valley Harvestore. Huizenga was a long-time partner and service manager at Metcalfe Service Centre. But when that closed down, Huizenga was hired as Harvestore’s operations manager at North Gower.

He had the opportunity to make some sales along the way and impressed the higher-ups at Harvestore with his numbers. In his second year, he shifted full-time into selling and went on to become, more than once, the blue brand’s top salesman in North America.

While there was a definite sales aspect to his 23 years behind the service counter at the Metcalfe tractor dealership, Huizenga concedes his 1995 entry into full-time sales with Harvestore was an eye opener. “With sales, it was a whole different lifestyle,” he says. “It was relaxed. You had time to talk to people.”

He adds with a chuckle, “I said to myself, ‘You should have done this 20 years earlier,’” though he concedes his younger self probably wasn’t up to it at the time.

A 25-year-old Huizenga arrived in Canada in 1970, travelling by ocean liner from Holland with his wife, Fran, and their two small children. He had taken mechanics in trade school and did his mandatory service in the Dutch army, where he was responsible for the maintenance of 135 military vehicles.

The young immigrant family first lived in Nova Scotia as Huizenga filled a previously arranged job on a combined hog and dairy farm. He and his farmer employer — a fellow Dutchman — didn’t see eye to eye, however, prompting the family to depart less than a year later for Ontario. But not before the newcomer left his innovative mark on the maritime farm. He cobbled together a simple electric elevator to move the hogs from the barn basement, where the animals were raised, into a waiting truck. The owner previously forced the animals to walk up an inclined plank, a process Huizenga found exhausting. His personally installed solution moved two pigs up at a time, inside a crate, at the flick of a switch.

“The farmer thought that maybe I should go back into mechanics,” recalls a smiling Huizenga, who is today very well versed in the wonders of farm automation — and is quick to sell its benefits in relation to Harvestore products.

The brand’s blue silos dominated in the 1970s, when farmers had fewer feed storage options to choose from, though the technology continues to be an important player, according to Huizenga, who points to more recent innovations like bunk silos, big round wrapped bales and ag bags, as well as traditional upright concrete silos.

He can’t help but tout Harvestore’s industry-leading low-spoilage rate of 4% as a continued feature through the decades. The bottom unloading design also ensures that cattle always receive properly fermented feed for maximum milk production, he says.

The arrival of robotic feeding systems has led to “somewhat of a resurgence” for Harvestore in the last 10 to 15 years, he adds, with feed automatically conveyed from silos to waiting robots beneath feed chutes. More recently, he was happy to see Keenan feed mixers added to the lines sold by his employer.

He’s watched the major evolution of farming with fascination over the last 50-plus years since he first entered the agribusiness realm when hired “on the spot” at Metcalfe Service Centre in 1971. Since then and through two careers, he’s been privileged to deal with three generations of farmers at a number of area farms, he says.

Huizenga says he’s going to especially miss going on the road to regularly visit existing and prospective farm clients following his official retirement on Oct. 31. He won’t be disappearing, though, as he intends to continue working one day a week for Ottawa Valley Harvestore from his Winchester home. He’s also open to other sales opportunities in completely different fields.

“What else am I going to do? Become a Walmart greeter,” jokes the grandfather of six, who admits to climbing to the top of only one Harvestore silo — a 90-footer — in his lifetime.

He also looks forward to focusing more time on the Osgoode Male Choir he helped found in the 1990s. It doesn’t matter that his voice has gone raspy with age. Huizenga says he just moves his lips and carries on if his voice gives out during a performance.