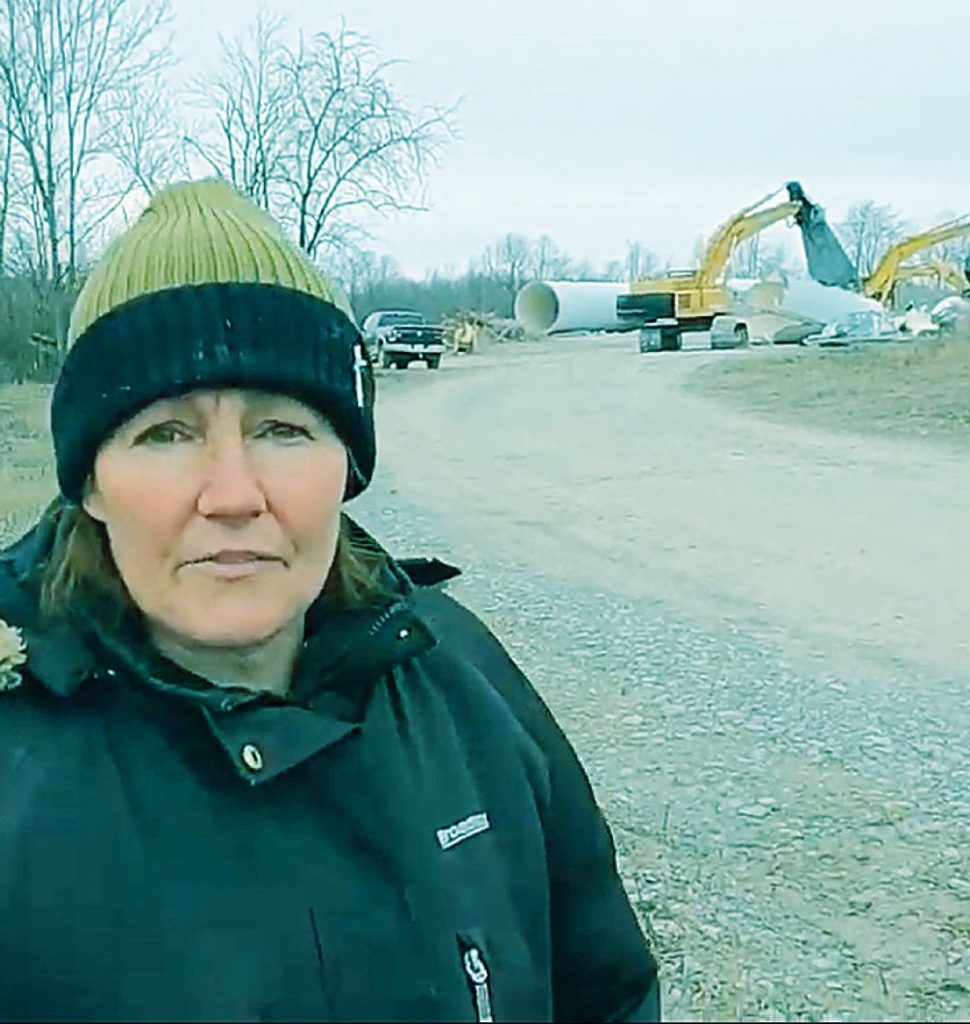 Landowner Jennifer Ackerman calls the tear down an environmental disaster. Oddly, no one complained about the environment when the big machines tore up fields to put in the turbines.

It took years of planning, fighting, and building and now three Prince Edward County wind turbines are being trucked out of the county.

The Prince Edward County wind turbine project is a case study in painful planning and waste. The project had initially planned to erect 29 turbines. But it was forced to scale back to nine turbines. By the time all of the truckloads of steel and concrete were hauled to the construction sites four wind turbines were finally completed and five more were about two weeks from being erected. Now the turbines are being dismantled as parts are being trucked away and much of the metal is being sold for scrap. It could take until October to haul away all of the metal and another two years to return the roadways back to their original condition, said Picton hauler Drew Harrison.

Harrison had contracts to put in the roads, a contract for a wind turbine on his property and a contract to take the roads out. “It’s ridiculous. Millions of dollars worth of work was done,” he said. “And now there’s millions of dollars of work to take it down again. It breaks my heart to take all of this infrastructure out of the ground.”

As turbines were being dismantled last month new voices began calling the dismantling an environmental disaster. The tear-down caused messy roadways to get the metal out and to take the top three feet of concrete off the turbine base. What was left was a foundation in the ground of about 30 ft. deep or more of concrete. There were no complaints about so much concrete going into the ground when the project began.

Getting rid of the turbines will save the province money, according to local MPP Todd Smith. Yet, all the contracts to local landowners will be paid and the wind turbine company settled for a multi-million dollar cheque that included a cancellation fee.

A resident, who watched the dismantling but would have benefitted from hosting a wind turbine, was incensed. “It’s an environmental disgrace,” said Jennifer Ackerman, as heavy equipment rumbled across her property. She is a property owner who agreed to have a turbine erected on her 165 acres. Residents say the project was only a few weeks away from completion and would have provided a great tax base for the local community, annual funding for the local hospital and the province was only paying 12 cents per kilowatt.

About 10 years ago wpdCanada submitted a plan to the province to develop the White Pines Wind project.
A local opposition group argued that the Blanding’s turtle in the area was an endangered species. Even though the group could not say how many turtles needed protection, the turtle won in a 2016 provincial environmental review tribunal. The tribunal determined that “a small number of adult turtles will be killed annually.”

A Finch group tried a similar strategy but failed to stop a project there based on saving bats. Amherst Island is littered with wind turbines even though biologists call the island the owl capital of Canada as there are 13 species there.

It took a provincial Act in 2018 to end 750 renewable energy contracts and force the Prince Edward turbines to come down. The wind turbine company spent months selling off turbine parts and more recently began removing the metal tubes.

The County Sustainability Group, green advocates led by Don Ross, sees nothing now but waste. “Why not show some integrity and good faith and renegotiate the contract,” he says. He says the project was weeks away from starting up and now it’s coming down.

Ackerman chuckles at the “concern” about the turtles. “I’ve never seen one here.” Although local resident Parker Gallant said he has seen Blanding’s turtles in the area Drew Harrison said the turbines were on hard shale that would not attract turtles.

“There was widespread opposition throughout the county,” according to Orville Walsh. The Picton resident is the President of the Alliance to Protect Prince Edward County. He sees significant savings for the taxpayers with the cancellation. “The decommissioning costs were to be covered by wpdCanada at the end of the contract unless it was renewed.”

Getting to the bottom line in terms of costs is what concerns former MPP Gary Fox, a sheep farmer and owner of a field of solar panels. “It’s astronomical, the money it’s cost” to tear the project down, he said.

Local MPP Todd Smith (Conservative-Bay of Quinte) said in a statement to Farmers Forum that “I campaigned for seven years on keeping the County naturally green and turbine free and was proud to be able to follow through on my promise.”

In a statement from the Ministry of Energy, Northern Development and Mines:
“Total compensation for the termination of the White Pines Wind project is still to be finalized as there are a number of activities, such as further decommissioning, that need to take place. Until these activities are complete, the Ministry cannot provide a final total for compensation costs.”

The statement also noted: “Winding down more than 750 renewable energy contracts is expected to avoid $790 million in long-term electricity system costs. The $790 million includes the avoided cost of payments to generators under these terminated contracts minus the replacement energy and capacity costs over the term of the contracts.”