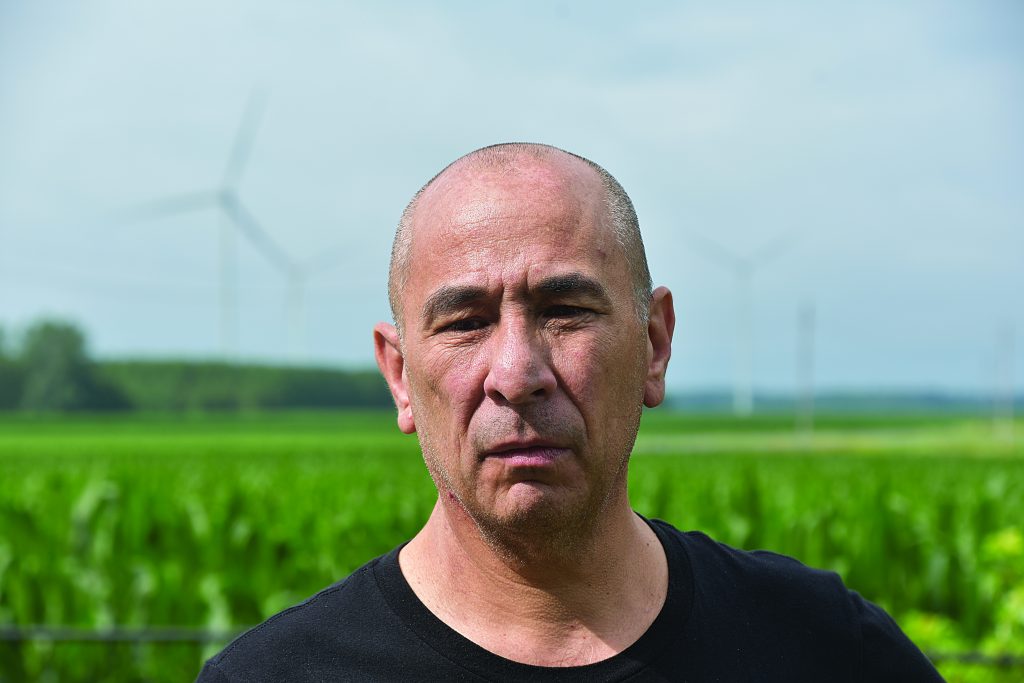 Randy Lamb was okay with the wind turbines until they arrived and he saw how big they were. (Nelson Zandbergen photo)

CRYSLER — To hear Randy Lamb talk about residing at the epicentre of about a dozen Nation Rise turbines life has become something of a living hell.
Six wind turbines, soaring 132 metres high to the hub, are within a couple of kilometres from his residence, including the nearest pair about one kilometre away. Another half dozen are farther away but still prominent on the horizon, in all directions.

“We don’t know what to do anymore,” says the 55-year-old former chef. “I worked my ass off all my … life, to get a beautiful retirement home. But now I’m going to have to move. If this continues on, I’m going to have a heart attack.”

Lamb says he suffers from high blood pressure, heart palpitations, stinging pain, stress, anger and depression these days — symptoms that disappear when he leaves the property. He was free of health problems before the 29-turbine project was erected in North Stormont Township, he says.

“Lately, I’m just drained … I’m stressed, I’m depressed. I think it’s caused by the turbines,” he remarks, attributing his health issues to both sound and infrasound produced by the turbines.

Lamb says he wasn’t initially concerned about the project until he saw the actual size of the turbines, combined with the construction noise that shattered the tranquility around his place. A slew of trucks travelled back and forth into fields on either side of his property.

He says matters came to a head in September 2019 when a project construction crew taunted him with “whoops” during a particularly noisy phase of the work when a power cable was being trenched “15 feet” from the west side of his house. He says he and a foreman ended up pointing cell phone cameras at each other from across the street when Lamb flashed his buttocks — an act he has previously described as “barely half a moon.”

“I blew up, and then he calls the police,” recalls Lamb, who was arrested and charged with Indecent Exhibition and Causing a Disturbance. He says he agreed in court to make a charitable contribution and was placed on a peace bond for a year.

According to Lamb, his wife, Madonna, only gets three to four hours of sleep each night.

So, while there is no direct link between wind turbines and human health, this does not discount the possibility of psychosomatic illness. Simply put, a person’s reaction to something that includes stress is known to cause other ailments.