Does Ottawa want a food shortage? Federal government wants to cut nitrogen fertilizer by 30 per cent but that will reduce food supply, farm group says

OTTAWA — The federal government has proposed cutting farm nitrogen fertilizer usage 30 per cent by 2030 but says reductions on farmland will be voluntary. That’s raising eyebrows.

Opposition agriculture critic MP John Barlow (Conservative — Foothills) doesn’t believe it, predicting farmers won’t have a choice but to comply in the end.

“I think when you have Steven Guilbeault as the minister of Environment and Climate Change, who has been very public over the years on his animosity towards traditional agriculture and the family farm model, I think he looks at agriculture as the opposition,” the Alberta MP told Farmers Forum. “And with that eco-activist mentality of his, he does not suspect that such things as fertilizer reduction would be a voluntary measure.”

Prior to his ascension into the Trudeau cabinet, Guilbeault spent 20 years as one of Quebec’s highest profile environmental protesters. A belligerent opponent of Canada’s natural resources sector, he was arrested in 2001 after scaling Toronto’s CN tower to besmirch this country’s fossil fuel industry on behalf of Greenpeace. 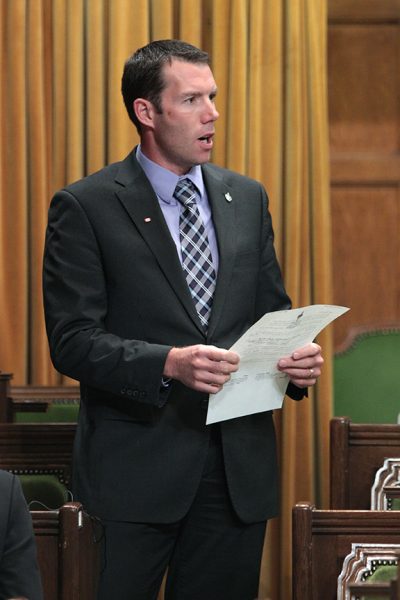 Noted Barlow: “The Liberals have given me no reason to trust anything they say when it comes to their approach to agriculture.”

Curtailing fertilizer usage by even 20% could cost Canadian grain and oilseed growers nearly $48 billion in lost sales because of lower yields over the next eight years, according to a study commissioned by Fertilizer Canada last year.

The new Agriculture and Agri-Food discussion paper repeats the assertion that Canadian agriculture emits 10% of this country’s greenhouse gases (GHGs). Nitrogen fertilizer is said to contribute by off-gassing nitrous oxide, which the paper claims is up to 298 times more potent as a greenhouse gas than carbon dioxide.

The Trudeau Liberals have been talking about fertilizer cuts since December 2020, as part of the government’s pledge to radically reduce emissions below 2005 levels by 2030. The pledged overall greenhouse gas reduction was already a whopping 30% before Trudeau upped it to 45% before last fall’s COP24 conference “with no consultation,” Barlow pointed out.

“They make these announcements with no understanding of what agriculture’s already doing,” he complained. Farmers themselves argue that fertilizer is expensive and for that reason alone they don’t want to use more than they need.
“To assume that Canadian farmers and producers aren’t doing everything they possibly can to be more efficient, to protect their soil and water, just shows how tone-deaf they are, and the lack of knowledge they have about the modern practices of producers for decades,” Barlow said.

Grain Farmers of Ontario Chair Brandon Byrne similarly said that farmers “have done a lot in the last 25 or 30 years to make sure they’re utilizing the fertilizer they’re putting down.”

The implications of cutting fertilizer is “a scary situation,” Byrne said, adding that it means “you’re looking at cutting food supply.”

Byrne added that there would need to be an “iron-clad rationale” for a 30 per cent reduction policy. “And I just don’t think it’s there right now, and I don’t think people understand some of the other things that would go along with it. If you’re producing less, there’s potential for even higher food prices in stores. There’s a chain reaction that would happen there, if it’s not worked out … it’s not really something you want as a nation, in my opinion.”

Byrne noted that the grain farmers “just want the government to work with us.”

The federal discussion paper does call for public input, until June 3, at aafc.fertilizer-engrais.aac@agr.gc.ca and further virtual discussions are planned in the coming months as well. The paper also acknowledges that the industry’s favoured ‘4R’ fertilizer initiative — a conservation-minded technique advocated by mainstream farm groups — may be able to achieve the government’s goal of reducing nitrogen use by 30% below 2020 levels, by 2030, if more widely adopted. The 4Rs stand for the right source, the right rate, the right time and the right place.