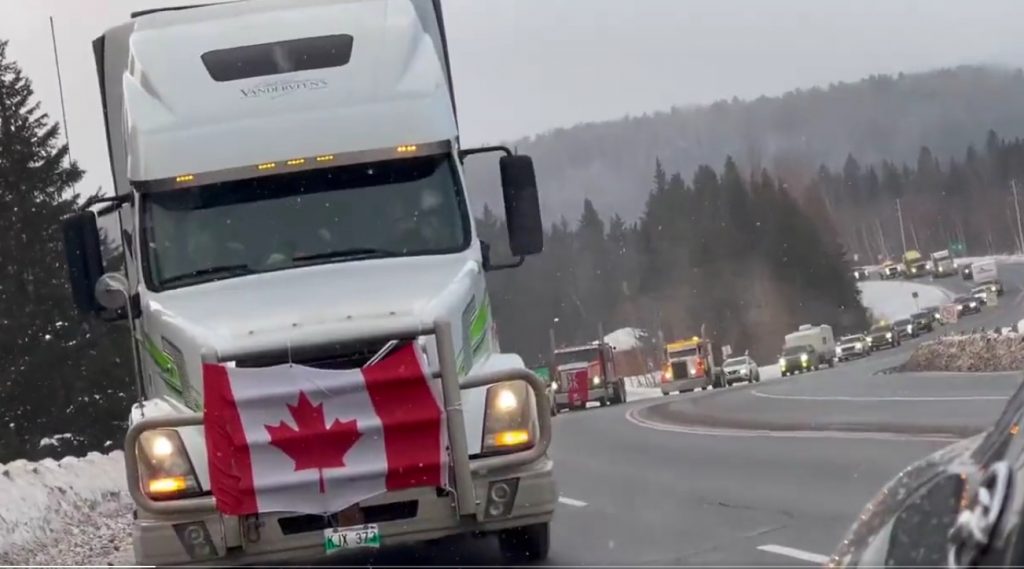 OTTAWA — It took just one week to mobilize thousands of people and more than 1,000 trucks in a nationwide rally for freedom that was joined by many Eastern Ontario farmers and truckers.

Though sparked by Ottawa’s cross-border vaccination requirement, the convoy captured the imagination of many Canadians who lauded the truckers as heroes for standing up to government overreach and lockdown rules that have created Canada’s biggest social and economic crisis since the Second World War. At the same time, the rally that ended up at Parliament Hill on January 29 repulsed the far left-leaning, including the Liberal Party that viewed the event as an anti-Canadian horror show.

Peterborough custom farmer and trucker Brian Haass was quick to get on board and decided to drive to Ottawa with seven employees in three or four trucks, equipped with a portable toilet, barbeques and cases of water. He planned to cook meals for demonstrators until he ran out of food.

“You’ve got to do something,” said Haass, who argued that the issue is no longer about COVID. “COVID is over. It’s now the common flu. This is about freedom. This is about rights. This a communist country now.”

He said he does not know anyone in the rural area who opposes the truck rally but conceded that farm lobby groups are reluctant to get involved. On the other hand, The Canadian Chamber of Commerce, the Canadian Manufacturing Association and the Canadian Federation of Independent Grocers have urged the federal government to delay the cross-border vaccine mandate.

The east is joining the convoy as truckers make their way to protest in Ottawa this weekend. pic.twitter.com/KpHbtxUifH

Vankleek Hill elevator operator Kevin Wilson said he feels badly for truckers being belittled by the government and planned to roll one of his company trucks and a grain trailer in the convoy, accompanied by two employees. Truckers are “feeding the supply chain that keep businesses going, that keep the propane into your house, that keep gas at the gas station,” Wilson said. “That’s why I support them.”

Three days before the rally reached Ottawa he suggested it would dwarf the famous farm-tractor protests of the late 2000s.

The same day, Ottawa police said they expected to see 1,000 to 2,000 vehicles in the city. A number of landowners in the Ottawa area opened their lots to accommodate the influx of trucks. Wilson himself hosted two visiting truckers at his farm property.

Lanark crop farmer John Vanderspank was a leader in the tractor rallies and was quick to join the trucker convoy. He recalled how 300 tractors easily stopped downtown Ottawa traffic. Imagine what just 1,000 trucks could do, he said.

A Facebook post suggested a line of trucks took four hours just to travel through one town in Manitoba.

Unlike the tractor rallies, Vanderspank said that there were so many trucks coming in from so many directions, and even across the U.S. border, he decided not to even try to make it all the way to Parliament Hill.

“Everybody’s fed up,” he added, noting that much of the United States re-opened 18 months ago. “People are ready to explode. Most people are waking up to the bullshit.”

Vanderspank added that people need to avoid the mainstream media that is painting the truckers as terrorists. “We’re just hard-working people” who want their freedom back, he said.

The Canadian farmers are now joining the 50,000 Canadian truckers in their convoy for freedom towards Ottawa. #Canada #CanadaTruckers #TruckersForFreedom2022 #ConvoyForFreedom
🇨🇦pic.twitter.com/U3H1tuwcGo

He added that it was nice to see the “quiet, little guys like farmers and truckers” having their voices heard.

South Mountain dairy farmer Yann Bossel agreed with the organizers’ basic message, starting with “freedom from coercion.” He added: “Take down the mandates. There were zero issues over the last 20 months relying on these men and women.”

Shawn Leakey, employed at McCann Farm Automation in Seeley’s Bay, also planned to join the rally behind the wheel of the company’s dairy-supply route truck. Leaky said the agribusiness that employs him has felt the pinch of supply-chain problems related to the trucking shortage.

“We’re having a problem right now getting products” said Leaky, who also moonlights as a big rig driver for a buddy’s transport firm. “We’re scrambling to put products on our shelves, so farmers can keep their equipment clean and supply food to feed the country.”

In less than a week, and two days before the Ottawa rally an online Gofundme campaign launched by Amara Lich, a Maverick Party secretary, generated more than $6-million in donations from over 78,000 contributors to help truckers pay for fuel.

Numerous reports pegged the procession of trucks at 100 kilometres in length.

The Canada Unity Foundation is one group that organized the event and said the rally has nothing to do with the vaccine itself as some demonstrators are vaccinated and other aren’t.

Not all local farmers are behind the trucker rally. One said it was a big party destined to spread COVID. Another said it might be more effective if all truckers simply stayed home for a week and sat on their keys. 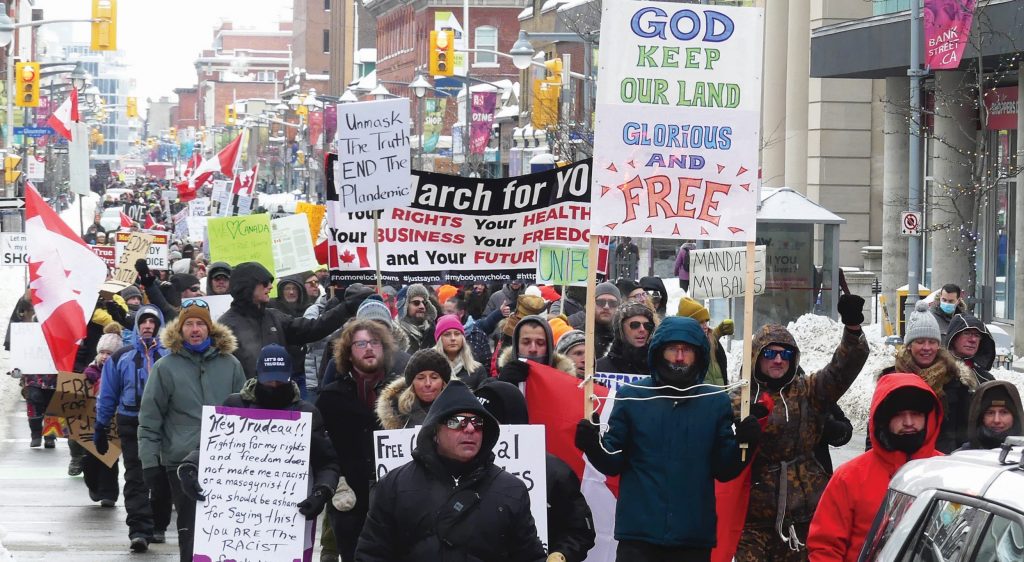 About 3,000 people descended on Parliament Hill in Ottawa on Saturday, Jan. 20 in frigid cold -17 C weather for a freedom and anti-mandate rally. The event included Canadians who have lost their jobs because of the vaccine mandates, entrepreneurs who have lost their businesses and one man who said he knows two people who committed suicide because of lockdowns. They marched through the city core chanting slogans including: “My body, my choice.” Colourful signs included: “Think, before it’s illegal,” and “No fear. Take your mask off. Smell the bullshit.” Thousands more demonstrated in Toronto and Vancouver. Two people were arrested at a rally in Fredericton, New Brunswick. Similar events were held in cities around the world. (Nelson Zandbergen photo)