BREAKING NEWS
16:02
Home News TRAGEDY TO TRIUMPH: Paralyzed after accident, farm boy back in the combine

TRAGEDY TO TRIUMPH: Paralyzed after accident, farm boy back in the combine 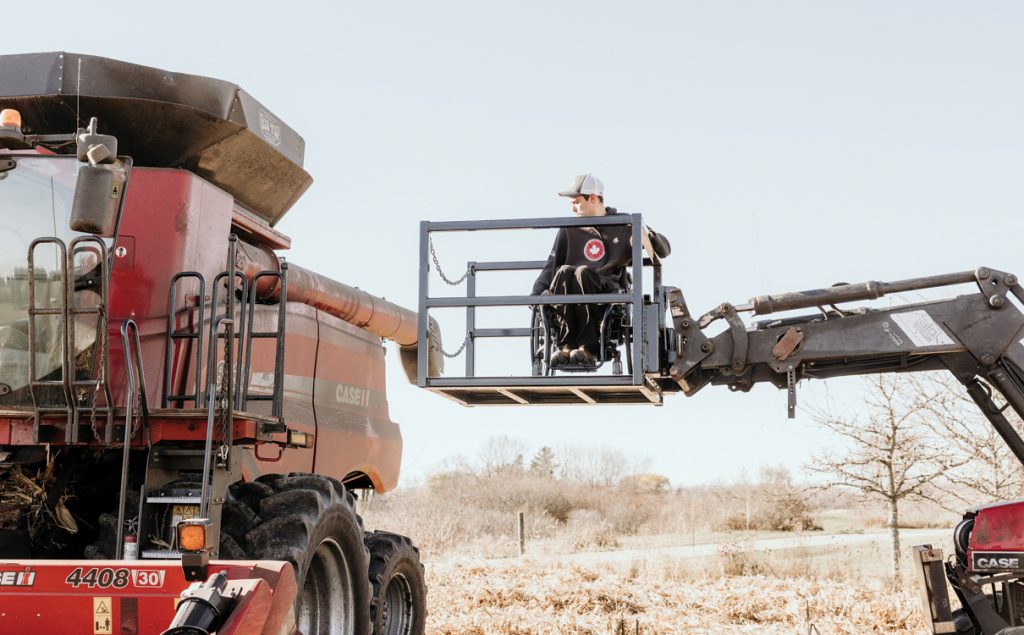 Garrett Dieleman has help to get into the cab to help with the farm’s harvest last fall. The Dieleman family farms more than 2,000 acres. (Jodie Aldred Photography)

WALLACETOWN — At age 20 and fresh out of Ridgetown College, where he studied agriculture, Garrett Dieleman was one of many up-and-coming farmers in the area. He lived just west of town, southwest of St. Thomas, and was often found on the family crop farm working with equipment and driving transport.

They had just recently finished up wheat harvest, and on August 18, 2019, he was with family and friends on the farm, when he dove into a shallow above-ground pool and his life changed forever.

Waking up the following day to see what was on the farm agenda was no longer a priority.

“I have a C5-C6 fracture,” Garrett, now 23, explained. “Paralyzed from the shoulder line down, leaving me with some impairment to my arms and all of my fingers.”

This was the beginning of Garrett’s new journey navigating life and learning how to do so paralyzed, as a quadriplegic, paralysis of both legs and limited use of his arms. The cervical fracture left Garrett with arm movement and some strength to do things on his own. His grip was significantly impaired. He can’t stretch out his fingers but he can use a touchpad screen and a wheelchair.

“I spent five months at Parkwood London for rehab,” Garrett said. “It was a positive environment.”

The centre specializes in rehabilitation of spinal cord injury, brain injury, amputations, palliative care and mental health care. He was “nervous to leave Parkwood where I had all the tools to make life easier.”

Spring of 2020 arrived and Garrett no longer looked at the hood of tractors from the driver’s seat in the cab but from his bedroom window. “The first year at home, not farming was aggravating. I’d watch tractors come in and out of the yard for fuel, and semis leaving.”

He wanted to contribute to the farm or even off-farm but had no idea where to start. He didn’t think farming would ever be possible again.

He spent as much time as he could in therapy given Covid-19 restrictions shut a lot of appointments down. He started to really work on therapy at home, spending hours on exercises to build strength in his upper body, his arms and hands.

Garrett’s first goal changed everything for him. By the fall of 2020, he moved from a powered wheelchair that he steered with a joy stick to a manual wheelchair powered by his own arms, offering him more independence and boosting confidence. Once he realized that he might one day get back into the combine, it was enough to keep him focused and driven.

Fast forward to December 2021.  Garrett did some research and decided to join a wheelchair rugby team in Dorchester. “This gave me something to look forward to, a way to meet new people and mainly to try something new and set goals.”

Garrett attributes a lot of his success to his rugby teammates and especially his player-coach, Dave Willsie, who inspires him. “We have similar personalities” Garrett explained. Willsie is easy going and easily laughs. Garrett said he finally clicked with someone who understood him. 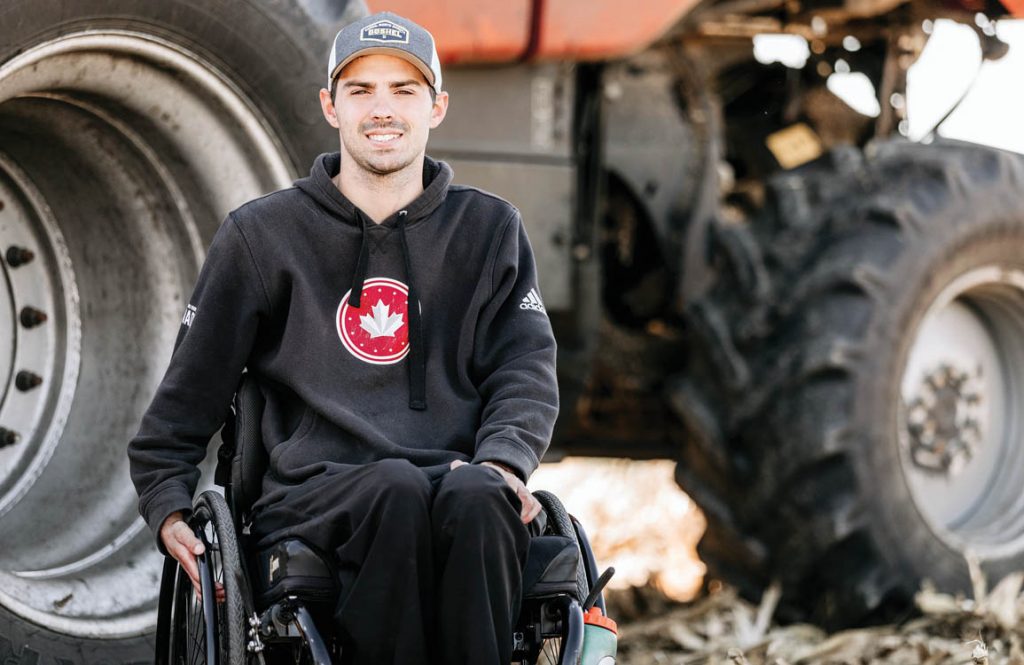 Rugby introduced Garrett to a whole new crowd who better understood his daily challenges. “Teammates were able to give me tips on how to get dressed in the morning, how to transfer into my wheelchair better from say chair to vehicle, and many other tips and tricks.”

He began thinking about how to get back in the tractor cab. With more thought, the combine made sense being driven with hydrostat controls, making it easier to operate than a standard tractor. His repair shop owner father went to work on building adaptive equipment, while Garrett worked on strengthening his body. The goal was to be in the cab in 2023 but that seemed like a long way off.

Garrett had other plans and goals. He purchased a used modified truck for handicapped drivers to get around locally and began a full-time job for Great Lakes Grain in the spring of 2022 as a merchandising assistant. Garrett works remotely and goes into the office one day a week. He handles logistics and the grain loading schedule at branch locations. This built his confidence to work again with people and work with a team.

July 15, 2022, was the first day of the Dieleman family wheat harvest. A regular day just like any other. One giant detail didn’t go unnoticed. Garrett was back in the cab! Just three years after his accident and one year ahead of his goal. “It felt like I never left,” he said. “It was the best feeling ever.”

When asked if he had tips for someone going through the same thing, he jokingly said “just give me a call.”

He did offer this advice:

1) “Find someone you connect with.”

2) “Don’t put yourself through so many failures you want to give up. Find someone who can help you”

3) “Take bits and pieces to mash it into what works best for you. Every disability is different.”

Garrett is figuring out what works and what doesn’t on the farm. He owned a side-by-side to ride around in but found it difficult to get in and out of. Then he found the Baytec Handbike that can reach a speed of 25 km/h and get through rough terrain on the farm.

The hand bike is a one-wheel attachment to the front end of his wheelchair and comes equipped with a motor and dirt-bike style handle bars. When it’s attached, the wheelchair looks similar to a three-wheel dirt bike.

Garrett has come a long way from piecing together hope for a future to a young man with plans. Goals are key. His future plans include boating and traveling more in the off season and attending the Commodity Classic.

After a successful 2022 wheat, soybean and corn harvest, his goal now is to modify more pieces of equipment for him to be even more involved in the 2023 season.