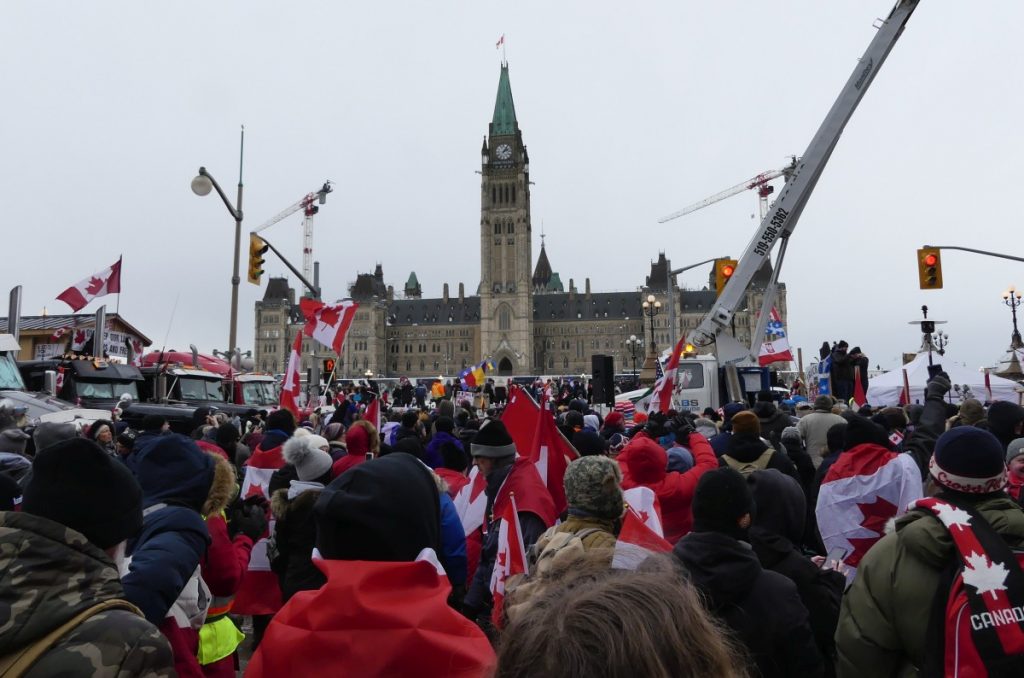 In February, farmers joined truckers to protest vaccine and pandemic mandates in what would become the top news story of 2022.

OTTAWA — Farmers headed into 2022 amid strong crop prices that followed one of the most bountiful growing seasons in living memory. Alongside this optimism, however, was an intensified societal malaise fuelled by a final spasm of pandemic restrictions imposed by the Ford and Trudeau governments.

The year began with another round of closed classrooms, restaurant dining rooms and workout gyms.  Not to be outdone, the feds on Jan. 5 slapped a vaccination requirement on cross-border truckers, turning one-time pandemic heroes into pariahs.

It was a wild year. Here’s Farmers Forum’s list of top 10 stories.

1. The Freedom Convoy in Ottawa: The most effective and maligned single protest in Canada’s history

In the most potent act of political protest seen in Canada this century, hundreds of truckers stood up and made their voices — and horns — heard. The newly imposed cross-border COVID vaccine mandate proved the final straw and kicked the “Freedom Convoy” into gear. Many farmers sympathized with the truckers and rolled their tractors into downtown Ottawa. Others held slow rolls in solidarity in  small communities across the province. In an unprecedented move, the Trudeau government invoked the Emergencies Act and compelled banks to freeze over 200 bank accounts while police cleared out the streets over the course of a weekend, by using physical force on what police themselves described as a peaceful protest. Police smashed truck windows, hit protestors with the butt-end of rifles and used teargas, rubber bullets, armoured vehicles and platoons of police officers armed with wooden sticks. Farm Credit Canada also drew up a blacklist of clients sympathetic to the protest. Police organizations and CSIS testified at an inquiry that the protest was peaceful. The Canadian Civil Liberties Association sued the federal government for wrongfully using the Emergencies Act. The Justice Centre for Constitutional Freedom is appealing its lawsuit against the federal government for forcing vaccine mandates that saw thousands of Canadians lose their jobs while defending their constitutional right to their own bodies.

Pandemic mandates largely melted away in the ensuing weeks and were gone entirely by year’s end. The Trudeau government ultimately dropped the international vaccine requirement (and the hated ArriveCan app) and never proceeded with a planned expansion of the rule to include domestic ports and feed mills. Premier Doug Ford dropped the mask mandate in March and critics blamed – others praised – the truckers.

The protest also shifted the paradigm within Parliament. Does anyone really doubt the Official Opposition Conservatives would still be led today by Erin O’Toole if not for the horn blasts of the working class?

2. We are not back to normal: Fear, division and distrust remain

This is not about one event in 2022 but a theme that seeped into almost every story and gnawed at the human spirit.

The lockdowns are over. There is no more social distancing and masks are voluntary, except in hospitals, medical clinics and similar services. Most people are working again but we are not back to normal. We have emerged from lockdowns into a world that has changed. The collective mood has shifted. Fear lingers. Fear of COVID. Fear of the vaccine. Fear of loss of freedom. Fear of neighbour. The country is divided and anger now separates many family members. We have collectively never been so unhappy. Many families are fiercely divided over the vaccine, politics and lifestyle points-of-view and more and more people cannot simply agree to disagree.

Many people spent 2022 in the way many others spent 2021, succumbing to new addictions. Smartphone addiction and drug addiction are up. Alcoholism is up. Overdoses are up.  Suicide is up and suicide by physicians is way up.

Trust in the system has plummeted. You name it: The mainstream news media, social media, government, health care, education. As day follows night, bad decisions and bad management has created disenchantment and distrust. The country ended the year struggling under a cloud of a new normal, a psychological tampering of human spirit.

Farmers were heroes feeding our nation until one day they woke up to learn they were polluting villains. The climate craziness ramped up in 2022 as federal policymakers increasingly nudged Canadian agriculture into the same box as the fossil fuel industry — to be treated as a climate-change problem in need of a top-down fix. Fertilizer joined fuel in the crosshairs of a government eager to curtail use of both. No matter that farms and agribusinesses were still smarting from the 2019 imposition of the federal carbon tax, complete with automatic increases imposed every April Fool’s Day. While tractor fuel is exempt, the gas and propane used for farm trucking and crucial grain-drying and barn-heating are not. The carbon tax will increase again on April 1.

The supply-managed dairy sector — reliant on special marketing powers bestowed by the government — came out as solidly on board with Ottawa’s overarching ‘Net Zero’ pledge in 2022. That’s the Trudeau government’s promise to entirely eliminate the net output of greenhouse gases in Canada by 2050. That means not only decreasing methane and carbon dioxide but now also a 30 per cent reduction in nitrous oxide emissions from fertilizer. Grain Farmers of Ontario argue that this would limit farm productivity and cause food insecurity.

The Dairy Farmers of Canada launched a series of YouTube videos in which individual producers declare, “I’m In” with Net Zero. Both DFC and its provincial counterpart, the Dairy Farmers of Ontario, expressed confidence in their ability to make milk without carbon emissions 28 years from now. But the marketing board has a huge marketing challenge ahead of it as many farmers don’t believe it’s possible.

Farm groups feared it wouldn’t be long before the Trudeau government’s “voluntary” nitrogen reduction goal — as described by the federal ag minister in 2022 — turned into a hard rule. The fact remains that Ottawa aims to curtail farm nitrogen oxide emissions 30 % by 2030.

That goal, Fertilizer Canada warned, would cost Canadian farmers $48 billion over 8 years and curtail food production at a time when the planet needs it. The idea also carried the inherent insult that central planners know better how to most efficiently deploy fertilizer than the farmers who are already under plenty of pressure to keep their fertilizer costs in check

Prominent farm groups like the Ontario Federation of Agriculture and Grain Farmers of Ontario remain unhappy and are lobbying against a hard fertilizer cut, favouring instead the long-standing ‘4R’ nutrient stewardship strategy.

Provincial governments were also roiled when Ottawa insisted on building a fertilizer cut into the next five-year term of the agricultural policy framework (now renamed the “renewable” agricultural policy framework). Finalized in July, the framework guides the way federal and provincial tax dollars are used to support farmers. So incensed were Alberta and Saskatchewan, they both passed special legislation to protect their farmers from federal overreach on the fertilizer file. Ontario Ag minister Lisa Thompson also expressed her opposition to fertilizer cuts in the framework.

Meanwhile, Ottawa signed on to the COP15 biodiversity “landmark agreement” in December committing Canada to a 50% cut in pesticide “risk” by 2030.

6. Inflation takes off — so do interest rates

You throw hundreds of millions of dollars in newly printed money at people and you deflate its value. When more money chases fewer goods, the price of the goods goes up.

Factor in a war in Ukraine, supply chain anxieties and a closed door on new Alberta oil production, then Houston, we have a problem.

By March of last year, crop farmers who hadn’t locked in prices were on the verge of panic. Prince Edward County farmer Lloyd Crowe said fuel costs had doubled in one year and fertilizer costs had tripled.

Fuel costs seemed to be top of mind for farmers everywhere and critics argued that Canada was the master of its own fate. Canada waged war on fossil fuels with no affordable alternative, argued Dan McTeague, president of Canadians for Affordable Energy.

Almost everything was a lot more expensive, including the next farm expansion. The overall inflation rate peaked at 8 per cent in June last year. The Bank of Canada increased the prime lending rate seven times in 2022, ending the year with a rate of 4.25 %. That pushed banks to increase their lending rate to 6.45 % last month.

7. N-Tariff on Russian fertilizer was a tax on Canadian farms

Canada was alone in the developed world when it opted to hurt its own domestic farmers by slapping a 35 % tariff on Russian (and Belarusan) fertilizer even though orders were made before the Russian attack on Ukraine.

In December, Finance Minister Chrystia Freeland appeared to slam the door on a refund by sending $115 million collected on Russian goods — much of it fertilizer — to help rebuild Ukraine’s war-shattered electricity infrastructure.

A devastating wind storm pounded Ontario on May 21. The so-called Derecho wall of wind crossed Michigan and barrelled down on Southwestern Ontario decimating dozens of barns and sheds. In some areas the high winds reached a top speed of 190 km/hr. Hydro One estimated the storm toppled 800 hydro poles. It was hard to imagine that the destruction at each farm only took three minutes. At Mount Brydges, cash cropper Becca Bakker’s hay barn was flattened. Two days after the storm, 226,000 Hydro One customers were still without power. At Woodstock, Faircrest Farms manager Lois Holder said they lost power for three days. Peterborough, Uxbridge, and three other Eastern Ontario municipalities declared a state of emergency. The city of Ottawa said the storm was worse than the infamous 1998 ice storm.

The issue gained traction after the Ontario Veterinary College at Guelph published the results of an online survey of  nearly 1,200 farmers across the country and found that one in four farmers said that their life was not worth living. Psychotherapists agreed that farmers harbour suicidal thoughts at a rate twice as high as the general population. The survey also found that farmers suffered from higher levels of stress and emotional exhaustion.

Avian flu made its biggest-ever impact on the poultry farms of Ontario in 2022 — especially in the southwestern and western end of the province  — and it’s not over yet as 11 Ontario farms were still listed as infected during the second week of January 2023.

The first infected poultry flock turned up March 27 in the Guelph area. By year’s end the Canadian Food Inspection Agency counted 43 infected flocks, slapping down as many temporary quarantine zones. The affected operators were left to pick up the heartbreaking pieces. Infected farms had to cull and compost their birds and thoroughly clean their barns before getting the OK to restart. Full recovery from infection took weeks or months to return a flock to the same life-cycle stage as before a cull.

Wild waterfowl are major carriers of the bug and outbreaks coincided with those birds’ spring and fall migrations. Ontario had 26 poultry flocks test positive for the disease between March 27 and May 18. There was a lull in new outbreaks until Sept. 17, when a group of 13 flocks gradually came down with the disease through Dec. 21.

Western and Southwestern Ontario accounted for 33 of Ontario’s 43 infected sites in 2022.