THE LONGEST YEAR: Acredale Farms lost its entire milking herd in a devastating fire and it’s taking months to recover 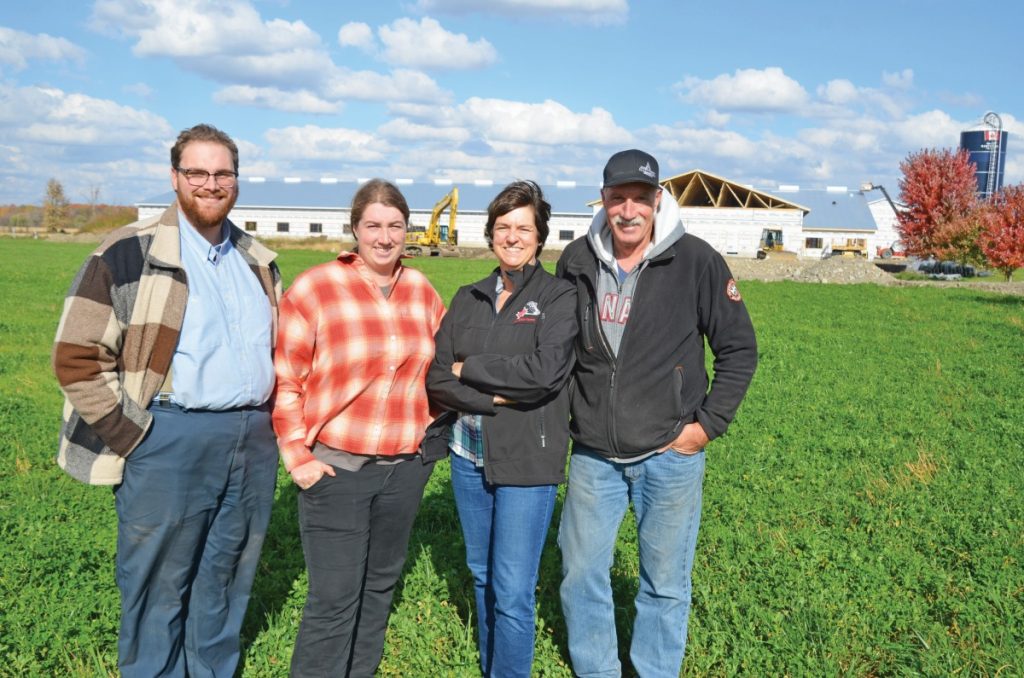 From left: Cole and Jasmine Rooney, and her parents Janet Acres Smiley and Robert Smiley — the partners at Acredale Farms. (Nelson Zandbergen photo)

MANOTICK — It only took 15 minutes for the fire to rip through the tie-stall barn and wipe out 127 dairy cattle, including 85-milking cows.

Janet Acres recalls that she was on her way to pick up supper in Manotick when she saw smoke coming from the direction of the farm and turned around. “Your heart drops and you’re thinking, ‘I hope that’s not my place.’”

Her husband, Robert, also saw the smoke and was making the painfully slow tractor drive back to the barn. Their daughter, Jasmine, and son-in-law, Cole, were just down the road sitting down to supper when they got the phone call summoning them back to the farm.

Cole says they all arrived at about the same time to see the fire raging and yet the scene was eerily quiet. No bawling cows. “It just sounded like a big bonfire,” Cole recalls. The cattle inside were silent and already dead — save one animal that broke free and found an open door.

The electrical fire at Acredale Farms on May 20, 2021 changed their lives. But the fifth-generation farm family counts its blessings. A rare easterly wind kept the heat and flames away from the calf hutches, a heifer barn, and house. They saved about 35 younger animals — a core group that represent most of the genetic lineage of the Acredale herd. Those survivors are being kept at the neighbouring Schelling family farm.

“The community has been amazing,” Janet marvels, rhyming off support that began on the night of the fire, including a huge truckload of food that simply arrived. “I think people thought we had to feed the fire department.”

The night of the fire coincided with the birth of Janet’s new granddaughter, Lyla, born to Janet’s son Travis and his wife, Madi. Ironically, Travis is a professional firefighter and would have been there if the fire were any other day.

“Looking back it’s kind of funny,” Cole says, remembering the phone calls. “We would get congratulations and then five minutes later, ‘I’m so sorry.’”

They were fortunate to have adequate insurance, Janet says, although there are always surprises. In retrospect, she would have placed a higher insured value on the farm’s three silos — two blue Harvestore units and a concrete silo. 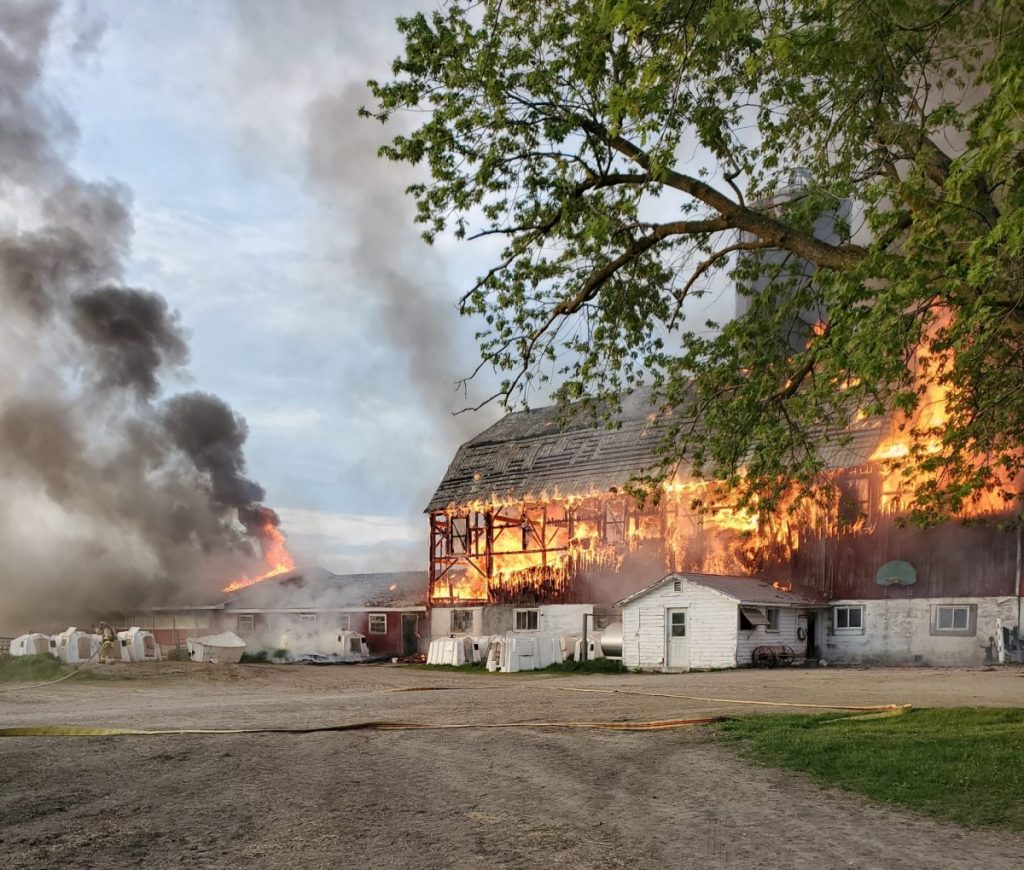 The fire at Acredale Farms on May 20, 2021 changed their lives

“The demo cost of the concrete silo to me was shocking,” she says. “I had put $5,000 on it, but the first quote to take it down was $40,000,” she says. Likewise, she had the replacement value of one blue silo pegged at $100,000 but discovered a new one would actually cost $288,000 with unloader. Instead, with the help of Ottawa Valley Harvestore, they made one useful blue silo — for high moisture corn — by largely combining surviving parts out of the two units.

In the aftermath, the disposal of the cattle carcasses was an immediate concern. They had ministry approval for on-farm disposal, but that option required digging more than a dozen holes to comply with a 10-carcass limit at each grave. They opted for waste disposal, which sent the carcasses to a Moose Creek waste processing site.

Cole says the Dairy Farmers of Ontario grants farmers recovering from fire an absolute maximum two years plus-90 days to be back in operation. In the meantime, the farm is also responsible for filling its milk quota. Farmers are allowed to pick as many as five other farms to temporarily produce their milk and share that portion of the milk cheque with the quota owner.

Acredale’s quota is being filled by three farms in Carleton County, as Janet wanted the quota to stay in the county. With plenty of Ontario dairy farms chomping at the bit to increase production, there’s no trouble finding quota-filling volunteers. Once word gets out about a fire, “they call you,” she says.

Janet and Jasmine have found continued solace helping out milking the surviving Acredale animals at the neighbour’s place.

Jasmine began working as a relief milker at other farms during this time of transition, while Janet took a temporary office job. Cole has taken up auctioneering and antique sales and Robert has been volunteering more at their local church.

Janet says they took the necessary time to grieve their loss and didn’t complete their planting last year. They only broke ground on their new barn one year after the fire, after visiting many farms for ideas. It was hard at first as tears flowed on their first few visits, she says.

Workers with Gary Nyentap construction toil on the family’s new, 45,000-square foot barn. Just a few months away from completion, the building is an ultra-modern replacement. “Now we’re getting excited,” Jane Acres said, recalling the months of gloom. ‘It takes a lot longer to heal the heart than you realize.”

The revived Acredale operation will be a substantial additional investment beyond their insurance settlement, which covered about 75 percent of the cost of the new barn, Cole said. 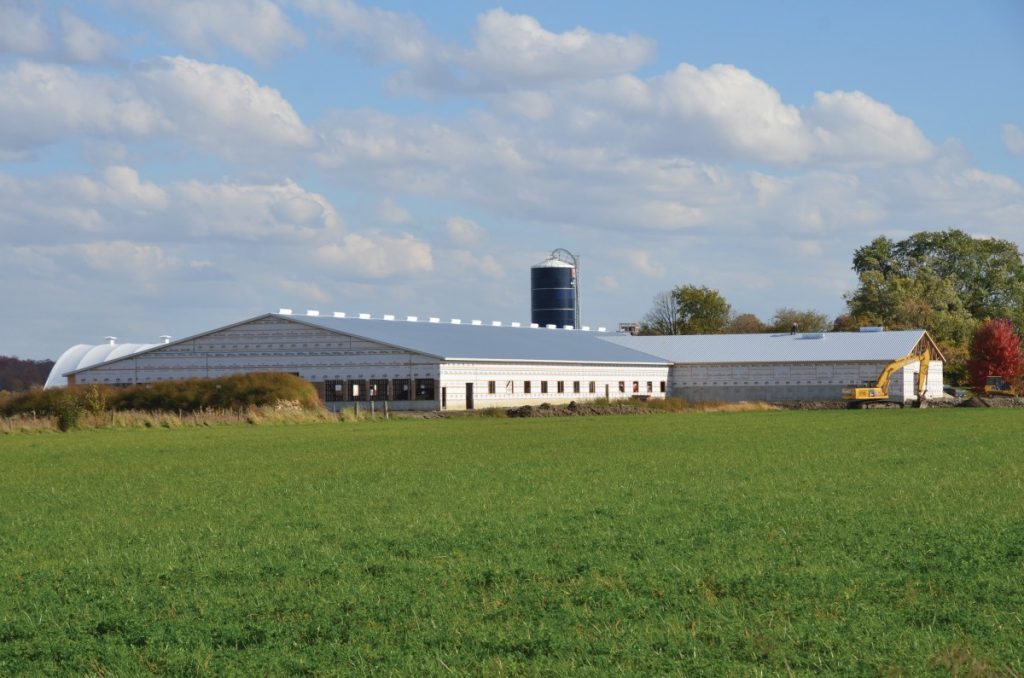 The ultra-modern 45,000-square foot barn is on schedule to be completed in a few months. The owners plan to host an open-barn event in 2023. (Nelson Zandbergen photo)

In addition, they’ve constructed a new bunk silo to hold the corn silage and haylage previously contained by the demolished concrete silo and a previous blue silo. This year’s haylage has gone into ag bags because the bunker wasn’t up in time.

The new barn is a four-row, centre-alley free-stall configuration with a double-eight milking parlour to house a milking herd of 100.  They were never keen on robotic milking, although Jasmine was quite familiar with the technology during her time at Kemptville College. “I like milking cows,” she explains.

They’re sticking with tunnel ventilation, rather than turkey curtains. Glass windows will fill the walls along the sides of the barn. Janet says they tried turkey curtains on their last expansion but found ventilation lacking in the summer. She’s noticed that many of the new barns with turkey curtains end up adding many more overhead fans anyways.

2020 was Acredale’s 100th anniversary year but the pandemic — and then the fire — kiboshed any public celebrations. They will celebrate — finally —  at an open-barn event in 2023.