THE INTERVIEW: Outstanding young farmers of the year 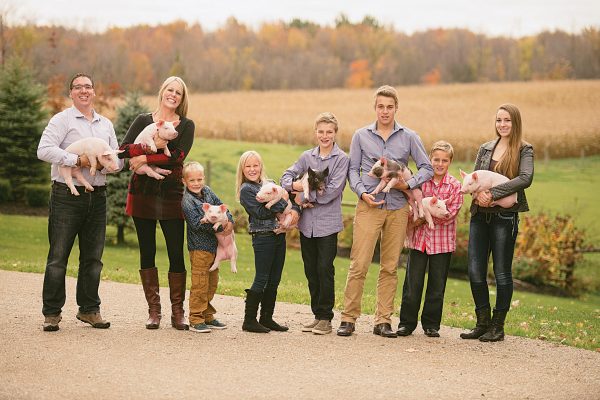 HURON COUNTY — When Amy Cronin, 39, and her husband, Mike, 41, bought their first hog farm together in 1998, it coincided with the worst year for the Canadian hog industry since the 1930s and forced a lot of farmers to leave the industry. The Cronins hung on and have since expanded into the United States.

Their original 1,800 sow farrow-to-wean operation at Bluevale in Huron County has grown to 3,600 sows. They bought a second hog farm at nearby Seaforth, and now own three hog farms in the United States. They own  a finishing farm in Iowa, and a genetic multiplier farm  with 1,700 sows as well as a new 6,000 sow farm with an innovative crate-free system. Both are in Missouri.

In March, the Cronins were named Ontario’s outstanding young farmers, an award given annually to farm individuals or couples between the ages of 18 to 39.

Amy Cronin, who is also chair of Ontario Pork, spoke to Farmers Forum about the award and their farm.

You both grew up on dairy farms. Why did you choose the hog industry?

There wasn’t an opportunity for us to take over our family farms. The price of quota was prohibitive. We knew there was an ability to get into hogs because you didn’t have to have the quota to get in and it seemed like a growing industry.

Was there any one thing that attracted you to hogs over a different industry?

It seemed at the time like the industry could offer us the highest chance of success.

While some farmers sold the farm or moved into other industries when times got tough, why did you stick with hogs?

We still see a lot of potential in the hog industry. We just know to be successful in this industry, you have to embrace change. You have to be able to look at things differently from the norm. When things become difficult, we just look at different ways to solve the problem and go with that.

What gave you the idea to expand into the United States and buy a farm?

We initially did it because we had to. We were producing pigs that we didn’t have a home for. That was the problem. The solution was the pigs that were being sold out of Ontario were going into Iowa and there was an opportunity. From there, we saw all kinds of opportunity to grow our business and figure out our own way to operate in the U.S.

How hard is it to manage a farm when you’re not there?

It definitely takes a different management style. But we count on our team members and we have amazing technology we can use. A lot of our conversations happen by phone rather than in person, and it means that we utilize things like iPads to do barn walkthroughs rather than being there ourselves. But it also means we have to travel more than the average person so we can be down there to foster those relationships.

What’s the most difficult thing?

The most challenging thing has always been financing. We can’t use the equity we have in Canada because U.S. banks are worried about being able to access that collateral. Our Canadian banks don’t want to finance us for the U.S. because it’s money going across the border and they can’t access the collateral down there.

How did you get financing?

When we started sows in 2010, it was a significant expansion for us. It was the biggest expansion we had ever done. Financing was a challenge. At that time, we knew that there was a need for early-weaned pigs in the U.S., so through a third party, we set up a contract that allowed us to speak to producers who were in need of early-weaned pigs, to talk about who we were, to talk about our family, to talk about our vision and our mission and our core values so they could understand us. They agreed to put upfront $10 per pig they would purchase the first year into an account that we could then use as collateral so we could access financing.

What is the best innovation you’ve adopted in the last five years?

In Canada, we built a truck wash and a biocontainment unit on the farm. We have PEDV that entered our province in early 2014. We knew that was a risk to our sow herd, so we built a truck wash on our farm.  At the same time, we built a biocontainment and disposal centre. All the shavings that come out of the truck wash go into a biovator and all our deadstock go into a biovator and it is mixed with the shavings and all of the discarded waste that comes from the truck wash. Out the other end comes compost that is sterile.

We just built a crate-free system in Missouri. It’s a really innovative facility that incorporates technology from around the world. It’s all group housing, it’s got electronic sow feeders, and it’s equipped with cameras so our customers can see what’s happening inside the barn. Our sows come into our farrowing room, and they farrow with the protection of the crates to protect the piglets. Within two to five days, we open up that crate so the sow has the ability to turn around and move around.

Why did you choose to offer the video?

Transparency. It shows our customer we’re confident in our operating procedures on farm. It shows we’re not trying to hide anything. And it gives them confidence as well in what we’re doing.

Why do you think you and Mike were named outstanding young farmers?

We’ve been able to mitigate risks in an industry that can be challenging. We’ve been able to access some marketing opportunities that have allowed us to continue to grow our business, that have given us stability and predictability in a business that doesn’t always have that.