BREAKING NEWS
13:48
Home News Featured News The families and cows behind the shields

The families and cows behind the shields 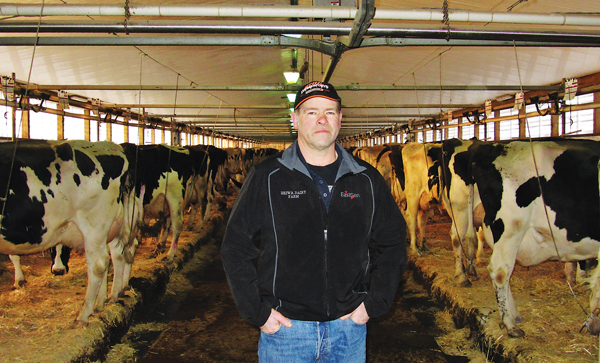 By Brandy Harrison and Tom Collins

Canada-wide, 21 farms, including 12 in Ontario, scored the honour, awarded annually by Holstein Canada to recognize the best ratios for high-ranking breeding cows in production, conformation, reproduction, health, and longevity.

Here is the breeding philosophy and classification scores behind the six new Master Breeders shields in Eastern Ontario.

Breeding strategy: “I like to have a good-looking, hard-working cow. Im not really a show breeder or a type breeder. The milk cheque pays the bills, so Im looking for good production. I dont look for size. As long as you have a good udder and good legs so a cow lasts a good time, thats very important to me. Its more important to one day have a cow in the barn who will last for a long time and help me pay the bills.”

How they got their start: The Van Ahs immigrated to Ontario from Switzerland in 1993. “There were cows that came with the farm when I bought it. I think the problem was on the farm. It was not a bad herd but poor management. I took over 92 cows, but now I have at least three times more quota and almost the same number of cows.”

Master Breeder: Signature Holsteins, milking 50 to 55 cows, owned by Michael Farlinger, 47, and his wife, Thea, his daughter, Emma, and his stepson, Todd Edwards, of Morrisburg, in the United Counties of Stormont, Dundas, and Glengarry

Breeding strategy: “Were very type conscious. That said, we also realize production pays the bills. Its a balance. Were fortunate in the Holstein breed right now, with the influence of Goldwyn and his sons, that there are a number high-type, good production sires available,” says Farlinger. “Its a Canadian-type cow, a strong-frame cow with a good or great udder, feet, and legs, that can consume large amounts of forage and produce lots of milk.”

Breeding highlight: Signature has bred balanced cows that have competed and won at the World Dairy Expo in Madison, Wis., the Royal Agricultural Fair in Toronto, and the Eastern Ontario-Western Quebec Championship Show, such as Signature Jasper Kat, which was nominated all-Canadian in 2010.

The shield is a reward for what they do in the barn every day: try to breed better cattle, says Farlinger.

“Weve bred a herd of cows that were proud of and enjoy working with every day, and weve been among the top production herds in the county for the last four or five years.”

Breeding strategy: “I go with cows I enjoy working with. I like a nice type cow and a cow that is going to stay with me for a while. The whole package: They have to look good and work well and be fairly easy to get along with because I have to milk them every day. When I go to the barn, I might as well look at good cows and thats what I try to breed for.”

The cows behind the shield: “I only really have two lines of cows. When my dad bought his first cow, it was a dam and daughter and so all the cows he got from them were all from basically one cow. Then we got one cow from Brians dad, and so there really are only two lines of cows because we never brought cows in. It was a closed herd.”

Renfrew County farmers have a jewel and a hottie

Breeding strategy: “We breed for type and try to get as much milk as we can,” says Barry, who favours functional type over a showing animal.

The cows behind the shield: The strength of the Goulds herd rests on the lineage of four cows: P. Jewels, Hot Red  Hottie for short, the first cow Jason and Scott ever bought  Piata, and Leona, bought as Scotts 4-H project at the Ottawa Valley Farm Show in 2001.

All four still have daughters and granddaughters on the farm and 12-year-old Hottie is still going strong: she was recently flushed at LAlliance Boviteq Inc. in Saint-Hyacinthe, Que. Theyve always had their eye on a Master Breeder shield, says Jason.

“We just dont want to milk normal cows. I dont want to wake up every morning and milk plain cows. Were always talking to people, visiting farms, and searching the Internet for new bulls, feed products, or ideas to improve our barn or herd health to get us to the next level.”

Breeding strategy: “As long as I can remember I wanted to breed my own cows. Thats why they all go back to one old cow. I am more interested in seeing what I can do with one family,” says McGriskin. “Weve always focused on type  feet, legs, and udders  and feed for production. We never paid too much attention to production numbers on bulls.”

How they got their start: His father, an avid cow man and A.I. technician, died when McGriskin was only 13. The next year, he started milking cows for Ron and Gord Bolton, staying for seven and a half years before getting married and establishing their own prefix, scooping up Nassau Hills Rockman Fern A and some of her offspring to build the herd.

“She was almost 11 years old when I bought her. I just had my mind set that she was a good old cow,” says McGriskin.

When the banks said no, they relied on private money and their community to start milking, such as Sheila McConkey, who they rented from for nearly 14 years.

“We had no money. People would sell us corn, hay, or a cow and give us time to pay for it. A lot of people had a small hand, and some people had a big hand, in helping us out.”

Ferme Lavigne Inc., milking 105 cows, owned by Jean-Pierre Lavigne, 36, and his father, Alain, 65, of Ste. Anne de Prescott, in the United Counties of Prescott and Russell

Breeding strategy: “By now, we really look a lot for the health traits. I never breed for a show cow. I dont take those bulls. We breed more for functionality. I dont really like the big, huge cow that is not giving milk, or has health problems. I really like the medium cow that works hard.”

The cows behind the shield: “My father bought a few cows 20 years ago from a very good herd, and its those cows that made the herd. We havent bought cows for 20 years. We bought two or three lines of cows, and we built the herd based on that.”