The dairy genius of Jamie and Petra Black 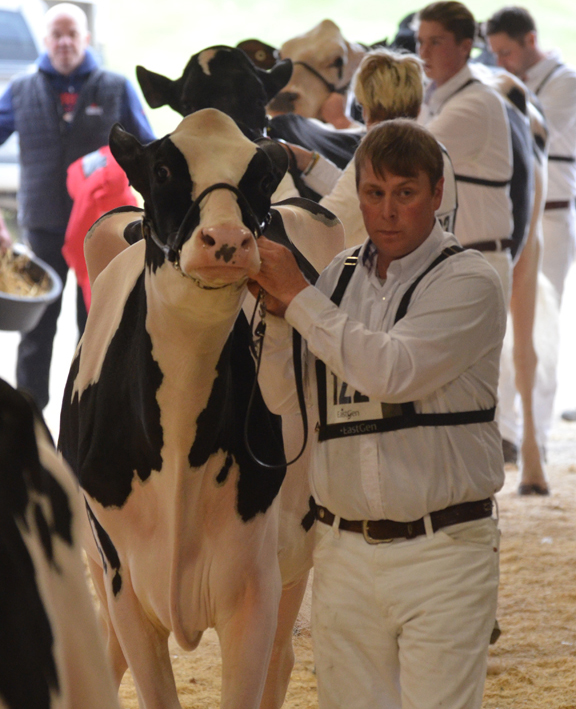 It takes incredible skill to be competitive in the upper echelons of today’s dairy show environment, where big dollars now gobble up the best cows, no matter the money, no matter the breed, no matter where they are from.

Jamie Black and Petra (nee Meier),  were two Eastern Ontario youths, now married and located in northern New York; they have repeatedly demonstrated that skill and so much more.
Petra as an extraordinary dairy cow vet with her own clinic and several others working for her. Jamie as head of Semex sales for New York and New England.

Where they get the time to care for and develop the great animals they do, in their tie-stall barn, has to come from 18- to 20-hour days. With both serving dairy clients milking 1,000 to 2,500 cows, plus countless smaller herds, the work they do with these special animals has to be before 5 a.m. and after 8 p.m.

They both learned the value of work as children, here in Eastern Ontario.

Petra left Chesterville more than 15 years ago when her family moved to Franklin County, N.Y., to dairy.

Jamie’s father, the long-time herdsman at Kemptville College, never held back his son from learning the quality dairy cow show world under the tutelage of cow man Cameron MacGregor, now in charge of the Semex bulls at Kemptville and Brockville.

Now Jamie and Petra have teamed up; knowing the players in both nations. The great calves, heifers and cows of all breeds that they’ve bred, owned, co-owned, marketed and handled at the shows, especially over the past five years, have been phenomenal.

A recent sale they put together of their animals averaged well over US $6,000 per head.

Done in that quiet, unassuming manner, their cow sense and honesty is their trademark, attracting the who’s who of the industry who realize their talent to bring an animal to the next level, plus their ability to spot a great one, whether a potential genomic pedigree or a show winner.

The headlines from this fall’s show season either side of the border will be the three-breed grand champions owned by MilkSource Genetics from Wisconsin at World Dairy Expo in Madison, plus the two grand champions and one honourable mention at the Royal.

MilkSource milks on six different farms, with operations in six states and 25 counties and scoops up great cows with a vengeance. Joining them at the practice and at the top of a lot of classes are Connecticut’s Arethusa Farms, backed by a fortune in producing ladies’ shoes, which paid $267,000 for a Stormont County-bred Jersey this spring, and won intermediate champion at World Dairy Expo.

However, the winning milking Jersey yearling at the Royal and second at Madison, owned by MilkSource, was purchased this fall from Jamie and Petra. They know when to buy, but treating it like a business, they also know when to market and where that market is.

They can look in the eyes of a multi-millionaire wanting to buy one of their animals, or a young lad with only a few dollars in his jeans, struggling to learn the ropes, and treat both with equal respect and courtesy. They have deep, enduring friendships with both.

Jamie and Petra’s Holsteins and Jerseys, owned and co-owned, were in the top two or three in Madison and the Royal. They also had a grand champion at Harrisburg this year. Jamie also judged some major shows in Ontario, Quebec and several U.S. states.

Exhibitors know what they are going to get: A completely honest, unbiased placement, with a special emphasis on feet and legs.

Jamie has a breathtaking cow memory. I mentioned an Ayrshire I had shown at the Royal and won second with two decades ago: He named her, and described her in such detail, “a real dairy cow before her time.”  And Jamie was a young teenager at the time.

Neither Jamie nor Petra want publicity. I wanted to do a sit-down feature this summer of their incredible accomplishments, but both are genuinely humble and wanted to let the cows talk for them.

Perhaps they can excuse us in Eastern Ontario and our pardonable pride, for saying, “well done.”