MOOREFIELD — A teenaged boy was airlifted to hospital after his leg was crushed Oct. 29 at a Mapleton Township dairy farm, north of Kitchener in Wellington County, local firefighters say.

The teen was operating a skid steer loader near the concrete wall of a manure pit at the Martin Dairy at the time of the accident, according to Mapleton Fire Chief Rick Richardson.

Richardson said the 15-year-old boy was driving the machine near an opening in the wall at the back of the manure pit when the skid steer pitched forward and came to rest against the pit wall. The teen’s leg was “pinched” between the concrete wall and the machine, the chief said. 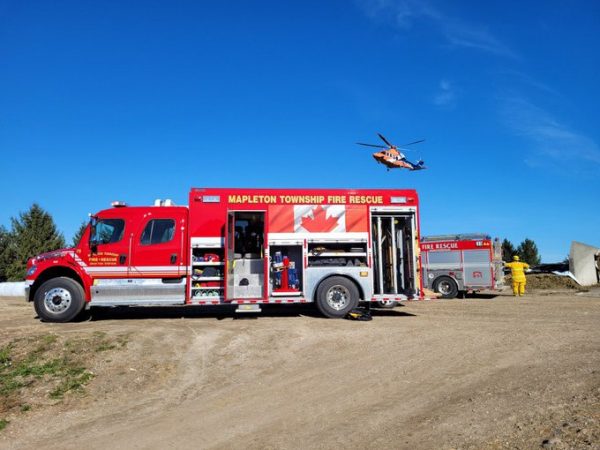 Local firefighters responded to the incident on Wellington Road 12 shortly after 10:35 a.m.

Richardson said firefighters used the department’s airbag equipment, combined with another farm loader, to move the skid steer and free the driver. It took firefighters about 30 minutes to pull him from the cab after cutting through the skid steer enclosure’s wire safety mesh.

“By the time the air ambulance got there, we had him out,” Richardson said, declining to discuss the extent of the leg injury.

The teenager is a neighbour and relative of the farm owner and part of an extended Mennonite family who help each other out, he said.