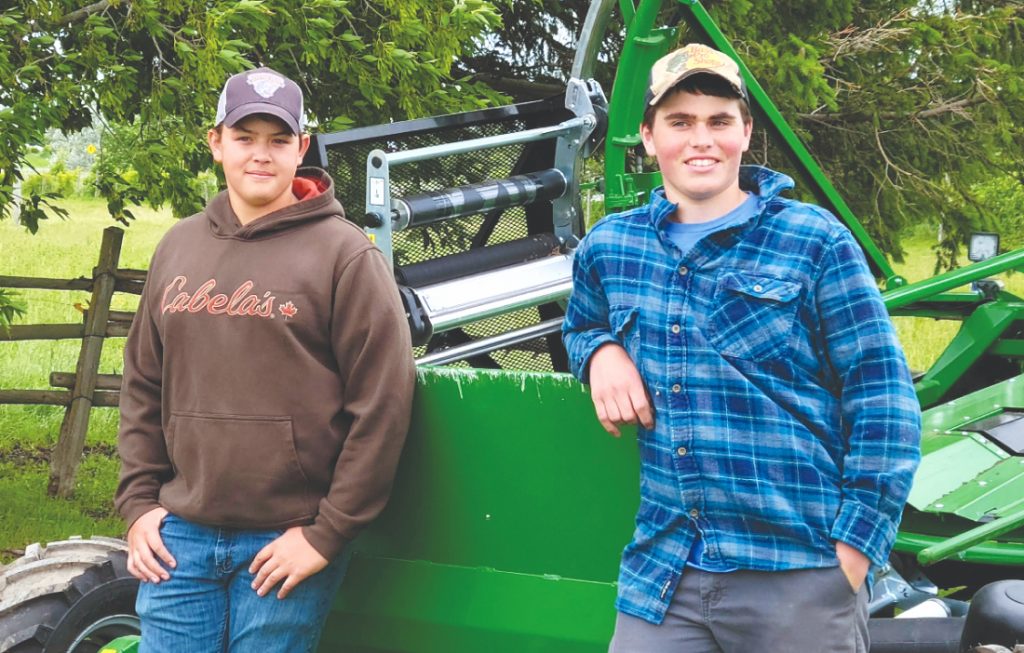 Bobbie Robinson, 16, and Connor Armstrong, 15, are both headed to Grade 11 at Avonmore’s Tagwi Secondary School this fall. But they’ve got a busy summer ahead of them in the meantime: Earlier this year, they independently applied to Ontario’s student summer company program and successfully landed the maximum grant of $3,000 apiece on separate small businesses.

Robinson resides at his parents dairy farm — Payneside Farms — outside Finch, while Armstrong is a resident of nearby Crysler. Both young men participate in 4-H and show cattle from the Jersey herd at Payneside as part of the Stormont County club’s activities.

Robinson has dubbed his enterprise ‘Baler Bob Custom Work.’ It’s an offshoot of his parents’ longstanding custom haying business, which he’s worked at since he was 10.

He says the idea of launching his own related venture arose when the farm bought a second in-line bale wrapper last fall. “I saw the potential to rent the old one off my parents, and have my own sideline work, and to learn business skills,” he says.

Tube-wrapping clients’ round or square bales is his specialty. He feeds the self-propelled wrapper with either the customer’s loader or a John Deere loader rented from his home farm. He also offers a baling service, using a tractor and round baler supplied by Payneside. He pays for his own fuel, writes his own cheques and charges rates he says are competitive.

“It’s been busy,” Robinson says, adding he was out wrapping until 2 a.m. the previous evening. Robinson says he is open for business 24 hours a day. Moist conditions in the late spring have helped drum up business this year “because lots of people want to wrap hay.”

He has eight clients so far, most of them dairy farmers, along with some beef farmers. He drives and hauls the necessary equipment to places like Russell, Dunvegan, Williamsburg and points in between.

Robinson also works at equipment maintenance and barn chores at the family farm where he grew up. He sees Baler Bob Custom Work as the start of an expanded foray into custom work, and preparation for the day when Payneside supports both himself and his 19-year-old brother, Dougie. “If we both want to come back to the farm, there’s got to be a source of income for other people. So if I could farm, and do a little bit of custom work on the side, that’s my goal.”

Grandson of crop and Alpaca farmers, 15-year-old Connor Armstrong says he was looking into small business ideas last fall and noticed a demand for stump-grinding services. He bought a $6,000 walk-behind 20-hp. stump grinder with his own money last fall, and he’s been testing the unit on dead elm and ash stumps at his parents’ rural property. “It’s quite the workout. It weighs like 400 lb.” says Armstrong, who has about half a dozen customers lined up this summer so far.

The services offered by Armstrong Stump Grinding and Hedge Removal include grinding down stumps, then filling the remaining holes, as well as cutting down overgrown hedges with a chainsaw.

He estimates the charge to grind down a foot to foot-and-a-half stump at $50 to $75. The machine can handle larger sizes as well, he adds. He expects to charge “around $50/hr” to take down hedges.

Armstrong says he first learned of the Summer Company program through a guidance counsellor at his high school. His father drives him to job sites.