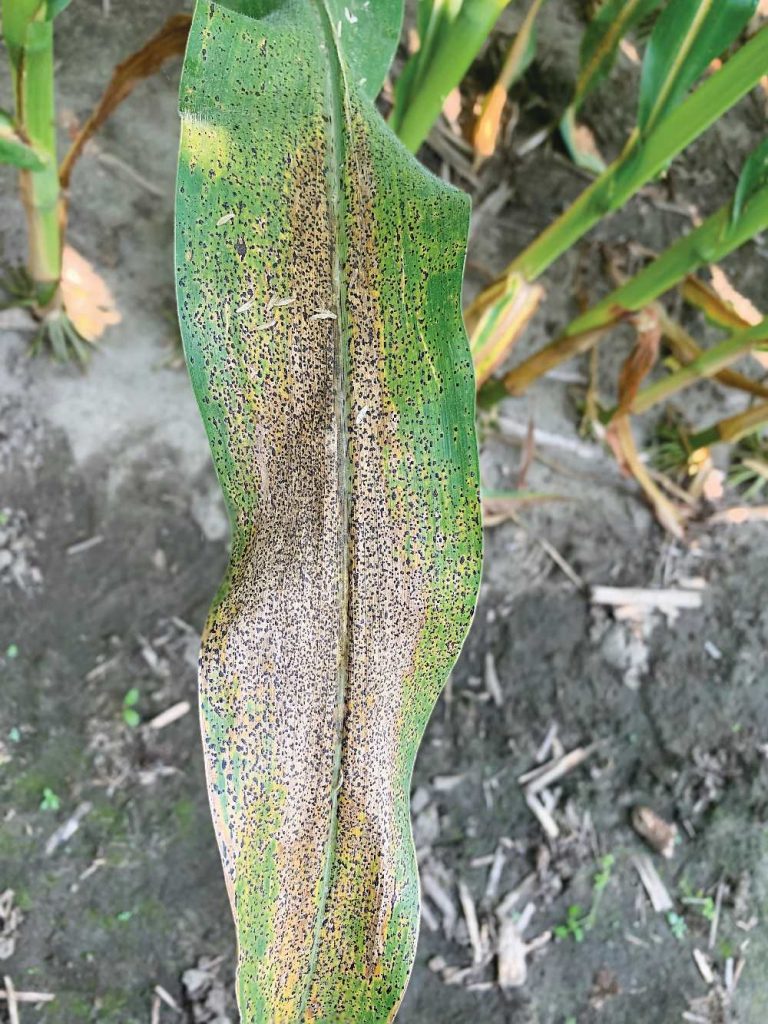 Tar spot on a corn leaf.

If not treated, disease can reduce yield by up to 70 bushels per acre

Those black spots on your corn leaves might well be tar spot, a relatively new disease that is rapidly spreading.

Tar spot is caused by the fungus Phyllachora maydis. It appears as small, raised, black dots on the upper and lower surfaces of corn leaves. Sometimes these lesions develop halos around them and have a fisheye shape. Severe cases include spots on husks and leaf sheaths.

The lesions are often confused with pollen, dirt, aphids, or insect frass. Tar spot can’t be rubbed off. The disease causes an average of 10 to 50 per cent yield loss in grain and silage corn.

Tar spot was first identified in Illinois and Indiana in 2015. The airborne disease spread to Michigan, crossing the border into Ontario last year. In late September of 2020, tar spot was identified in Canada for the first time in Ridgetown. Since then, it has been found in Essex, Lambton, Elgin, and Middlesex counties.

“It’s continued to develop quite rapidly. Overall, incidents are increasing. You can go into fields and 40 to 50 percent of the plants have some tar spot on there,” explained Albert Tenuta, field crop extension plant pathologist with the Ontario Ministry of Agriculture, Food and Rural Affairs.

Tenuta is a member of the U.S. tar spot working group and says he’s noticed overwintering of the pathogen causing tar spot on infested corn residue in soil. Based on what was seen in the U.S. Midwest, he knew the disease would probably survive the harsh winter here as well.

“The disease is what we call a polycyclic, it goes through quick cycles every 10-14 days and it can build up quite quickly. By doing so, the more lesions you have, the tar spots start to kill the leaf. Now we’re starting to see leaves that are yellow, starting to turn brown and dying off. And that’s the primary concern,” Tenuta said.

Seeing tar spot in the lower leaves isn’t as bad because those leaves will be sacrificed anyway, says Tenuta. But seeing tar spot on upper leaves, especially on ear leaves, isn’t good. The ear leaf is the largest and most important leaf on the plant because it collects most of the sunlight for photosynthesis, so the sugars produced there move into the developing cob. Tar spot on the ear leaf reduces the photosynthetic ability of the plant.

“In the early cases we saw, it started from the lower leaves and worked its way up. Now what you’re seeing is mostly from the ear leaf and above, as those spores land,” Tenuta said.

Ontario has been experiencing ideal conditions for tar spot recently: frequent rains, prolonged wetness, and high humidity. Temperature is a factor as well. Tar spot likes moderate warmth, but it can survive a large range of temperatures.

“The fungicides that are available in Ontario are very effective against tar spot, the majority of them,” Tenuta stated.

Crop rotation can help reduce the spread of the disease, but if there’s lots of spore production early on in the season, it won’t help much.

“The good news is that severity is still low, but it is a disease that is of concern and we need to keep an eye on it. It can develop very quickly, it can double every 10 days,” Tenuta said. “In 2018 in the U.S. when the disease started to show very early in July, it resulted in losses as high as 60-70 bushels (per acre).”

The appearance of tar spot is currently being tracked with Corn ipmPIPE, where confirmed cases are highlighted on a map to alert growers and producers: https://corn.ipmpipe.org/tarspot/. A new app called Tarspotter uses research-based models to predict the risk of tar spot in a field and the best time for treatment.

“We will continue with our research trials so that we can develop an integrated tar spot regional approach to managing it for Ontario producers. At the same time, we’re training and educating growers as well as industry reps in terms of identifying it and getting more and more people out there to scout for it,” Tenuta said. “We’ve still got lots to learn about this disease. It’s new.”