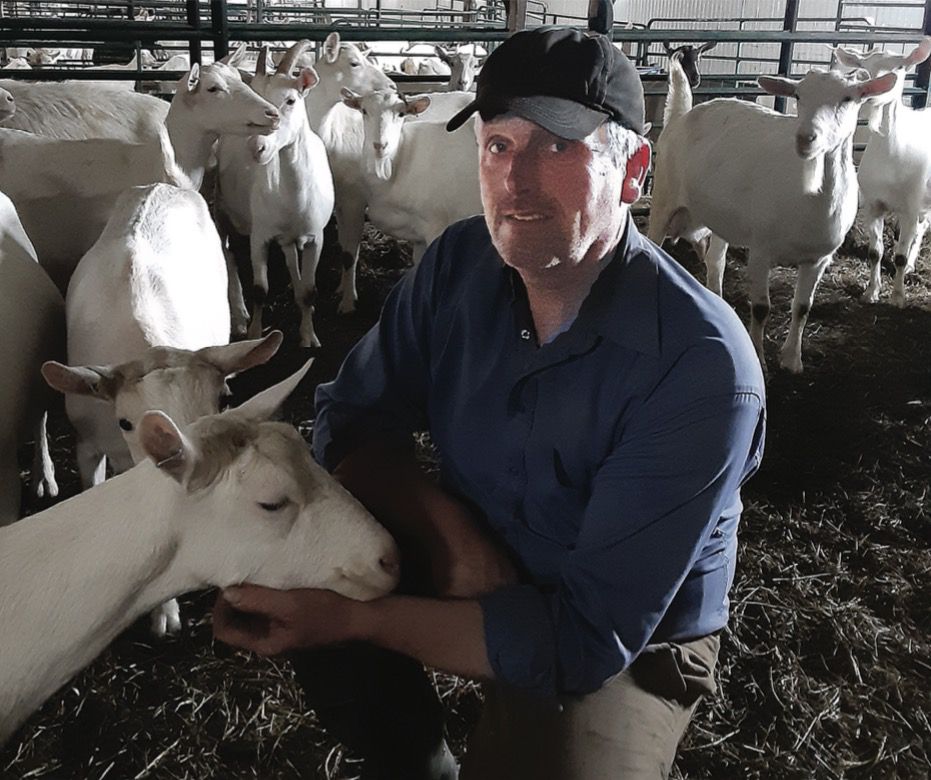 Jack Bakker is a cow dairy producer who introduced dairy goats to the farm last year.

When the province shut down last year to combat COVID-19 it seemed that almost overnight demand for Ontario’s goat milk began to dry up.

“Between April and May 2020, nearly 40 per cent of demand was shut,” said Hugh Rice, general manager of the On- tario Dairy Goat Co-operative which represents 110 of the province’s about 260 producers. “We had to pivot.”

As more and more consumers started grocery shopping and spending more time in their own kitchens, independent grocers and major retailers picked up the slack in demand.

“By the end of 2020 the retail cheese side more than made up for all the volume we lost and even provided us with a bit of growth,” Rice said. “Everyone really deserves a pat on the back.”

However, Rice is noticing a plateau in demand for goat milk products now and suspects a slow and steady decline in the retail space going forward. As more dairies get back up and running, producers are hopeful that hotels and restaurants will be fully open soon.

“We expect the food industry to come back and provide us with even more growth,” said Rice. “But at this point you are getting into the psychology of people and whether or not they are going to go back into restaurants and hotels.”

Before the pandemic, Ontario’s goat dairy industry was growing steadily. Over the past decade the number of goat dairy producers hovered between 200 and 300 operators across the province.

The total volume of production in the province grew 60 per cent since 2010, representing 86 per cent of total volume across the country. Ontario now represents three-quarters of all goat dairy producers in Canada.

On top of improved production practices, producers are benefiting from evolving and diverse consumer tastes along with changes to Canada’s ethnocultural diversity.

Jack Bakker, a cow and goat dairy operator from New Liskeard, believes immigration is opening Canadians’ eyes to goat milk products. “When we start eating it we actually really like it,” Bakker said.

On average, goat dairy operators are also 12.5 years younger than their counterparts, adding to the industry’s growth potential.

Bakker, who started raising dairy goats with his son last year, says lower costs make the industry intriguing to young farmers looking to set up their own operations. You need a licence to milk but you don’t have to shell out the big bucks for milk quota.

“There is a reason why our second barn is a goat barn and not a cow barn,” Bakker said. “In the cow industry, the amount of money I put into the goat barn wouldn’t even come close to setting up a viable operation.”

Younger farmers may be getting into goats because cow dairy production is already so established and finding new markets can be difficult. “Goat dairy is still in its infancy,” said Bakker. “When you are a unique industry there is still room to grow. With the (cow) dairy industry there isn’t anything new under the sun.”

The goat sector is not without its growing pains.

Suffering from over-expansion in 2017 and 2018, supply by far outgrew demand across North America, meaning processors had more milk than they could handle.

According to René Zoller, chair of the Ontario Dairy Goat Co-operative, they had to reduce supply among their members by 20 per cent, frustrating producers. The industry only started to stabilize again in 2020.

For Bakker, that instability is a concern.

In spite of the challenges of 2017 and the pandemic, Zoller is content with where the industry is at the moment, and he believes the members of the co-op are pleased as well.

“If you would have asked me two or three years ago, I wouldn’t have been that optimistic,” said Zoller. “I am pretty optimistic now.”