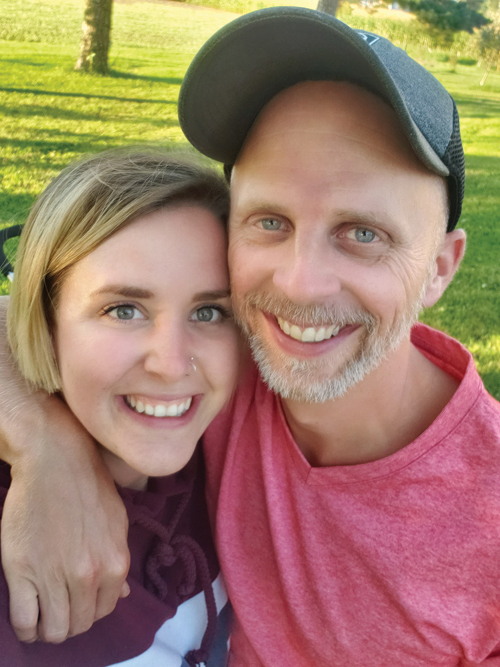 They barely made it and they’re so excited, they’re expanding

CHESTERVILLE — A series of unfortunate events, including the abrupt end of my tenure at a bankrupt community newspaper and the arrival of COVID-19, removed all hesitation from our plans to make a living from our 21-acre historic farm at Chesterville. To be truthful, this was really my wife’s idea.

After getting married and having our first child, we moved to Gar-Eden Farms in 2017. I grew up on a nearby 325-acre dairy farm on County Road 7 and was well versed in what a real farm lifestyle entailed. However, after more than two decades away from Dundas County, working in radio and television broadcasting, things had changed dramatically.

So when it came time for us to make a plan for how we would make a living off a relatively small patch of land, we knew very well what we couldn’t, or didn’t want to do. We made a list, dreamed a little, made a few plans, dreamed a little more and researched a lot and eventually found permaculture: nature-driven, no inputs.

We already had several gardens close to the house and were well set up, even for the average gardener. To get there, we tried almost every trick in the book. We used rain barrels for watering, cardboard boxes as landscape paper to build our plots, homemade compost bins made from old pallets and we even built a greenhouse out of old windows we found on the property. Some ideas worked out. Others should have been left on the page when we read them. Pallet wood is hardwood. Don’t do it.

In the spring of 2020, we found ourselves seeding an unusually large number of veggies in trays after deciding that having a family food plot would be prudent in such unstable times. The living room, bathroom, bedrooms and any other room with a large window was taken over by shelves and seeding trays.

At the same time, with more time on their hands, people became interested in gardening again. We were overwhelmed by the genuine interest in growing food and the reconnecting with the land.

We quickly seeded and sold as many veggies as we could .A few times it was at the cost of our own garden as our enthusiasm swept over us like a tidal wave. We went a whole year without a single pepper plant. All marketing was on social media, including Facebook. There wasn’t even a sign at the farmgate.

Our enthusiasm far outweighed our knowledge and our new 8,000 sq. ft. garden (planted in a former corn field) became an immersive school, with many painful lessons. Bugs, weeds, disease, drought, nutrient deficiencies and more bugs. They came in droves. Each problem sent us scurrying to the internet, books and other references to identify the problem and a potential solution. The only defence against cucumber beetles are row covers. End of story.

With two children under three years of age and four different gardens to manage, we had our hands full. However, my wife decided it was time to accelerate a few of her plans. We added five goats (one of which we are still milking and two others are due any day now), two pigs, three dozen laying hens and 50 chickens for meat.

While digging fence post holes by hand in an old manure pit filled with stone and concrete during a deadly heat wave I did question my sanity. Pushing buttons on a radio control board sounded awfully good right about then.
It was busy. We tackled each day by trying to prioritize what needed the most attention. There was no plan. We simply went ahead and held on for dear life. Some days were brilliant. Others, could make you cry. The ill-fated Christmas tree plantation ended up rather crispy with the lack of rain.

When it was all said and done, we had filled our freezer and storage shelves with food that we had grown with our very own hands. We learned new skills. My wife learned to make cheese, which is unbelievable by the way.

We made thousands of mistakes but we feel fulfilled. That was what will keep us coming back for more — the endless learning and challenge to keep up with the complexity of nature. And we paid all of our bills.

My wife has two part-time jobs that she won’t need in three years. With 2021 before us, we are diversifying further. We certainly didn’t get rich nor do we ever expect to, but we discovered that we had come home.