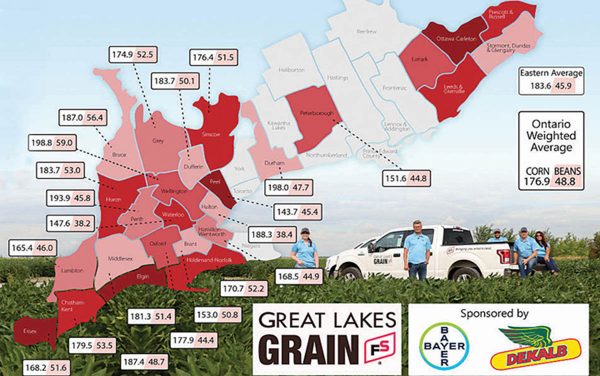 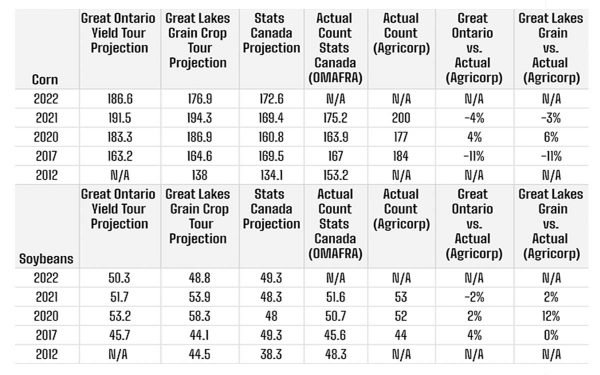 EASTERN ONTARIO —  Ontario’s two most popular crop assessment tours are both projecting strong corn and soybean yields this season— but nothing like a record in either commodity. Statistics Canada also sees it the same way.

Great Lakes Grain also projects that the far eastern end of the province — an area from Lanark, Leeds and Grenville east to the Quebec border — will exceed the average, at 183 bu/ac for corn and 45.9 bu/ac for soybeans.

Meanwhile, Statistics Canada is calling for average soybean yields of 49.3 bu/ac and corn yields of 172.6 bu/ac in Ontario this year.

Glen Gordon Farms’ Duncan Ferguson agrees that “corn yields are going to be down a little from last year,” but not enough to concern the market. The Williamstown farmer and grain elevator operator noted that cooler conditions in June set the crops back slightly, especially the soybeans. “I’m comfortable with the crops,” Ferguson added.

“It’s hard to say until the combine actually rolls, but both crops look pretty good,” Andy Corput, of Chesterville, said of his 800 acres of corn and 525 acres of beans.