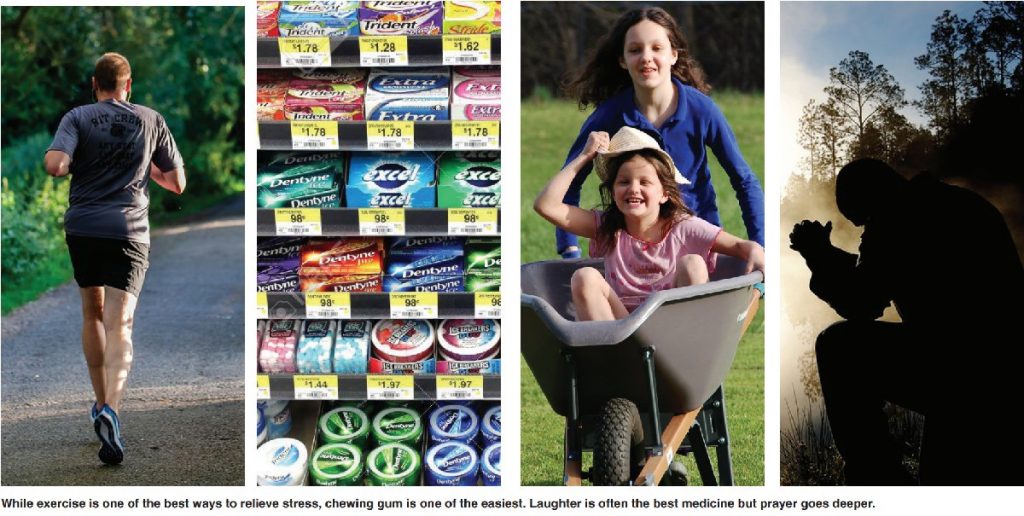 Harvest can be the most stressful time of the year and when some farmers need help coping with stress and depression. One way to know when the stress is too much is when one feels overwhelmed with all of the work. Some might find themselves not knowing where to start. Others might find themselves getting angry quickly or flying off the handle. Other symptoms can include wanting to avoid the day, avoid people or avoid conversation.

Farmers Forum has compiled a list from a plethora of sources, including the Mayo Clinic, of ways to cope with stress to get back on track when things are derailing.

1. Focus on the task at hand and stick to thinking about one task at a time.
2. Go jogging. Exercise is an amazing elixir. Exercise boosts energy and confidence.
3. Go for a walk with a spouse or good friend. Walk and talk it out, not once, but frequently. If you have no one to talk to, call a professional counsellor or therapist.
4. Go for coffee regularly with friends.
5. When you have to eat an elephant you do it in small bites. Break down your tasks into small jobs and keep a list. Check off a task as it is completed. Checking off is simple and gratifying.
6. Meditate or pray. There are online apps (such as Headspace and Calm) that offer guided meditations under two minutes to clear the mind.
7. Chew gum. One study suggests that chewing gum increases blood flow to the brain. Other studies say chewing gum doesn’t work for everyone.
8. Get more sleep. Sleep deprivation is a joy killer.
9. Eat healthy foods. Cut down on alcohol and cigarettes. Cut down on coffee. Drink water, lots of water, like soccer star Cristiano Ronaldo.
10. Laughter is great medicine. Watch a comedy or listen to your favourite comedian on Youtube.
11. Say ‘no’ to other people. You might want to help everyone but sometimes it can be at the expense of yourself and your family.
12. Do something else. Get away from the stress by keeping a journal, playing a musical instrument, reading a good book or gardening, painting, or taking up a sport.

While there are many techniques to handling stress there is one idea that is centuries-old but busy 21st-century minds seem to have forgotten: the power of prayer.

For those who need a reminder, prayer is simply talking and listening to God. It is a conversation, often in silence. Interestingly, studies show that everyone prays, even atheists.

Prayer has many benefits. Like meditation, prayer clears the mind. It calms one down. But it has a much higher purpose. It’s main aim is to connect with God. But it also inspires to give one direction for the day, for life even.

Mother Teresa heard the voice of God telling her to serve the poor. She didn’t hear God’s voice again for 50 years.

Sometimes one talks, God listens. Sometimes, one simply listens. Sometimes God answers prayer in clear ways. Answers come as inspirations, ideas that spring to mind at the moment or later on come from a spouse, a good friend or from something one is reading.

Most often, prayer helps one to find one’s centre, that stillpoint within oneself, around which one’s life ought to revolve. It is where one is, say, grounded, unmoved by emotion and where one can seemingly be closest to perceiving the purpose of life.

Sometimes prayer is a lively conversation and can take on an unusual form. There is a famous story of a woman of faith who spent months in a hospital where her husband was dying. She walks outside the hospital one day where she sees a statue of Jesus’s mother Mary. She is so angry that she begins picking up clumps of dirt and grass and flinging it at the statue. Security is called and comes running. So too does the hospital chaplain who stops the security officers and tells them to leave the woman alone because “she’s praying.”

As American Bishop Robert Barron notes: “I think that’s dead right. She was a woman of faith but she was expressing her anger and frustration. You think she is out of line but no, read the Psalms. It is filled with people angry and frustrated with God.”

Bishop Barron goes on: “Speak honestly with God about what is bothering you, about the messy side of life.”

Shout at God if you have to, He’s God. He can take it.

Sometimes prayer, for Christians, is the slow repetition of a short phrase like “Lord, have mercy on me a sinner” or ‘Jesus, I trust in you.”

We 21st century people are conditioned to be busy and noisy, jumping from one thing to another. From one phone message or tweet to a text message and a music podcast. We are trained to get things outside of ourselves but prayer is going to that silent place within oneself “and savouring the good,” Bishop Barron says. Sometimes prayer is finding that inner place while taking in the horizon at the beginning or end of a day.

Some people pray a lot and we often refer to them as saints. Why? They are cheerful people, focused people and they attract the people around them. “Be joyful always, pray continuously,” writes Saint Paul in his first letter to the Thessalonians. So, there is a direct connection between being joyful and being prayerful. Some saints were more often in prayer than not and it is said they came out of prayer when it was time to deal with the world around them.

The good news for crop farmers is that they can start with five minutes or one corn row at a time and the tractor cab is an excellent prayer closet.