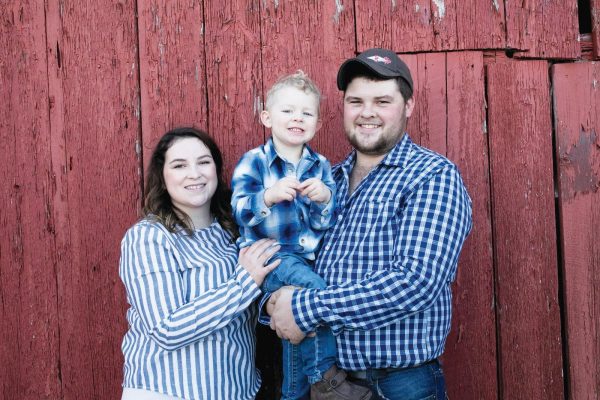 Cameron and Emily Stockdale were honoured with an agriculture leadership award.

They don’t fall far from the tree when it comes to farming in Peterborough County.

Cameron and Emily Stockdale were awarded the Agriculture Leadership Award recently in front of a full crowd at the new Millbrook Arena.  It would be full circle for Cameron who was part of the 2010 and 2017 Family Farm of the Year.

The Stockdale name is renowned in farming in Peterborough County through Embrdale Farm, which also boasts the 1999 and 2016 Master Breeder Herd.

Cameron is soft spoken when asked about the accolades. “It was a pleasant surprise for us,” says Cameron, who is doing what he likes the most. “I grew up working with cows and you get to be your own boss.”

The agriculture award is one of the most prestigious awards given out according to J. Murray Jones, the longtime warden of Peterborough County.  “Agriculture is very important to us and we like to recognize it”.

He explains each township in the County will host the event, “and it was good to be back after Covid shut us down the last two years”.

Cameron and Emily currently have 35 Holsteins and Jerseys and are looking to expand their herd.  “We’re trying to breed for better genetics in milk production”.

It was their initial work that got attention.

“Here’s a young couple that have been improving their barn and land,” according to Jones.  “Farming is hard work and they weren’t going to let that deter them.  They could have done something less difficult but didn’t.”

Cameron loves what he does, even the tough days, “if you’re having a bad day, there’s always another day coming”.

There’s a million things to do around the farm every day, but he and Emily make the time to help out the Holstein club, the 4-H Club as well as running events for area dairy farmers.

Farming is in Cameron’s DNA. He can’t see himself doing anything else.

He grew up working on his family’s successful farm and when he needs an unvarnished opinion or advice, he leans on his father, David who told him when it comes to farming, “if you’re not dedicated to it, it’s a hard job to do.”