BREAKING NEWS
19:28
Home News Featured News STEVE KELL: What do we do with the biggest wheat crop ever?

STEVE KELL: What do we do with the biggest wheat crop ever? 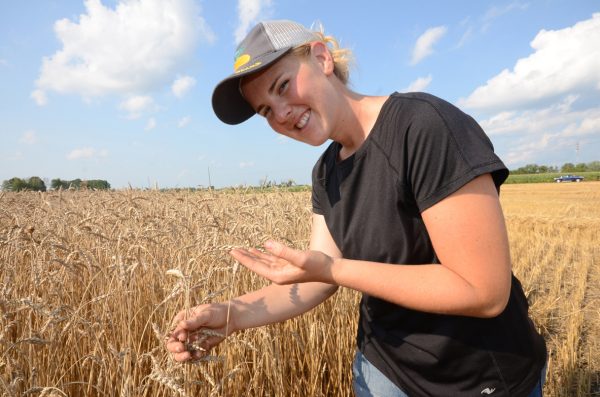 With an early start to the soybean harvest and excellent weather in the Great Lakes Basin, winter wheat planting is approaching record levels in the fall of 2015. Winter wheat acreage for the 2016 crop could be very close to double the 2015 harvested area. The question for all of the enthusiastic wheat planters is: how will all of this wheat impact the market?

On a continental scale, if Ontario’s wheat acreage jumps from 650,000 acres up to 1.3 million acres, it’s only a “drop in the bucket” in comparison to the North America’s 34-million acre total winter wheat area. Where the crop size has the greatest potential impact is in how it dwarfs the domestic demand for soft winter wheats.

By comparison, with over one million acres of winter wheat being planted this fall, there is likely to be about 750,000 acres of soft red. Even with normal yields, 2016’s production of soft red could come in at 1.6 to 1.7 million metric tonnes. That’s double the 2015 crop. Domestic flour milling demand is not expected to increase from the current 500,000-tonne level, so our “surplus” supply of soft red wheat in Ontario more than triples from 350,000 tonnes to a little over 1.1-million tonnes in 12 months from now. Somewhere our market needs to find an extra one million tonnes of demand.

Ontario has the geographical convenience of being located close to some significant U.S. flour mills in Ohio, Michigan, and New York state. But new crop wheat prospects in those areas are expected to be very similar to Ontario’s due to similar weather at planting. The reality is that we will find new demand for wheat if it gets cheap enough that it makes sense to feed it, or we will move wheat into the world export market.

For Ontario’s 2015 winter wheat crop, supplies were tight enough that our prices never had to come down to meet international prices. The marketplace had the luxury of trading within the island of North America. However, barring a devastating winterkill situation in the upcoming six months, we will be participants in the global wheat market this coming summer and fall. This means that farmers need to develop a much broader geographic view of market-making news as they monitor price potential for the crop which they are sowing. Unlike 2015’s crop, considerations like French soft wheat production and Black Sea port logistics make a difference to price when we are sellers in that global marketplace.

There are really three questions that producers need to be asking themselves. Would I sell wheat at today’s forward contract values? If that price doesn’t interest me, what price would I sell 2016 crop wheat at? And what reason do I have to believe that the price could reach my target level?

The third question is clearly the most important of the three to be able to answer. What a seller wants to receive is not nearly as important as what he is apt to get. Marketing a crop in a time of supply scarcity is a fairly easy task, but that will not be the case for the 2016 crop of winter wheat. Proactive growers are going to need to focus on a deliberate and considered marketing plan for new crop wheat.

There’s potential for an entirely profitable crop in the coming year but start sales early and monitor the world markets. That’s critical for whether or not you make any money.

Steve Kell operates a crop farm in Simcoe County and is a grain merchant for Parrish and Heimbecker Ltd. in Toronto.