BREAKING NEWS
03:08
Home News Featured News Soybean yields ‘as good as it gets’: Early harvest and big yields from Renfrew to Cornwall

Soybean yields ‘as good as it gets’: Early harvest and big yields from Renfrew to Cornwall 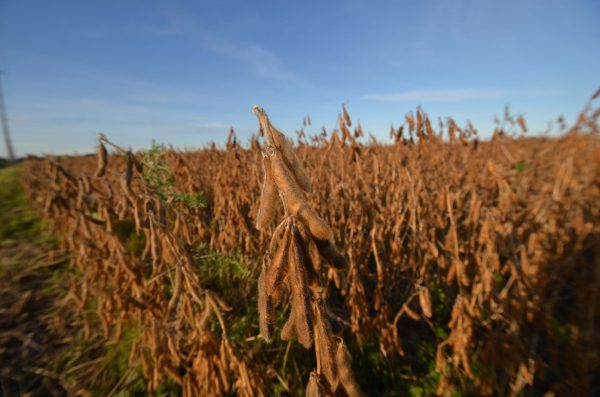 DOUGLAS — With a career-record start date of Sept. 21, Kevin Dick recorded early soybean yields hovering around 50 bushels per acre with only a trace of white mould.

“The odd field may touch 60 bushels. This may be the best bean year the county has ever had. This is as good as it gets,” said the Douglas crop farmer, who operates Barclay Dick & Son Farm Supply.

Green stems made the early harvest tough, with only 15 per cent of fields done by Sept. 30. Some fields across Eastern Ontario have been hit hard by white mould but August heat limited its spread and yield impact, said Gilles Quesnel, an independent agronomist based in Winchester.

Combined with early planting and prolonged damp conditions that helped keep aphids at bay, soybean yields may be a solid 50 to 60 bu/ac but won’t likely break records, he said.

The five-year provincial average is 46.7 bu/ac.

Thanks to heat and timely rains, Chesterville crop farmer Marty Derks combined 58 bu/ac soybeans. “The soybeans didn’t look as good as the corn but they always hide their yield.”

But the crop didn’t look as promising further west.

Grafton crop farmer Ian Greydanus had to fine-tune the combine to prevent his over-dry IP soybeans from splitting. But the late May frost was the killer, stopping an early-planted crop in its tracks.

“I’ve never in my life had to replant due to weather. This year we did 260 acres and we should have done another 150. That stuff is hurting,” said Greydanus, adding that too much rain hammered the untiled ground. “We have awesome to s–t. If we hit average, that’ll be it.”