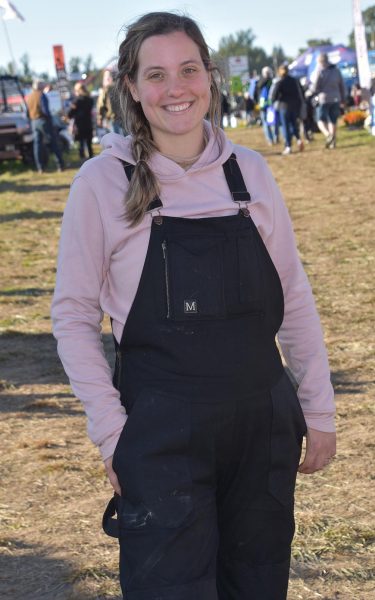 KEMPTVILLE — Brantford-area market gardener Nicole Toebes always found men’s overalls too bulky. So the mother of three young children and wife of a local dairy farm manager took matters into her own hands. In September 2020, she and her husband launched their own line of workwear — Mudeas (pronounced muddies) — starting with overalls in both men’s and women’s lines.

Her female overalls aren’t just a smaller version of the male type,  “which is such a typical thing in the industry,” Toebes proudly points out during a talk delivered at the 2022 International Plowing Match. For starters, the waistband on the women’s overall is lower than the men’s, she says.

In keeping with her goal of being innovative, the design also features a magnetic-closing top pocket, “so you’re not going to lose your cell phone in the gutter.” Much of the garment is made from a cut-proof and waterproof material.

The Mudeas line has since expanded beyond the flagship overall into T-shirts, hoodies, coveralls and toques — with work pants and kids’ clothing set to debut next year. It’s all made in Ontario, she says, and finding a manufacturer based in the province was one of the tougher challenges during the two-year research period before the launch of the new brand.

Company sales have grown 600 per cent in the last four months, according to Toebes, and everyone she reaches out to — including a recent contact at the Toronto International Film Festival —seems taken by the brand and wants to be associated with it. A big-name boot maker was quick to send her several free pairs to complement Mudeas promotional photos.