CHESTERVILLE — Byers Farm Equipment is augering in a new era — as is the woman who has been at the helm for the last 43 years. Former proprietor Lezlee Byers officially became an employee at the Chesterville-based business June 14, when a new ownership trio took over.

Gordon MacMillan of St. Albert and father-son team Michel and Jean-Philippe Laplante of Valleyfield, Que., have jointly bought the operation known for its stabling and stalls, material- and manure-handling equipment, feed mixers and ventilation. MacMillan is general manager while Byers stays on in sales for the next two years at Byers Farm Equipment — now with “MacMillan L&L” appended to the end of the company name.

The inventory will also expand as the firm adds the grain handling, bins and drying equipment lines the Laplantes are known for at the original Ormstown, Que. business — Les Équipements L&L Ltée.

The Chesterville site will continue to offer Canarm, Val Metal and J Lore products, as well as “all of the lines here that we have” in Ormstown, says Michel Laplante. Expect to see some outdoor displays of the expanded offering, he says, suggesting a grain tank and a conveyor or two will show up at the Byers Road address. Their big brands include AGI, Walinga and Sukup.

MacMillan comes to the business after a long career working for a competing operation. He and Lezlee Byers knew each other, crossing paths many times. “I had told Gord in the past that the business was for sale,” says Byers, standing outside with the group on the day of the transition. “It’s better because you always want your business to continue and expand, not close. It’s good for everybody,” she says. “And the people in this area always kept saying to me, ‘What are we going to do when you close?’ It’s going to be so much better for everyone.”

“The stars aligned,” concurs MacMillan, who is also licensed to work on grain dryers.

It was MacMillan who recognized a good opportunity and made the connection with the Laplantes. Michel Laplante had already expanded his business footprint a few years ago by opening a second outlet — Agri- Service Montérégie — with another partner in St. Jean, Que. This is his first move into the province next door.

“I think Eastern Ontario has great territory, and lots of possibilities,” observes Michel Laplante. “Especially in the grain industry and grain handling, it’s not really — I think — well covered. There are a lot of cash crop producers.”

Jean-Philippe Laplante says the work has already begun to bring Chesterville online with a common computerized inventory system with the other two locations. “We can better serve the customers that way,” he observes. “If we know somebody has the parts, even if it’s an hour away, it’s not that far to get you out of a jam.”

Lezlee Byers says her late father, Stuart, branched out from construction to start what was a Jamesway dealership in 1970. He would be “very happy” to see it continue, she says. “And that’s one of the reasons I kept on working, because I didn’t want to close shop. It’s exciting,” adds the married mother of two adult children.

She officially joined the operation in 1978 — though she had also helped out after school going back to the early 1970s. Her father gave her complete charge in 1979 when she was only 22-years-old, as he pursued silo projects in the Toronto area. As a familiar face behind the counter, Byers reports no trouble picking up responsibility for sales and making deals with farmers of that era. Chauvinism was not an issue. Her age and gender caught the attention of the Ottawa Citizen newspaper, which celebrated Byers as an atypical female agribusiness owner “making it big in a man’s world” while “ankle deep” in the “liquid gold” of a prospective customer’s hog barn.

For the last decade, the business has run with just the owner and a single employee, Patty Duke-Daines, who is staying on.

“It’s been 43 years, and it doesn’t feel like it,” Byers marvels. She credits her love of the work for allowing time to fly. “It’s only because you enjoy it that it’s not as much of a job as a privilege.”

Though she signed on to stay for two years, she hasn’t ruled out sticking around longer if given the option. 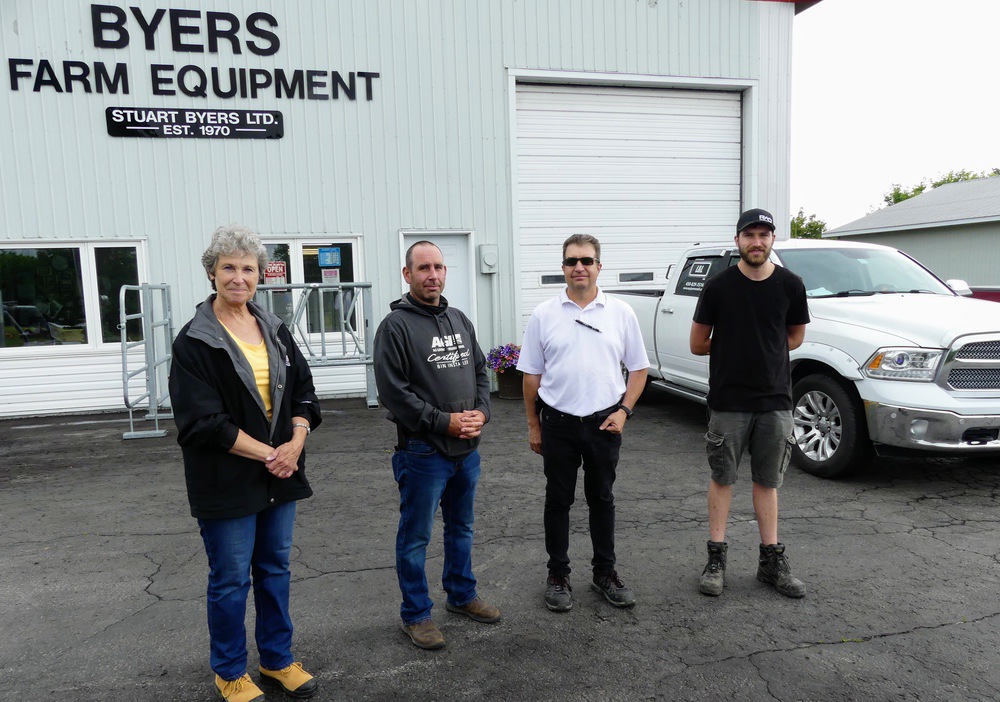