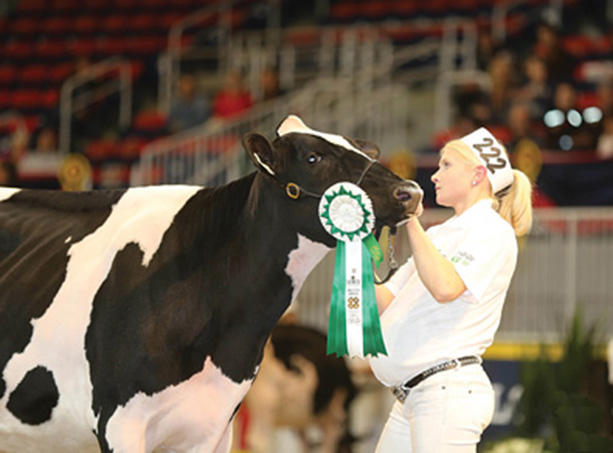 By Brandy Harrison
TORONTO — Even at 37 weeks pregnant, Jessica Brown couldn’t let her stylish heifer miss the big show. With barely three hours of sleep before a 3 a.m. wakeup call, she was on her feet until nearly midnight to give Trent Valley Goldchip Abra 6 the chance to strut her stuff at the Royal Agricultural Winter Fair.

“I wasn’t so sure I’d be up to it. I braced myself. If I set my mind to something, I want to see it through. It definitely paid off,” says the 21-year-old, adding it doesn’t hurt that the independent heifer knows her way around the show ring. “She has a little bit of spunk. Abbie holds her own. Having a big presence attracts the attention of the judge. That extra bit of energy she displays is really captivating.”

Judge Molly Sloan, who crowned Abra champion calf at the TD Canadian 4-H Dairy Classic, might have seen the same thing that caught the eye of Brown’s partner, Adam Hunt, when he first spied her as a baby calf. Brown fell in love with Abra immediately, scooping her up at the dispersal of Gerald Coughlin’s Trent Valley herd this past summer, along with Lorne and Bobby Briscoe of Bonnechere Holsteins and Hunt’s Trekili Holsteins.

“When I first saw her, I had butterflies in my stomach. It’s that correctness and overall balance that sets her apart from the rest,” says Brown, who runs Lilyking Farm in Elginburg with Hunt and her mother, Mary Pearson.

By the time she made it to the Royal, the 14-month-old heifer already had a junior champion title at Autumn Opportunity, having easily bounced back from a bout of pneumonia at the World Dairy Expo in Madison, Wis., says Brown.

“She does know how to rise to the occasion when she’s in the show ring.”