Shadow flicker, noise and spooked horses; North Stormont gets its wind turbines and the fallout that was expected 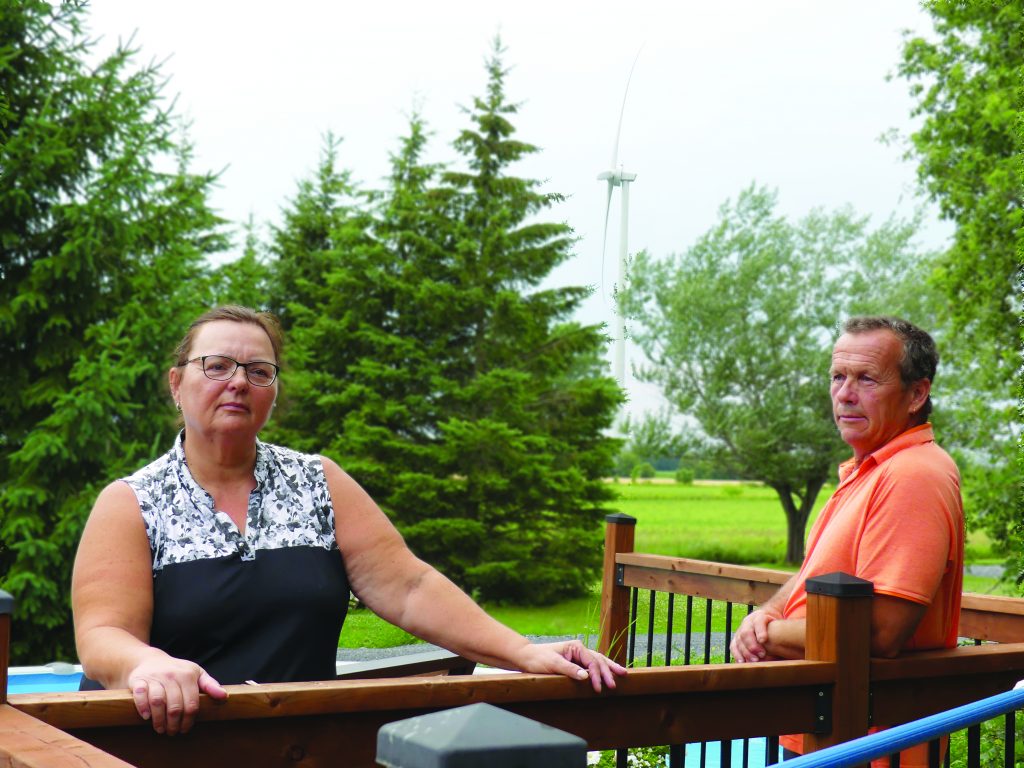 Retired dairy farmers Sharon and Tom Anderegg say that shadow flicker spooks their horses, casts shadows in their house and they can hear the turbine blades turning. (Nelson Zandbergen photo)

The effect is expected to grow more noticeable as the season shifts into fall and then winter — when the sun drops lower in the sky and shines through leafless trees.

A couple of North Stormont farm households — both of which spurned offers to host turbines on their land — say they’ve already noticed it in the days since the 29-unit project received commercial operations approval in July.

Cash-croppers Stephen and Rita Shane say they can see shadow flicker on their front lawn and in their living room. “It’s a certain time of the day, it’s not every day,” Rita Shane explained.

Based on the developer’s shadow flicker study, the Shane place — located on Shane Rd. — will be subject to the phenomenon 158 days a year, the highest exposure in the township.

“On the map, we are one of the most hit properties,” she said. “We’re right smack in the middle of (the turbines).”

The strobe-like effect changes with the time of day and position of the sun in relation to several turbines visible from the farmhouse — six seen from the Shanes’ front verandah, plus three off the back of the house.

“Early in the morning, the shadow flicker seems to be right behind our grain bins,” she said. “In the evening, it’s in front of the house.”

Some of the turbines are currently obscured by trees in full foliage. “But I’m afraid this winter, I don’t know what it’s going to do, we might see more of it,” she said. “I’m afraid when the sun sets, we’ll probably get the three off my back deck hitting us.”

Stephen Shane said he’s observed shadow flicker both inside his livingroom and while working the fields at the 500-acre farm. As the sun rises, turbine blades nearly a kilometre away cast a repetitive shadow on the land. “You can see the shadow flicking across,” he said.

“I guess it’s something you’ve got to get used to; they’re there now.”

Tom and Sharon Anderegg’s former dairy farm property is in line to catch shadow flicker 122 days a year from one of three turbines arrayed near their home off County Rd. 13.

Now semi-retired, they dispersed the herd in 2004 and today enjoy riding horses on their property.

Sharon Anderegg says the flicker “terrifies” the horses. “They’re OK with a shadow, but a shadow that moves might eat them. They get upset. The first couple of times my horses were spooking, and I didn’t know why,” she told Farmers Forum.

Describing the turbines as “very invasive,” she noted that some of the bare windows in their secluded home will need curtains for the first time in 30 years. She pointed from the kitchen into the livingroom, where a large window overlooks a nearby turbine. “It’s just this constant flicking.”

“Over and above the flicker, the sound of them is irritating. It’s just that ‘whoosh, whoosh,’” Tom Anderegg added.

The Shanes similarly say they hear the turbines at their property. Rita Shane likened it to a “weird pressure” or buzzing in her ears, while Stephen Shane called it a “whining” audible noise at night.

But neither household is so bothered as to consider moving. And both couples say they will look into a recently established compensation fund established by developer EDP Renewables to help pay for window blinds and other shadow flicker mitigation measures.

The $150,000 fund was set up as part of a negotiated settlement between the Concerned Citizens of North Stormont and the developer. The Concerned Citizens’ Margaret Benke says the fund opened for applications July 26 and will operate for a year to give residents time to learn if they’re affected by the phenomenon as seasons change.

More than 470 properties were identified in the shadow flicker study as possibly being affected.

“There are all kinds of people who will discover they’re exposed to shadow flicker over the course of the year. It could be any month of the year. It depends on the position of the turbine in relation to their house,” Benke explained. “They’re welcome to apply to the fund.”

The Shanes and Andereggs also have in common their refusal to host turbines on their farms — having turned down the developer during the project’s planning stages. They both say they’re pleased by that decision.

Sharon Anderegg said she flat-out refused to speak with representatives that repeatedly came to the door, eager to strike a deal to put turbines on the 300 acres she and her husband then owned.