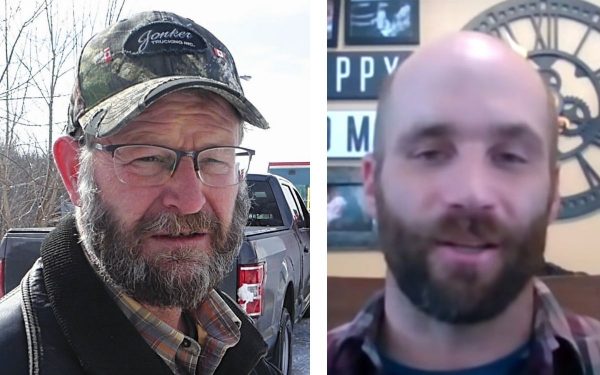 ONTARIO — Despite tough talk from the federal government, provincial government and the Mayor of Ottawa, as soon as Prime Minister backed off the Emergencies Act, the aggressive attack on Freedom Convoy protestors evaporated, protestors say.

Those honking trucks famously towed away from Ottawa’s downtown core are back in the possession of freedom convoy participants who — as it turned out — saw their commercial licences suspended and rigs impounded for a mere 7 days.

Truckers say the suspensions and seizures amounted to scare tactics.

Despite Ottawa Mayor Jim Watson’s stern musings about seizing and selling off the trucks, a stream of drivers arrived to pick up their respective machines from a city impound yard on Saturday, Feb. 26 — exactly a week after their removal from the Parliament Hill and downtown core. Twelve Ontario trucking firms had their trucking licence suspended for seven days.

In the case of Derek Brouwer, from Cambridge, and others they only paid a $1,160 towing fee but no actual fine.

“There’s a lot of misinformation out there,” the Cambridge area hay producer and exporter told Farmers Forum.

Brouwer also confirmed that the province — in approval of the federal Emergencies Act— carried through with a suspension of his Commercial Vehicle Operators’ Registration (CVOR) for seven days, which also laid up his other trucks.

Harold Jonker, of Jonker Trucking in Smithville, confirmed that two of his truckers were retrieved from the public works lot on Feb. 19.
Jonker said his Dutch farmer grandfather would have been very proud of his company’s participation, having lived under German occupation in the Netherlands during World War II.

The Jonker operation, which specializes in flat-bed hauling, had 10 trucks at the protest. Leading a convoy from the Niagara area, he said he was the first to arrive on Wellington Street.

He was welcomed home with a parade, the CBC reported. Jonker also serves as a municipal councillor with his local Township of West Lincoln. Two of his council colleagues unsuccessfully attempted to launch an integrity commissioner investigation into his participation in the protest, but that idea was shot down by the majority.

On his YouTube channel, freedom convoy Wellington Street leader, David Paisley livestreamed a Feb. 19 reunion with his shed-toting truck that previously occupied a prominent place on Wellington. He said windows were left down on his and other trucks, ensuring the cabs filled with snow. Others had dead batteries because lights were left on. Another was difficult to start, Paisley reported, as the diesel engine had been left to idle until it ran out of fuel.

Despite the hassles, it was a far cry from the strong words employed by the Trudeau regime when it invoked the Emergencies Act Feb. 14, then pulled the plug 9-days later, prior to a final parliamentary vote in the Senate. The only law that Farmers Forum could confirm with Ottawa Police that the demonstration had broken was illegally-parked vehicles.

As police slapped a “red zone” on much of the downtown core, they said that anyone with children in the area could be charged $5,000 and face up to five years in jail. Children were present within the zone, but there’s no report of anyone being hit with such a charge and on many occasions police walked right past adults and their children. Meanwhile, an Ottawa police tweet warned protestors that their pets could be seized if, for some reason, they were separated from the animals and failed to pick them up from the pound within 8 days.

Deputy Prime Minister Chrystia Freeland warned participating truckers Feb. 17 that their corporate bank accounts would be frozen and their vehicle insurance suspended. “The consequences are real, and they will bite. It is time for you to go home,” she said. The RCMP said that it did not use an illegally-leaked list of donations to the Freedom Convoy. Convoy donors gave the money legally.

Derek Brouwer confirmed he was among those that had their bank accounts put on ice for two banking days in the final days of Trudeau’s invocation. He said his hay business and personal accounts were frozen Friday, Feb. 18, followed by his farm accounts on Saturday night “and all of my credit cards, too.” The TD Bank didn’t unthaw his accounts until 10:30 the following Monday morning, Feb. 21. Other protestors and donors reported having their bank accounts frozen for at least two days.

Brouwer said he will be withdrawing his funds from TD Bank. Security, he added, is now his top banking priority.

Trudeau dropped the Emergencies Act before a vote in the senate, which would have forced the Liberal government to divulge intelligence on why the Act was triggered.