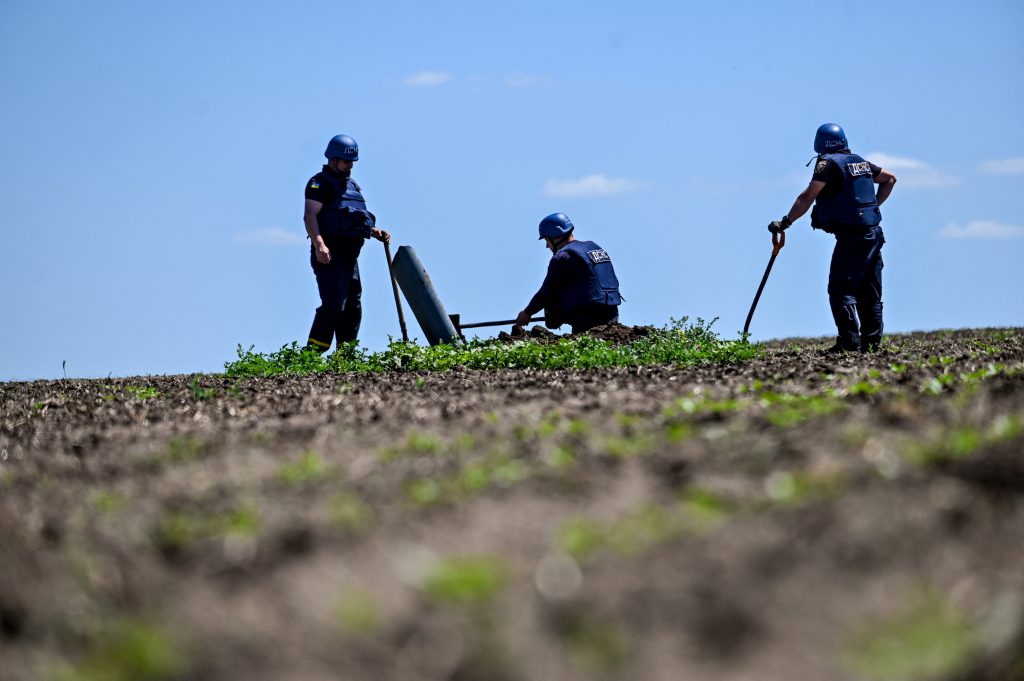 An explosive disposal crew with Ukraine’s State Emergency Service at work removing the remains of a Uragan rocket and other explosives on a farmer’s field in southeastern Ukraine on June 7. Farmers were given bulletproof vests before planting. (CP photo)

OTTAWA — It is rare that war becomes the focus in a House of Commons committee meeting on agriculture. But in two meetings last month, the agriculture committee was told that Russia planned a global food crisis by bombing Ukrainian grain storage facilities and railways to stop the transport of grain and have now stolen Ukrainian wheat at southern ports. Canadian Members of Parliament were also told that Ukrainian farmers have risked their lives planting crop in fields booby-trapped with explosive mines.

In dramatic testimony, Ukraine’s Deputy of Infrastructure, Yulia Klymenko, told MPs in an online meeting that unexploded mines are on 13% of the country’s farmland and that tractors have blown up and farmers have died on their fields.

She added that an interruption of the global food supply was no accident and was not collateral damage caused by war in Ukraine. “It was a planned hybrid weapon to further massively destabilize the global economy and political order through (the) instigation of famine in Africa and Asia that will result in flooding immigration to North America and to Western Europe,” she said. “We have seen this scenario previously played by Russia in Syria that caused massive immigration to Europe and reformed the European political process. This time, food is the weapon and the scale of the crisis will be much bigger.”

Ukraine feeds 400-million people, mostly in low-income countries, she said. For example, “Egypt depends on Ukraine for 80 % of wheat consumption.”

Klymenko said that Russia also expects to boost revenue from spiking global food and energy prices and is holding grain cargo ships hostage at Ukrainian ports. She added that 90 per cent of Ukraine’s food exports go through sea ports.

Russia occupies 20 per cent of Ukraine, according to the Ukraine Ministry of Agriculture and the country still hopes to harvest 75 % of its farmland. Meantime, “Russians are bombing all the time,” Klymenko said. Ukraine needs help with new grain storage facilities as “there will be little storage available for the new harvest.”

Klymenko has two sons staying with relatives in Toronto. Her husband is on the front lines. He is a sniper. She was quick to the point the way to avert a global food crisis.

Ukraine needs a lot of weapons and ammunition, she said. “It will be much cheaper to invest in heavy weapons in Ukraine.” She explained that Ukraine needs to destroy more than 25 Russian warships and submarines in the Black Sea and to do that Ukraine needs 777 howitzers, long-range cannons.

“All my Asian and African colleagues are praying that we can unblock the seas and deliver the grains. People are already starving in Africa.”

In testimony on June 10, Canada’s assistant deputy minister on global issues with the Department of Foreign Affairs, Trade and Development, Peter MacDougall, noted that Russia has put restrictions on its own agricultural products and is “using food as a tool of war” in hopes of gaining land concessions.

“We have received the specific request for grain storage,” said Tara Denham, director of the Ukraine strategic action team with Canadian Foreign Affairs.  The Canadian government is working with Agriculture Canada and is “exploring organizations that we have worked with before that have procured this type of equipment so we can move fast.”