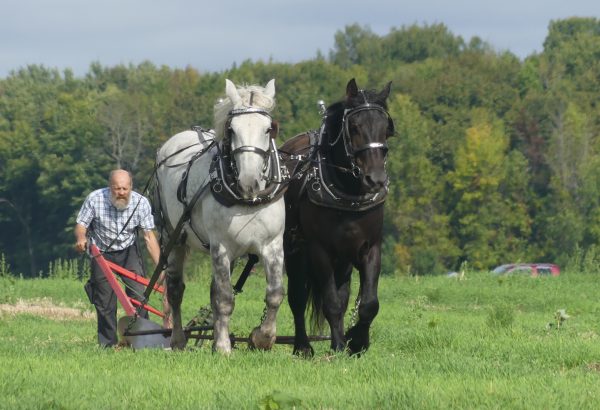 Patrick Meagher
Farmers Forum
KEMPTVILLE — Terry Linton and his two sons are a trio of champions at the International Plowing Match. He has won the horse plow competition (his class is the walking plow single furrow) at least six times and at the last IPM in 2019 his son Brad finished first. His second son Eric finished second. Terry Linton finished third.
“What do they say?” Eric chuckled. “That’s when the student becomes the teacher.”
The Lintons operate a Roseneath dairy farm, milking 60 head, and have eight horses they use for sleigh and wagon rides. Terry Linton began competing in the IPM about 30 years ago.
Son Eric, 35, has been competing since he was about 20. “It’s more technique than anything,” Eric said. “You can’t really strong arm it.”
You also need good horses that walk well together so you can concentrate on your plowing to get nice and uniform rows, he added. “The biggest thing is practice and it’s nice if your team walks slowly.”
The competition allows for five-and-a-half hours to complete 12 single rows 100 feet long. Why so much time? “It takes time,” Terry’s wife Janet said. “There’s a chat at every end.” Sure enough, when Terry finished a row he stopped to look it over and talk to the two men standing at the end of the row. When he plowed back there was family to talk to.
So, how they do this year? Brad retained the title as overall horse plow champion, beating out 20 competitors that included jointer plows and sulky plows, and took home $890 in prize money from daily winnings, top in class and overall champion. His father, Terry, finished second and took home about $650. Eric figured he finished third or fourth but won’t know until he sees the total point tally when it arrives in the mail.