Five years after his father died and cows and quota were sold, Jeremy Rose decided to take on the family farm 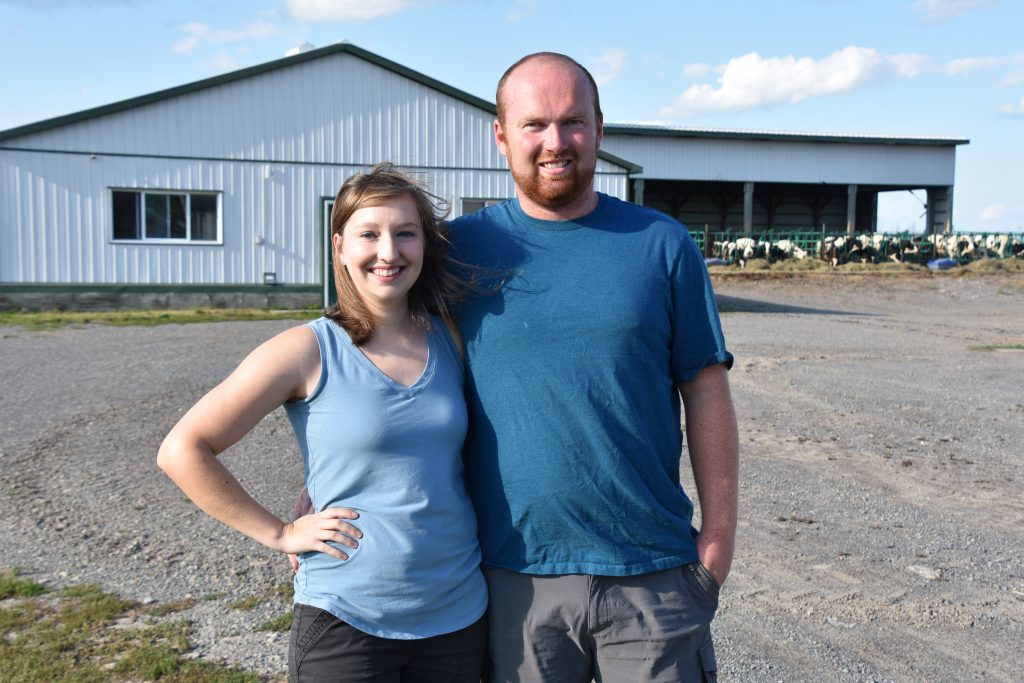 WINCHESTER — Jeremy Rose may be a “new” dairy farmer at his family’s tranquil farmstead tucked behind corn fields at the end of a long laneway off County Rd. 43. But he also embodies the auspicious revival of family dairying tradition — tragically interrupted in 2013 by the sudden death of his father, Ken, who succumbed to a heart attack at age 50.

Back then, Jeremy was just 21 years old and a fourth-year Carleton University biology student who worked in soybean research. In the immediate aftermath of the tragedy, he wasn’t ready to try and assume his late father’s position, nor was his younger sister — Geena, today a registered nurse in British Columbia. “It just happened very quickly. I wasn’t sure. I also thought the outlook on the industry wasn’t very positive at the time,” 29-year-old Jeremy says, reflecting back on the situation with his wife, Alison, also 29, at his side.

And for a time, the painful and abrupt loss of his father tainted the very notion of becoming a farmer himself, he admits. “You see your dad in farming for many years, and then not around anymore, it’s a little hard to stay in the profession.”

The storied Rosayre Ayrshires herd — one of the best of its kind in the country — was dispersed. However, Jeremy’s mother, Shirley, continued to keep a few animals in the barn — as well as a few others at her brother’s Belleville-area farm. She also carried on showing a bovine or two for years at the Toronto Royal Winter Fair after the milk truck stopped coming to the farm.

But by April 2017, Jeremy conceded that soybean research — he was employed at Monsanto in Guelph — just wasn’t fulfilling anymore. He started the quest to bring milk production back online where he had grown up, but in a way that would allow him to work off farm long-term as a dairy nutritionist at Willow’s Agriservices in nearby South Gower (a position he enjoys and has no intention of leaving).

His mother, Shirley, had some reservations about such a revival but is clearly delighted today at the renovation of the former tie-stall barn that has been transformed into a free-stall operation with TMR feed mixing as well as labour-saving robots for both milking and manure removal. 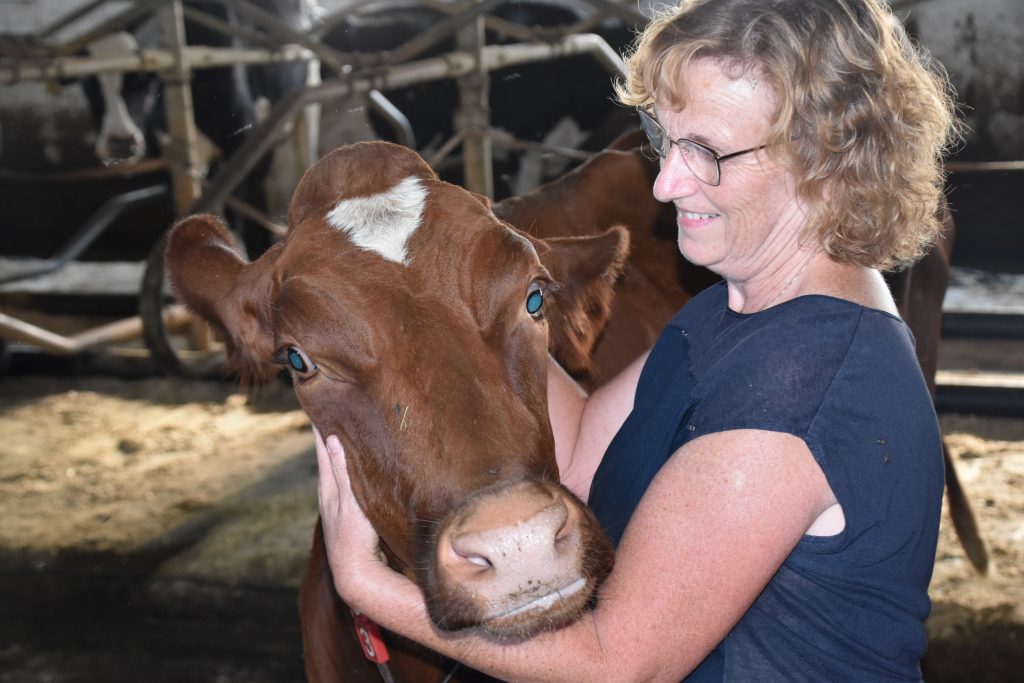 Shirley Rose and one of the prized Ayrshires that still leaves at the home farm. (Nelson Zandbergen photo)

“It’s totally different. Different feeding, all of that, too,” says Shirley, who recently retired after 33-years as an X-ray technologist at the nearby Winchester hospital. Her late husband “would be surprised” to see the farm now, she reflects. “He would be very, very happy.”

Jeremy, however, can’t quite bring into words what his dad would think of the renewed operation. “I probably can’t get through that sentence, so I’m just not going to say anything.”
Revamped at a cost of approximately $400,000 to $500,000, the barn currently houses 29 pedigreed Holstein milk cows with — in a nod to the recent past — a handful of Ayrshires descended from the Rosayre line. With an eye to continued growth, there are stalls for 50 cows.

But first, there was the matter of reacquiring quota from the Dairy Farmers of Ontario, and on his second try, Jeremy was a successful applicant to DFO’s new entrant program in December 2018. Encouraged by his bank to take this route, the program allowed him to immediately borrow 16 kg of quota from DFO and buy a matching amount. He’s since built up his quota holding to 37 kg by buying what’s available on the monthly exchange. He owns the quota and his mother — who still lives on the 220-acre farm – rents him the land.

‘Rock-n-Rose Farm’ — as Jeremy calls the operation these days — shipped its first batch of milk to DFO in June 2019, out of the same cooler used by the former Rosayre herd.
Twenty of their first batch of 24 cattle were already trained to use a robot and adapted to their new surroundings amazingly fast. “It was a fairly easy start-up,” he says.

“I find it amazing, the robotic side of things,” observes his wife Alison, who grew up in Mississauga, and is a clinical psychology PhD graduate at York University. She helps out in the barn — especially feeding the calves —since COVID restrictions allowed her to take classes online.

So far, all farm revenues have gone back into improving the operation and buying more quota, he says. “I just want to get stuff paid off so we can keep the wheel turning.”
Each day on the way to the barn, Jeremy drives by the original farmhouse where his father grew up and where his grandmother, Elizabeth Rose, still resides.

He doesn’t kick himself for not being immediately ready to pick up where his father left off. Sure, he would have been further ahead today, he says, “but you can go down a pretty deep hole of playing ‘what if.’”

He’s also better educated now and continues to learn, he says, while coming to appreciate the full scope of what his father was managing on a day-to-day basis. His voice trails off as he remarks: “It’s challenging sometimes, you know, I have a lot of friends who work in ag, and on their family farms, and you see them working with their father …”

Jeremy points out that he still has his mother as a resource, as well as many farming friends to turn to for advice. “Everything’s going well, but it’s a lot sometimes.”

Still, he’s happy with what he has achieved in two years. “I’m excited to be back farming. I hope to be doing it for a long time.”