BREAKING NEWS
05:06
Home News RISE OF THE INNOVATORS: They are named young farmers of the year

RISE OF THE INNOVATORS: They are named young farmers of the year 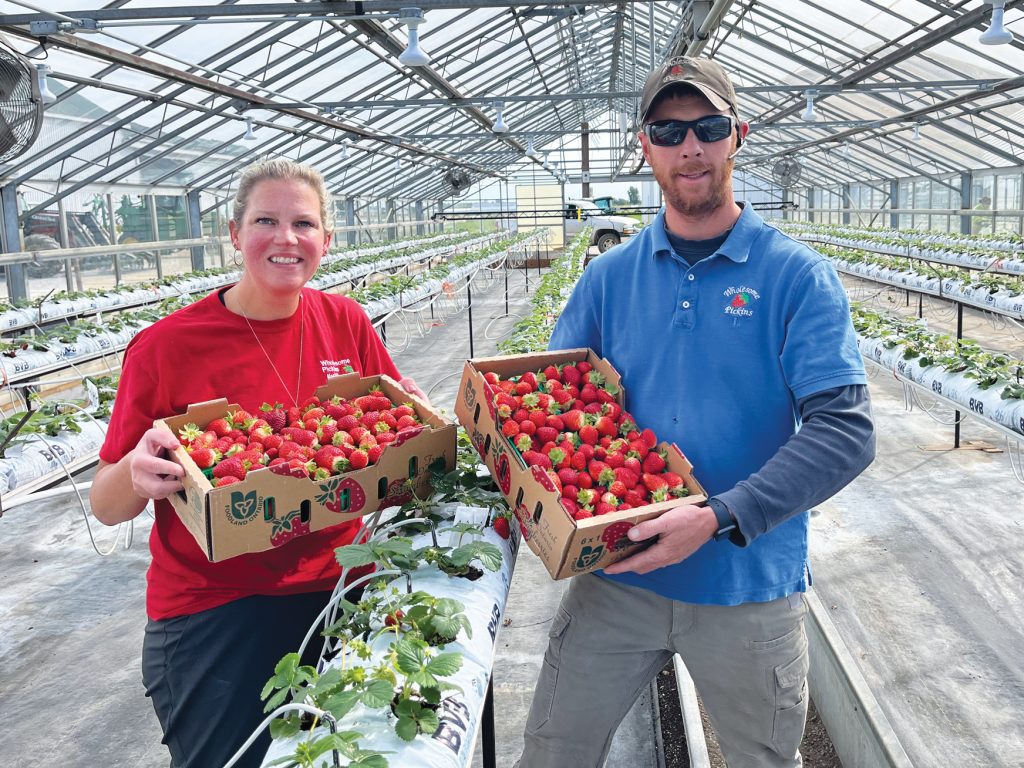 DELHI — Tobacco and hard work made it possible for David and Jenn VanDeVelde to transform their Delhi farm into a successful market garden and local vegetable retail operation known as ‘Wholesome Pickins.’

For the first time in four generations, the VanDeVeldes’ farm this year grew only strawberries, raspberries, pumpkins, asparagus, rhubarb, squash, and a variety of regular commodity crops — entirely displacing tobacco as the longtime staple.

She and her husband were named Ontario’s 2022 Outstanding Young Farmers for demonstrating excellence in agriculture. They grew their farm from 50 to 300 acres while innovating with crops, equipment and marketing.

Jenn concedes they felt some trepidation about going without the farm’s traditional anchor crop in 2022. Though tobacco offered some economic certainty over the years — and they don’t rule out growing it again — the leafy plant has been losing its luster, she says, as margins have been squeezed with per pound prices unchanged in about 20 years.

They were hesitant, she says, to invest in modern tobacco-harvesting equipment or new kilns because of continued volatility in that sector, which was backstopped by a type of supply-management system until 2009. Instead, they put their money into the horticulture side of the business that began with just a few flats of strawberries sold at roadside from an old tobacco-tying machine.

Both graduates of the University of Guelph, she and David — both turning 40 this year — moved back to his family’s home farm in 2006 and went on to buy the place.

They hit the ground running and put their horticultural education to work. “Every year we would try a different crop, and it would work or it wouldn’t, we were always trying to innovate and diversify,” she says.

She and her husband are both innovators “looking to push the envelope,” she says. “The status quo doesn’t really sit well, once we get going on something.”

The idea to pursue market gardening grew out of his desire to be a farmer no matter what. Beyond tobacco, “we felt like we could do this one thing (horticulture) really well,” she said.

As a couple, she says they run the business entirely by themselves and have complementary skills. David is the “born and bred true farmer” while Jenn — who comes from a non-farming background — is the people person, the “bubbly face” to suppliers and customers. She’s a natural, a marketing firm’s dream.

They don’t necessarily spend a lot of time talking about business ideas before acting on them. “I do find that the greatest things we’ve ever done have sometimes come from the least discussion,” she observes. “Not letting ourselves talk each other out of it.”

She points to their abrupt decision to immediately include a kitchen in their 2013 retail barn renovation project, an improvement accomplished in just eight days. “We’ve had a lot of success kind of following our gut and jumping in.”

Both held off-farm jobs — she worked as a high school teacher until 2017 — but now derive their incomes solely from the farm, where the Wholesome Pickins store occupies the large barn. Nine months of the year, customers are drawn to the out-of-the way operation — named after a former health food store Jenn’s mother once operated south of Ottawa in the touristic village of Merrickville —for produce and baked goods.

The farm store also serves as a market hub featuring the goods of about 50 other local growers, artisans and even a clothing line. Forget the 100-mile diet, many of their suppliers are located within about 10 miles of the farm, according to Jenn. Trying to supply a store through the distant Toronto Food Terminal — or growing food to be shipped there — never made sense from the outset. “We took a different approach and focused on quality and sourcing food from our own fields and our neighbours,” she says. “When we were talking about it, why would we drive to Toronto to pick up produce that our neighbours are growing?”

Tobacco’s legacy continues to nurture their growing enterprise. The rich, sandy soil so good for the old crop is also great for strawberries and other vegetables. Extensive irrigation systems used for tobacco-growing were repurposed for the new crops. David also converted a tobacco-plant planter into a strawberry planter. His work modifying tobacco equipment to grow everbearing strawberries previously earned the farm a premier’s award for agri-food innovation, in 2013.

Jenn also highlights the farm’s long practice of hiring a crew of 20 tobacco workers from Jamaica. Fifteen were brought back this year to work in the vegetable and berry operation exclusively.

They also employ up to 15 part-time students through the season, as well as several full-time local adult staff. Filling those full-time positions has proven to be one of the operation’s biggest challenges, she says, an issue that has “at times slowed the progression of the business.”

But as entrepreneurs they confront obstacles and challenges “all the time,” she candidly says. “Everyday there’s something. A problem you can’t solve or money you don’t have, and we’re kind of like, ‘Should we be doing this?” she chuckles. Such thoughts may arise after working a day’s already “insanely long hours,” before heading into the barn kitchen to bake dozens of pies in the evening because there wasn’t any staff to do it.

Attesting to their level of dedication to both farm and family, Jenn says that she and her husband, who have a 14-year-old son and 12-year-old daughter, describe the business as their “third child.”

An engaging advocate for the farm, Jenn fronts the enterprise. She’s made a point of reaching out into the community and build relationships. She’s been known to personally deliver cheques to her suppliers so she can talk shop.

She agrees that being extroverted and gregarious helps when marketing farm produce directly to the public and building brand awareness. But for those thinking of entering the sector, she suggests that striving to be authentic — while offering top quality — are possibly more important.

The VanDeVeldes will represent Ontario when the Canadian Young Farmers program selects the 2022 national winner in Saskatoon next month. Jenn says they are “extremely excited” to take part.