Rise and fall of dairy farming on Wolfe Island 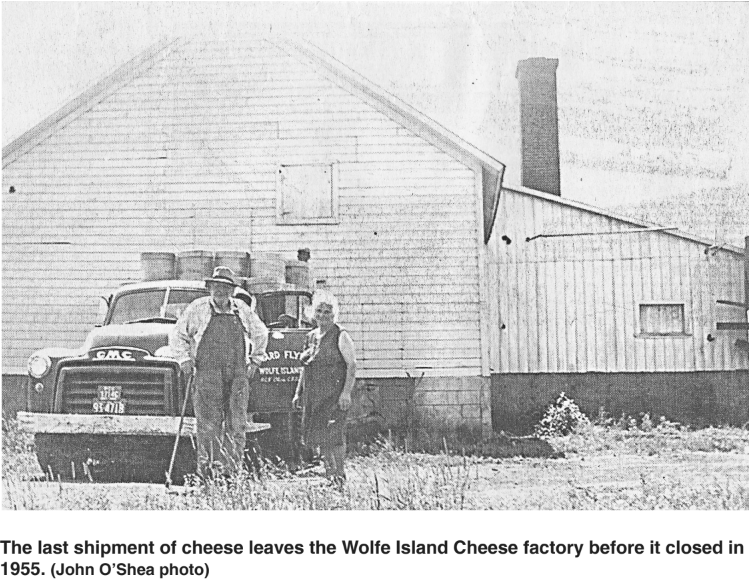 WOLFE ISLAND — Wolfe Island is 30,000-acres of farmland and rocky shoreline squatting in the middle of the St. Lawrence River, about five kilometres south of the mainland, as the crow flies, and in view from downtown Kingston. There are about 1,400 inhabitants on the island year round but that number almost triples with cottagers in the summer. There are 86 wind turbines spread across farmlands on the west end of Wolfe Is- land producing power directly to the grid in Kingston. In the village of Marysville there is a general store, three restaurants, a post office, a service centre, gas station, bakery, ambulance/paramedic unit, fire station, town hall, and public library. 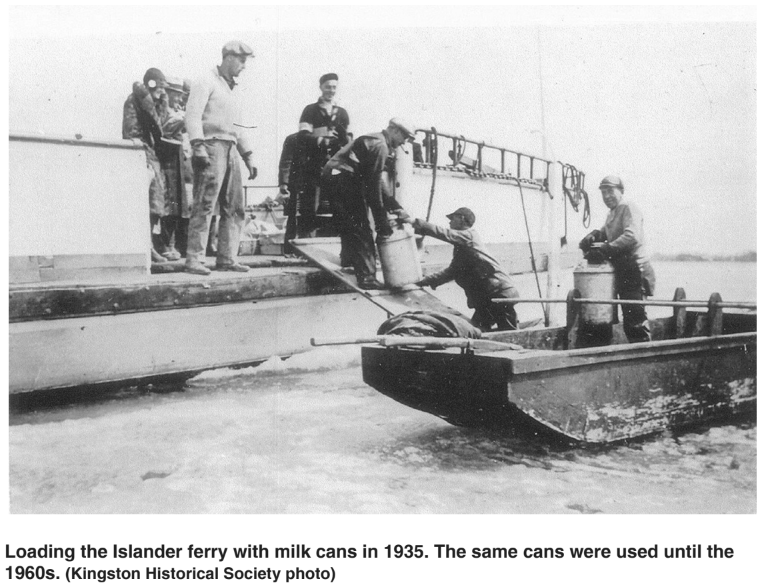 In its heyday, Wolfe Island, named after British General James Wolfe, was home to 139 dairy farms. Today there are two. The gradual decline of dairy farms in many ways mirrors its decline across Canada: business got tougher and farms had to consolidate. The number of Ontario dairy farms dropped from 23,000 in 1976 to 4,400 by 2016. There are now fewer than 4,000.

Case de Ruiter was one of those dairy farmers on Wolfe Island. He now raises Black Angus beef with his wife Trudy. “Dairy farming was a good business and easily managed within the family,” he said. “We raised four kids and had no problem financing them through university.”

With the kids gone to pursue other careers, the increasing cost of production and changes in government polices the de Ruiter’s got out of the milk industry 15 years ago. Case had milked cows for almost 50 years. His parents were Dutch immigrants who arrived on Wolfe Island with their eight children in 1950. They were among the many industrious Dutch who left Europe after the Second World War. 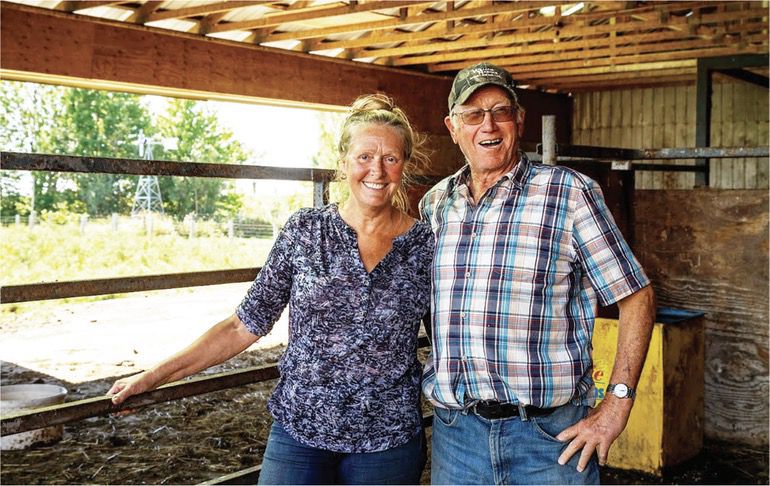 Case and Trudy De Ruiter were Wolfe Island dairy farmers now raising beef. They each came to Canada with their parents in 1950. Trudy grew up on a dairy farm at Joyceville. When she worked at a Kingston restaurant in the winter, her boyfriend, Case, would drive across the ice in his pick-up truck to see her. (Suzy Lamont photo)

Case’s father read articles about the need for farmers in Canada. They found the 100-acre farm on Wolfe Island with a six bedroom house and barns. The farm had been left abandoned for almost 10 years due to insufficient water source but for the de Ruiters this was an opportunity to begin their new life. Case’s father had a large water pond dug (and it continues to be the water source today). Case’s father also worked the shipyards in Kingston for a few years. Choring fell to his mother and the children. One of Case’s earliest memories is holding the oil lamp while his mother milked cows during early morning chores.

Living on the Island in the winter was not easy. Due to ice conditions the ferry to Kingston would stop running about mid-December to mid-March. Those who worked or went to school in Kingston travelled the ice by car or horse and wagon. When the ice conditions were not safe Case’s father (and many others) would stay at boarding houses in Kingston. There was limited ferry service since the 19th century. Then in the early 1960s, the province government put in a bubble system that includes an underwater cable that pumps through a pipeline that sits on the river bed. The movement of the air bubbles rising from the pipeline prevented ice from forming and created a channel for the ferry route throughout the winter. 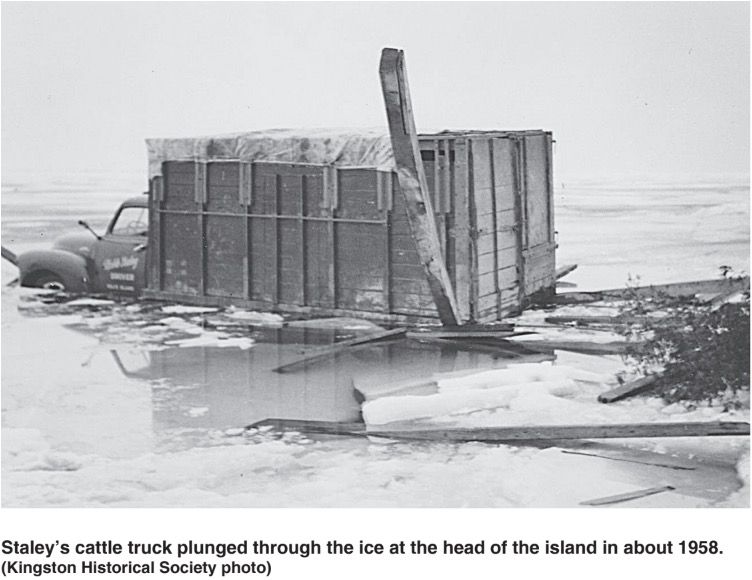 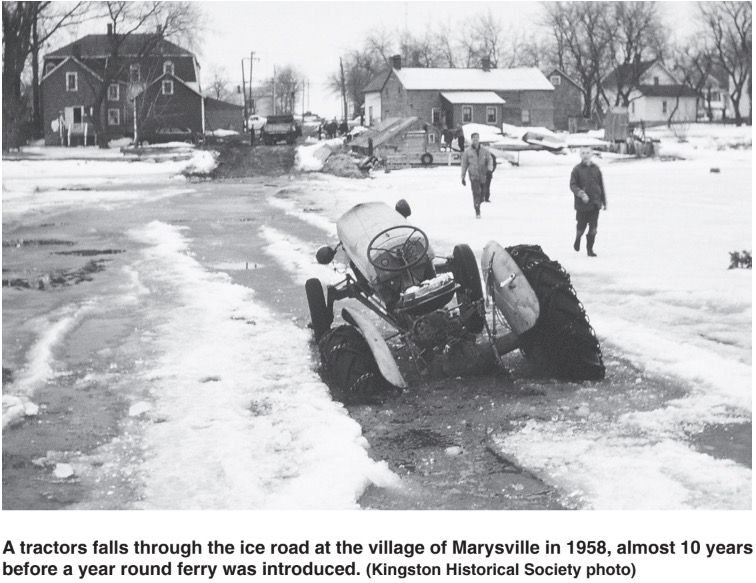 The Island was remarkably self-sufficient. In the 1950s, it hosted at least four privately-owned cheese factories. All the milk stayed on the Island with some cream sold on the mainland. The Alt Brothers, local entrepreneurs, bought out those factories in 1955 and built their own before selling it to Kraft Foods. Kraft expanded the building and over time employed up to 52 full time staff and accepted 12 bulk milk trucks a day from farms on the mainland. Cheese produc-tion continued for many years until 1987 when Kraft moved east to a much larger plant in Ingleside. The Wolfe Island plant finally closed in 2003.

Horse and buggies were a common sight well into the 1950s when Hydro was introduced. Telephones arrived in the 1960s. It was normal for four houses to share one telephone line. The Island had about 10 small schoolhouses in the 1950s, mostly one or two rooms each. There were also three general stores, a bank, two gas stations, an abattoir, butcher shop, a post office and four churches (for three denominations). There was also commercial fishing including three hunting/fishing lodges.

Case was the youngest and stayed home to farm. It was a decision he never regretted. When the family’s truck wore out in 1964, it was then-18-year-old Case’s duty to help his dad buy a new one. “At the time, everybody had the little Chevy 6-cylinder truck for taking milk cans to the factory, but Edwards Ford in Kingston had a Ford with a V8 engine. Dad didn’t drive so he didn’t know what it was. I told him it was the truck we needed. The cost was $2,800. Trucks didn’t come with back bumpers at the time, the cost was $35 extra. Everyone’s tailgate was all banged up, so of course we needed one.”

Before supply management was in-troduced in 1969, Case, like most dairy farmers, took the winters off from milking. Dairy cows need a few months rest at the end of their pregnancy and then produce milk again once the calves are born. Cheese was made and pressed into 45 gallon drums. The drums were loaded on horse drawn sleighs and taken down through the canal across the lake. Once in Kingston there would be a transport truck waiting to load the drums to be shipped to Montreal. Cream was also separated and shipped to Kingston Creamery.

Case was finished chores early one sunny afternoon in February 1979; he drove the ice to Kingston to meet up with some friends. That’s when he met Trudy. Trudy’s parents also immigrated from the Netherlands in 1950 and bought a farm at nearby Joyceville. Trudy worked at a Kingston restaurant, calling a cab when her shift ended late at night. She would ask for a ride to the water’s edge. The driver would look confused until she explained that her boyfriend was driving his truck across the ice to pick her up. Even when the ferry was on schedule ice travel was still faster and common in the winter months until tragedy struck. On January 10, 1984 an Islander went through the ice in her vehicle. She drowned with her two young children. The news hit hard and no one crossed the ice between Wolfe Island and Kingston since.

Around 15 years ago, the de Ruiters were thinking about their next move. Dairy farming had taken its toll physically leaving Trudy with osteoarthritis in her lower back and Case feeling discomfort in his hips and feet. Not quite ready to give up farming they settled on Black Angus beef. Case went to the sales barn with the intention of buying three or four animals, he came home with eight. He then sought out and bought a herd of 30 from Alberta. They used the money from the sale of their milk quota to ‘Beef up the farm’ so to speak. A strong corral system was needed and a truck and trailer. The herd is now about 100 head with 45 new calves born each year, and business is good. A few years ago the de Ruiter’s cleaned up an old granary on the farm built in the 1880s which now serves as a meat store where they sell their grass fed beef freezer packs.

“Buying local is good busi-ness these days,” says Trudy. “We now sell our beef in Kingston and customers come to the farm.” The Island is still flourishing today and so is the de Ruiter farm. There have been a lot of changes over the years but Case still has the oil lamp he used as a child.