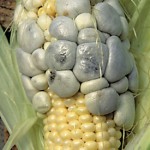 Corn growers might be disgusted by an ugly, blue wart-like mushroom growing out of a kernel.

Normally, two per cent of Ontario corn would get infected with corn smut naturally, which farmers throw away.

But don’t throw away that cob just yet. Not only is it considered a Mexican delicacy, but one researcher believes that smut can be profitable.

“We’re basically taking advantage of something farmers would normally see as a problem, and then creating a market for it,” said Barry Saville, a Trent University professor who has been growing corn smut for three years through an OMAFRA grant.

Although no farmer is growing smut in Canada, Saville estimated that an Ontario farmer could get $5 to $10 per cob. In Mexico, corn smut is used in soups and as a filling in quesadillas and tacos.

Corn smut is best eaten while fresh but can be pickled and preserved. Saville has been working with chefs at Sir Sandford Fleming College and a Mexican restaurant to develop recipes with smut.

Now that the OMAFRA grant is about to run out, Saville is moving on to the next phase: finding Ontario farmers interested in intentionally growing the smut.

“I think we’ve successfully shown it could be a niche market,” said Saville. “Now we have to determine if there’s a future by involving real farmers.”

Farmers grow the corn like they normally would, but when the corn enters the silking stage, the silks are inoculated with the smut. Saville estimates an acre could be inoculated in a morning. A blue mushroom then grows in place of a kernel. The corn is harvested 14 to 20 days later. Like sweet corn, the smut would be harvested at the beginning of August until frost.

“The problem that we have right now is preparing inoculum,” he said. “What we’re hoping to do is get another round of funding so we can develop a much more user-friendly inoculation method.”

The inoculum could be used on grain corn, but Saville prefers sweet corn.

“It has a little bit of a sweet edge and then a mushroomy flavour,” he said. “I think it’s quite tasty.”