Repair jobs while hanging by a rope 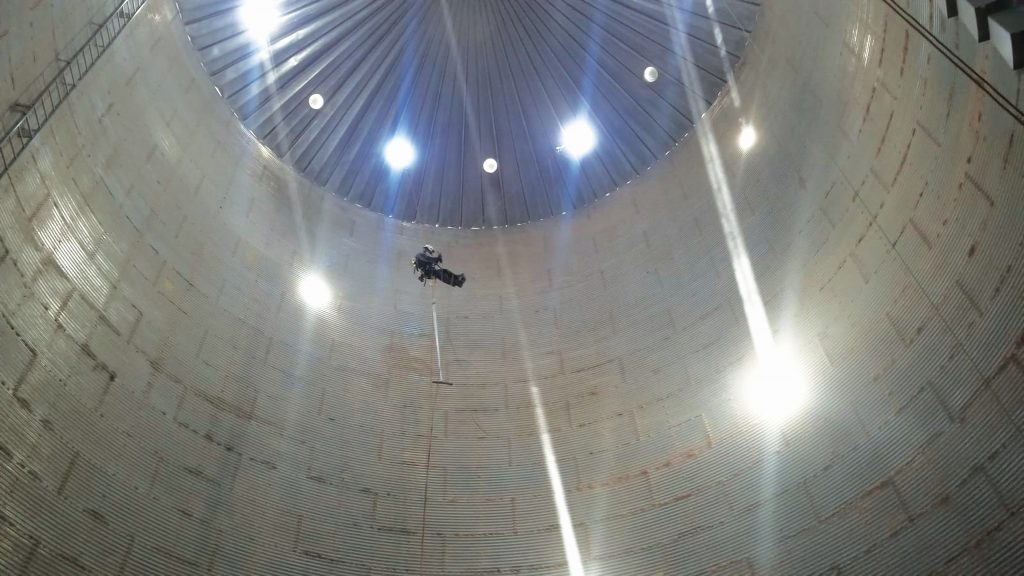 They climb up into high places — without a cherry picker or scaffolding in sight — and do their jobs suspended from ropes.

“The cost savings from traditional means of scaffolds or cranes — even man-lifts in some cases — are quite beneficial to our clients,” says Neve, founder of Orangeville-based Vertical Access Solutions (VAS).

“You may need $200,000 in scaffolding to get up 120 feet, only to get a test reading that otherwise takes three minutes to perform. Or you can take a set of ropes from the top and rappel down to that same location,” Neve explains. “And you’re in and out in half a day.”

The 36-year-old has worked in this unique industry for 15 years, a vocation that has seen him hang from near the top of the CN Tower as well as deep in a potash mine shaft, a 2,000 metre drop into a dark abyss beneath his feet.

He and business partners John Adams — who grew up on a horse farm outside Mitchell — and Greg Cronin have almost 35 years of combined experience in the field.
Some of Neve’s first jobs involved wind turbines. Without maintenance, the blades’ skin can crack and let water into the balsa wood core — especially after a lightning strike — ultimately leading to blade failure.

“There’s an industry term called banana peeling — where the tips will actually split. You just get to the point … If you start to get past the coating material, that’s failed, now you’re into the core material, that’s what also sucks up moisture like crazy and it’s like a ski that gets water into it and splits apart.”

With its combination of resins and fibreglass, he compares fixing and maintaining turbine blades to boat repair. There’s also a specialized tape, made by 3M, that his crews replace on the blades’ leading edge.

He says they’ve also had to repair “quite a few” bullet holes.

Beyond blades, VAS crews have been called upon to repair and clean up leaky hydraulic oil lines that control the brakes on turbines in Ontario, he says.

They employ a double-rope system, each rated at 9,000 lbs, and those ropes are viewed as the worker’s transportation to the job site. Once at their suspended destination, they carry out their ticketed skills, be it welding, millwrighting, composite repair or non-destructive testing.

He says they’ve put their welding skills to work fixing holes in a client’s grain bin, after rappelling into an awkward three-foot gap between it and a neighbouring bin. In a related job, they pressure-washed the inside of a bin where the corn had gotten wet and sprouted.