Rebuilding after the storm

NAVAN — It was nearly six months ago that a vicious thunderstorm system ravaged the McFadden family dairy farm east of Ottawa. Only now are Gordon McFadden and sons Devyn and Travis starting the rebuild of their main milking barn that was completely levelled when the headline-making ‘derecho’ blasted through their rural neighbourhood on May 21st.

The storm, which swept west to east across the province like a high-speed wrecking ball, was back in the news recently as some Ottawa Valley property owners reported that they were still waiting on insurance payouts. At the same time, the province deemed those victims ineligible for help through Ontario’s Disaster Recovery Assistance program because, ironically, they had insurance coverage.

The McFadden farm hasn’t been faced with tardy insurance, though Gordon McFadden told Farmers Forum it struck him as unfair that provincial support was being denied to some of his neighbours.

“I really think they should be offering that support. If this doesn’t qualify, I don’t know what does,” he said.

Across the province, the storm smashed dozens of barns, uprooted hundreds of trees and took out — by Hydro One’s own estimation — 800 hydro poles. Hydro Ottawa reported that the damage, within its jurisdiction, was worse than the 1998 ice storm.

Three McFadden farmhouses have been repaired and one of three dented silos has been fixed. 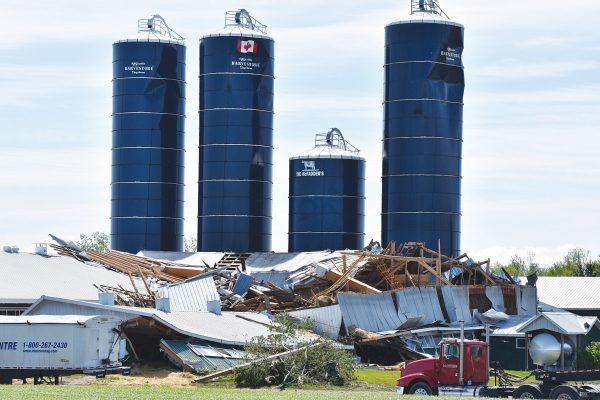 The McFadden barn was completely destroyed after a storm blasted through the area in May. Insured losses total around $3 million.

Trusses also recently arrived for the roof of the most heavily damaged of three machine sheds. A combine was also destroyed when a structure collapsed around it. McFadden estimates the farm’s insured losses at close to $3-million, though he anticipates spending “close to $4-million” as they build bigger and with better technology.

A 130-milking-head free-stall facility — to replace the old 70-milking-head tie-stall — will include robotic milkers.  Construction will halt for the winter and McFadden expects to resume milking on the farm in the fall of 2023.

“It was in our plans to switch to a new barn anyway, but not this soon,” McFadden, 62, said.

The McFaddens managed to save the 110 animals from inside their destroyed barn on the day of the storm. They’re currently being kept at Schouten Farms. About two dozen had to be sold because they couldn’t adjust to their temporary home.

At the nearby Rollins dairy farm, owner Ben Rollins also reported that his insurer has been “coming through” for him after the storm knocked down a silo and sent pieces crashing through the roof of his heifer barn. That structure is temporarily patched but will be properly repaired “hopefully by next spring,” he said.