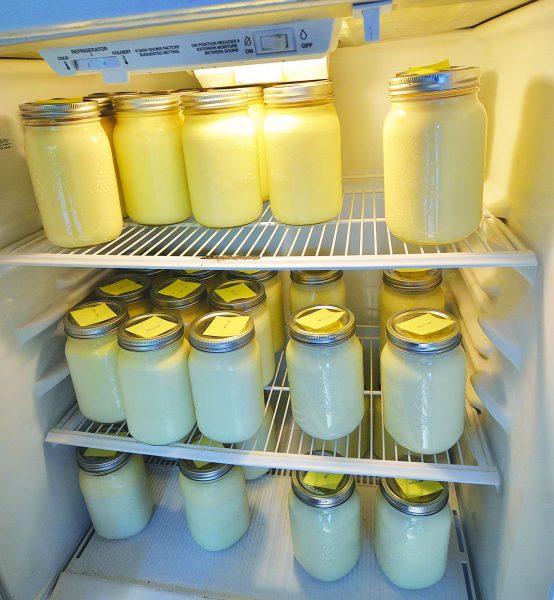 This Renfrew County fridge, owned by cow-share operator Michael Ilgert, was filled with raw milk in 2017 until the province shut the operation down. (file photo)

ONTARIO — Ontario’s non-supply-managed farmers appear to have the backs of their supply-managed brethren on the subject of keeping raw milk out of the hands of regular consumers.

A recent Farmers Forum poll of 50 farmers — targeting only those operators outside of the dairy, egg and poultry sectors — found a solid majority — 82 per cent — agreed with the statement, “All milk should be pasteurized for off-farm sales.”

Farmers Forum conducted the poll in light of recent charges brought against at least one southwestern raw milk provider who argued that demand is so high for raw milk that consumers will drive a long distance to get it.

The poll also found that 62 per cent of respondents disagreed with the statement: “Raw milk is healthy and farmers should be able to sell it if they want to.”

Only 18 per cent agreed that “All milk, including for on-farm consumption, should be pasteurized.”

A handful said that they had grown up drinking raw cow’s milk on a dairy farm.

Beyond the matter of health and safety, support for the mandatory pasteurization of consumer milk is, to some degree, a proxy for support of supply management. Control over supply — a key tenet of supply management — becomes more difficult if all milk doesn’t have to leave the farm for processing.

Advocates for raw milk often look south of the border where New Jersey stands as the only U.S. state with an outright, Ontario-style ban on raw milk sales to consumers, according to farmtoconsumer.org. Every other American jurisdiction allows distribution of raw milk to consumers in one manner or another:
• 17 states permit farmgate sales;
• 10 states permit regular retail store sales;
• 8 states expressly permit cowshare operations;
• 8 states take no action against cowshare operations;
• 4 states allow sales of raw milk for ‘pet food.’